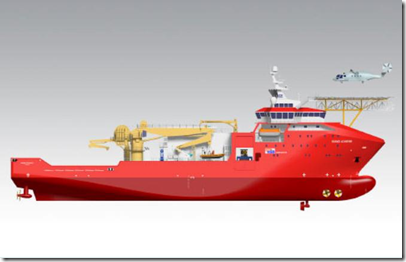 DOF Subsea​, a subsidiary of DOF ASA​ advises that it has secured a campaign of work in the New Zealand Taranaki Basin for the new build DSV Skandi Singapore for an undisclosed sum. The vessel will mobilize for New Zealand on completion of the current work program in Indonesia for Conoco Philips.

Work in the Taranaki Basin involves diving and ROV operations for for AWE Limited, Shell Todd Oil Services Limited and Origin Energy. The program of work will be completed in February 2012.

“The Skandi Singapore is an ideal vessel for the work in the Taranaki Basin. The vessel is the newest DSV in the DOF Subsea fleet and is equipped for extreme weather operation in environmentally sensitive areas. Since delivery, the Skandi Singapore has proven to be a highly capable vessel and is building an excellent reputation with our regional clients.

With the delivery of new vessels into the region, DOF Subsea continues to build a strong project focused organization based in Perth, Australia and Singapore. With a regional project management and engineering capability based around 220 permanently employed engineers and support staff and the highest quality vessels in the region DOF Subsea continues to pursue growth across all subsea market sectors”

Mons Aase, CEO said that the contract awards in Asia Pacific are great news and that the investment in new assets is positive for further growth in the region.