Category Archives: Cartoon of the Day

A cartoon is a form of two-dimensional illustrated visual art. While the specific definition has changed over time, modern usage refers to a typically non-realistic or semi-realistic drawing or painting intended for satire, caricature, or humor, or to the artistic style of such works. An artist who creates cartoons is called a cartoonist.

The term originated in the Middle Ages and first described a preparatory drawing for a piece of art, such as a painting, fresco, tapestry, or stained glass window. In the 19th century, it came to refer to humorous illustrations in magazines and newspapers, and in the early 20th century and onward it referred to comic strips and animated films.

Cartoon of the Day: Gun Running

Cartoon of the Day: “Well, here we go again!”

Leaked Emails: Boehner Worked With Reid to Save Lawmaker Subsidies

House Speaker John Boehner Monday called on colleagues to ban an exemption lawmakers and staff receive for health insurance, but he and his aides had worked for months with Democratic leaders to save the subsidies, leaked documents and emails show.

The documents were provided to Politico, which revealed Tuesday morning that Boehner and aides were working closely with Democratic rivals to protect the payments.

Roll Call had earlier reported that Democrats were mulling divulging the private communications between Boehner Chief of Staff Mike Sommers and Reid Chief of Staff David Krone as proof that Boehner was trying to protect the payments.

The revelations are sure to cause more friction between Boehner and more conservative members of the House of Representatives, who have been pressing for all Obamacare exemptions for Congress to be scrapped.

A possible legislative solution was drafted, the documents show, and they continued to push for a solution from the Office of Personnel Management (OPM).

Further, Boehner and Reid asked for a meeting with President Barack Obama to lobby him for help, the documents show. The meeting never happened, but a senior Boehner aide was able to speak to White House Chief of Staff Denis McDonough about the Speaker’s wish to retain the employer subsidy.

Obamacare requires lawmakers and staff to join insurance exchanges, and the debate over whether they should continue collecting the employer contribution from the federal government has been the source of many heated discussions.

But Boehner put the issue into the government shutdown debate, attaching an amendment ending the subsidies to a House GOP funding bill.

Boehner spokesman Michael Steel told Politico the White House should solve the problem, and that “we always made it clear that House would not pass any legislative fix.”

He said Boehner was aware that Reid and the White House had been discussing the issue and that the speaker’s “fix is repealing Obamacare.”

Boehner’s office said the leak shows how concerned Democrats are.

“Any emails from Mr. Sommers will reflect the Speaker’s position: he voted against ObamaCare, and he wants to repeal Obamacare,” Steel said. “If the Senate Democrats and the White House want to make a ‘fix’ to the law, it would be their fix. The Speaker’s ‘fix’ is repeal. This is just a desperate act by Harry Reid’s staff to protect their own subsidy.”

Reid communications director Adam Jentleson, meanwhile, said his boss worked closely with Boehner and was grateful for his help.

Roll Call reported the communications could back up Democrats’ claims that Boehner’s decision to add an amendment revoking the contributions was a shot at vulnerable Senate Democrats up for reelection in 2014, such as Kay Hagan of North Carolina or Mark Pryor of Arkansas.

Comments Off on Leaked Emails: Boehner Worked With Reid to Save Lawmaker Subsidies

What’s inside your computer…?

We can waste readers’ time with the latest revelations about the NSA’s espionage activities against Americans, highlighted fully in the following WaPo article “NSA broke privacy rules thousands of times per year, audit finds” whose title is sufficiently self-explanatory about how seriously the administration takes individual privacy, or we can just showcase the following cartoon which shows how the Miranda rights have been ‘adjusted’ for the New Normal…

But a cartoon does it best … 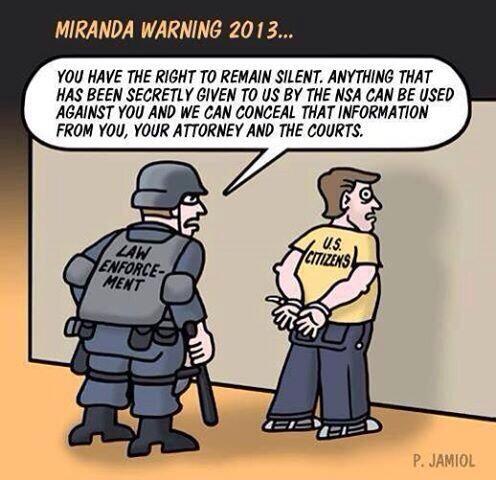 And if you think it’s only 1000s then suckers you deserve what you get!

Skepticism required in the face of Obama’s terror warnings

As new information surfaces about last year’s attack on the U.S. Consulate in Benghazi, Libya, and as the National Security Agency scandal continues to swirl throughout the media, the Obama administration has come out with a worldwide warning about the possibility of serious terrorist attacks.

Please forgive my skepticism. The news media need to dig into the timing and motivation of these warnings, coming as they do against the backdrop of scandals, particularly when the administration has created what it thinks is a win-win situation. Simply put, if the attacks fail to occur, President Obama’s team can claim that they thwarted them. If the attacks do occur, the administration can say it provided fair warning. But that’s a fool’s bargain when dealing with terrorists who can simply strike another day.

In an hour-long broadcast Tuesday, “The Truth About Benghazi,” CNN reported that dozens of CIA operatives were on the ground in Benghazi on Sept. 11 — something the agency has apparently tried to cover up. That’s the night Ambassador J. Christopher Stevens and three other Americans were killed.

CNN reported the CIA may have been moving surface-to-air missiles out of Libya and into the hands of Syrian rebels. The CIA declined to comment on the claim.

Such information brings the Benghazi issue — one the administration thought had lost significant traction — back into public view. If the CIA had people on the ground, why were Stevens and the three others essentially left to die?

The Department of Justice filed a sealed indictment against a Libyan militia leader on the same day CNN broadcast its report on the Benghazi attack. Amazing coincidence? Please forgive my skepticism again.

By promoting its efficiency in picking up the chatter about possible terrorist attacks, the intelligence community may believe it can quiet critics outraged by the revelations of the NSA’s widespread domestic surveillance programs — information leaked by onetime NSA contractor Edward Snowden to Glenn Greenwald of The Guardian.

Once again, pardon my skepticism. The NSA scandal is unlikely to die down anytime soon, despite the terrorist threat taking over the news for this week. And think about it for a moment. Do you honestly believe that the leader of al Qaeda communicates with his right-hand man in Yemen without considering how many other sets of ears may be listening? I strongly doubt it.

Now is the time for reporters to look to their confidential sources about the nature of the terrorist threats. One problem exists — one you might have missed last week. The Justice Department won a key victory in the U.S. Court of Appeals to force a reporter for The New York Times to reveal his confidential sources about information he published in a book on the Iranian nuclear program. That decision creates a significant chill among sources who might want to talk about severity of the current threat.

I spent a decade reporting about Middle East terrorism for Newsweek and ABC News. Terrorists typically have several objectives. One is to inflict death and destruction. Another is to create fear among the civilian population of a stronger adversary, such as the United States, and its allies.

By closing 22 embassies and consulates throughout the Middle East and North Africa and keeping 19 of them shut for the rest of the week, the Obama administration has already given the terrorists a major public relations victory.

Remember during the campaign when Mr. Obama constantly said al Qaeda was on the run? Maybe he wanted to use intelligence information back then to get re-elected. Now maybe he and his administration want intelligence information to provide cover for a variety of scandals. The dots really don’t need to be connected; the connections are all too obvious.

• Christopher Harper is a professor at Temple University. He worked for more than 20 years at the Associated Press, Newsweek, ABC News and “20/20.” He can be contacted at charper@washingtontimes.com. Twitter: @charper51.

Cartoon of the Day

Posted in Cartoon of the Day

Comments Off on Cartoon of the Day

Cartoon of the Day