Comments Off on Worldwide Field Development News May 3 – May 9, 2014

Ocean Installer has been awarded a subsea installation job in the Gulf of Mexico with one of the world’s leading international oil and gas companies on its largest deepwater producing field which sits in over 1800m water depth.

This is Ocean Installer’s first SURF contract in the GoM and marks a milestone for the company in the region.

The project, which involves the installation and testing of umbilicals and associated equipment, will be managed from the Ocean Installer Houston office with onshore preparations starting immediately. Offshore work will take place this summer and Ocean Installer will be utilising the Subsea Construction Vessel (CSV) the Normand Clipper, which is on a long-term charter from Solstad Offshore.

“This is our first SURF job in the GoM and we are very pleased to have secured this work only a year after we established our Houston office and less than four months after introducing our first vessel in the region. We are now looking forward to working closely with our client to execute the project in a safe, high quality and efficient manner,” says Mike Newbury, President of Ocean Installer in the US.

Ocean Installer opened its Houston office in April 2013 and the Normand Clipper arrived in Houston in January. The vessel has been well-received in the market and has since its arrival experienced good utilisation executing several jobs in the regional spot market.

McDermott International, Inc. announced today that one of its subsidiaries has been awarded a contract by the Discovery system for offshore facilities in the Gulf of Mexico. The value of this contract is included in McDermott’s second quarter 2012 backlog.

The project is to deliver new junction facilities for Discovery’s Keathley Canyon Connector™ pipeline system with a 3,300-ton, four-leg platform in 350 feet of water. The unmanned platform will provide pipeline junction facilities for incoming deepwater pipelines from the Hadrian South and Lucius fields and for outgoing shallow-water pipelines to shore.

McDermott’s deepwater combination heavy lift and pipelay vessel DB50 is expected to perform the installation. The DB50 has recently undergone extensive enhancement to its power and propulsion systems, and has a new deepwater lowering system. 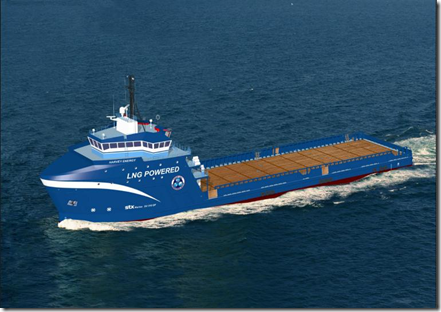 The contract signed today with Trinity Offshore is a follow on to the first two vessel order placed in October of 2011. Trinity will build all four vessels at their Gulfport, MS shipyard where the first Harvey Gulf LNG Powered Vessel hull fabrication was started last week.

In addition to being powered by cleaner burning natural gas, the vessels will achieve “ENVIRO+, Green Passport” Certification by the American Bureau of Shipping. The requirements for this certification include, among others, that the vessels be continuously manned with a certified Environmental Officer, be completely constructed with certified environmentally friendly materials, and have advanced alarms for fuel tanks and containment systems. Along with Harvey Gulf’s other vessels under construction, these will be the first OSV’s to achieve this certification, making them the most environmental friendly OSV’s in Gulf of Mexico.

Harvey Gulf CEO Shane J. Guidry announced the signing: “Harvey Gulf’s decision to become the leader in “Clean” Gulf of Mexico operations has been enthusiastically accepted by oil company executives and was the impetus for adding two additional LNG Dual Fuel vessels to the fleet. These vessels, like their two sisterships, will meet the highest emissions standards that exist today and even higher standards that haven’t been created yet. We recognize the strong stance on environmental protection by the administration in the wake of the oil spill and are doing our part to respond to it and provide our customers support for their environmental commitments.

John Dane III, Trinity’s President and CEO, stated “This follow on order is a significant milestone for our shipyard and will increase employment by hundreds at its peak during the next 36 months.” 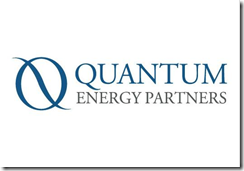 The Renaissance team is led by seasoned Gulf of Mexico executive Jeffrey Soine who will serve as Chief Executive Officer and President. Soine previously served as Executive Vice President of the International Business Unit for Woodside Energy, as well as President of Woodside Energy (USA). Prior to Woodside, Soine was Acquisitions Manager for W&T Offshore where he successfully acquired assets in the Gulf of Mexico. Joining Soine, as Chief Financial Officer and co-founder, is Brian Romere. Romere previously served in the same capacity at Anglo Suisse Offshore Partners and King Ranch Oil & Gas.

Immediately after formation, Renaissance closed on an acquisition of the Ship Shoal 266 field located approximately 75 miles off the coast of Louisiana with an average water depth of 180 feet, from Union Oil Company of California, a Chevron subsidiary. The Ship Shoal acquisition provides Renaissance with a solid production base for the new company, and offers numerous opportunities to increase production over the near term.

Soine commented, “With the recent shift in focus of the majors and large independents to unconventional resources, and continued oil price strength, market conditions are ripe for a well funded, focused acquirer to pursue opportunities on the Gulf of Mexico shelf. Quantum’s strong financial sponsorship and energy industry expertise provides a great complement to our team’s proven Gulf track record.”

“We are excited to be in partnership with such an experienced team focused on the Gulf of Mexico shelf where we see tremendous opportunity to build an acquisition and exploitation platform that we believe will expose Quantum and its investors to superior returns,” said Garry Tanner, Managing Director at Quantum Energy Partners. 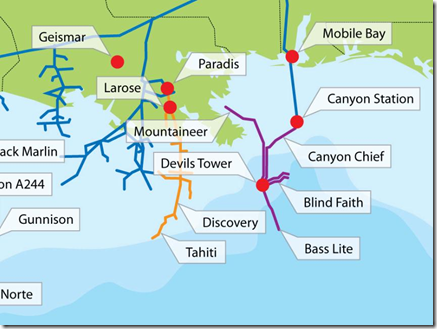 Foster Wheeler AG, has been awarded a contract by Discovery Gas Transmission, LLC to provide design, engineering and technical services for a junction platform, facilities and associated pipelines within the Discovery System at South Timbalier 283, in the Gulf of Mexico.

The Foster Wheeler contract value, which was not disclosed, will be included in the company’s fourth-quarter 2011 bookings.

The platform, located in approximately 350 feet of water, will be a four-pile structure with a two-level deck. It will be designed as an unmanned structure with a control system designed to shut down the facility in the event of an upset condition. The new infrastructure will enable the existing Discovery pipeline to operate at a higher pressure, both before and after the connection of the new Keathley Canyon pipeline.

“This project gives us an opportunity to fully showcase our wide range of capabilities and will build on our track record for delivering complex offshore projects in the Gulf of Mexico,” said Clive Vaughan, Chief Executive Officer, Foster Wheeler Upstream. 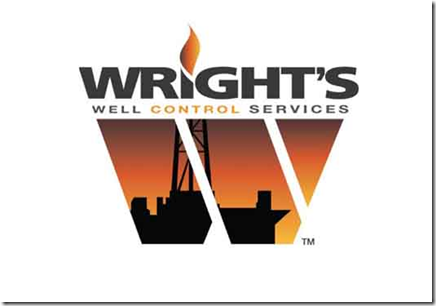 Wright’s Well Control Services (WWCS) has been awarded a contract from an operator in the Gulf of Mexico for the surface plug & abandonment of sixteen wells. Work on this project will commence in the first quarter of 2012 and is expected to be completed by the end of June 2012.

WWCS will use its proprietary custom-engineered equipment for the project including wireline units, pumps, fluid manifolds, cement blenders, gas separators and tanks. These small-footprint spreads allow for conducting rigless plug & abandonments from a vessel of opportunity. WWCS will also provide planning, permitting and project management services.

“We are seeing an uptick in decommissioning work in the Gulf. The awarding of this contract further demonstrates WWCS’ capability to successfully execute multi-well packages for our clients. Our unique small-footprint equipment and experienced crews help customers stay on budget and schedule,” says David Wright, WWCS president. 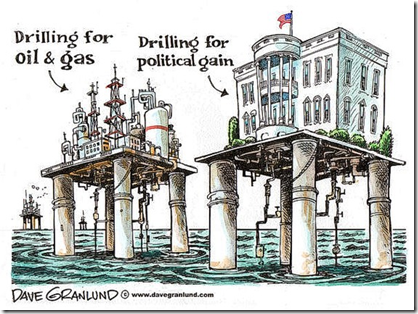 Oil and gas exploration and production in the Gulf of Mexico will some day return to pre-BP spill levels, the president of Chevron North America Exploration and Production Company, Gary Luquette said Thursday.

But the rigorous permitting, safety and verification requirements imposed after the April 2010 BP disaster are here to stay, Gary Luquette said during an interview with The Daily Advertiser before the Greater Lafayette Chamber of Commerce annual banquet, where he was keynote speaker.

The industry hasn’t found its stride since the Deepwater Horizon platform operated by BP off the coast of Louisiana exploded and sunk, creating the largest oil spill in U.S. history.

That disaster, which killed 11 workers, led the federal government to impose a six-month moratorium on deepwater drilling that was followed by more stringent permitting and safety regulations.

“I think activity levels can and will return to pre-Macondo (spill) levels,” he said. “The effort and rigor in getting permits approved won’t return.”

Luquette said that’s a good thing for Louisiana and the industry. The BP disaster tainted the entire industry.

The “new normal” may be too costly for some of the small independent companies to survive, Luquette said.

“In the end,” he said, “the standards are going up. It’s your responsibility to enact them.”

The Gulf of Mexico is still a major source of oil and natural gas and Chevron maintains a presence there, in deepwater and shallow water, said Luquette, a 1978 civil engineering graduate of UL Lafayette.

More than half of the company’s 2012 budget is allocated to Gulf of Mexico activity. Today, Chevron has 10 rigs operating in shallow water, he said.

Lafayette plays an important role in the industry with numerous supply and service companies operating here.

President Obama said last week in his State of the Union address that he wants to end “subsidies” to the oil and gas industry which makes billions of dollars in profits. Luquette said the energy industry creates jobs and creates wealth for the federal government.

In 2011, the oil and gas industry paid $86 million a day to the federal government in royalties, rents and tax revenue, he said. The industry also employs more than nine million either directly or indirectly.

The industry doesn’t need bailouts and such, just a level-playing field, the same so-called subsidies and breaks the federal government provides other U.S. industries and those from foreign nations, Luquette said.

Comments Off on ‘The new normal’