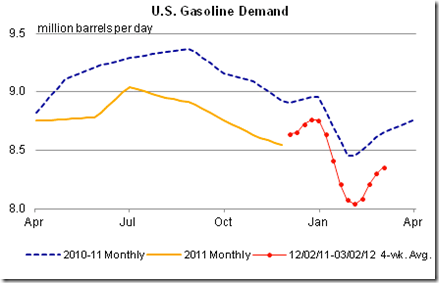 As gas prices take on more and more importance, it’s useful to know which data and data sources are worth checking out.

Here’s an easy one.

The Energy Information Agency has a weekly report called This Week In Petroleum, which combines oil/gas data with some very useful commentary on the latest developments.

For example, this week they hone in on the matter of collapsing non-OPEC supply, and the impact that is having on oil:

Anyway, for your immediate econ needs, scroll to the bottom of the gasoline sub-section, where you’ll find this chart.

As you can see from the red line, daily gasoline demand this year is well off last year’s levels despite many more people having jobs than at this time last year.

And that’s a 4-week moving average. On a week-per-week it would actually look more stark, as demand is down 10% from a year ago this time.

They update this page every Wednesday. Well worth your time checking out.