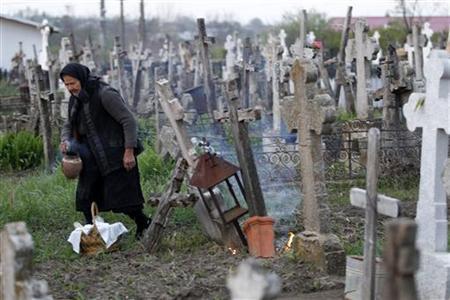 (Reuters) – Five years after joining the European Union, this town 13 miles outside of Romania’s capital is still waiting for the jump in living standards its politicians said membership would bring.

Four out of five people have no indoor toilet or running water. Homes are heated with wood-burning stoves and most people raise animals in their yards to survive. Just one in five of Petrachioaia’s 3,375 inhabitants has a job.

Now Europe‘s newest citizens – the 100 million people in Romania and nine other eastern European countries who have joined the 27-member bloc since 2004 – may have to retire their earlier dreams.

A growing number of economists working in think tanks and investment banks say the economic crisis in Europe has hurt the chances the EU’s poorest members will catch up to, or converge with, living standards in their richer counterparts.

Convergence – the trend for new member countries to move towards Europe’s average GDP per capita – has long been one of the rewards of EU membership.

That was what politicians almost universally promised in the run-up to membership, saying generous development aid from Brussels and foreign investment could help them follow the example of Ireland, whose boom took it from EU laggard to Celtic Tiger.

The former Communist states in eastern Europe appeared to be following the same path. But convergence has now slowed in many places, and economists say it could come to a stop in around 20 years at levels far lower than earlier hoped.

“Catching up is unlikely to proceed as rapidly as we thought before 2008,” said Ville Kaitila, a researcher at ETLA, The Research Institute of the Finnish Economy, referring to the most widely used measuring stick for living standards.

The economic slowdown over the past four years is already taking a toll. Angered by austerity measures and slow progress, some voters have swung away from reform-minded parties in favor of those that promote stronger social safety nets and reject economic reforms.

Constantin Florea, a 63-year-old former mill worker in Petrachioaia who subsists on a military pension of 100 euros a month and by raising animals, sums up the disillusionment.

“I thought they were supposed to raise our wages and pensions and create jobs for young people after we joined,” he said as his heifer munched on grass by the side of a road.

In the Czech Republic, Estonia, Hungary, Latvia, Lithuania, Poland, Slovakia, and Slovenia, people popped champagne and danced in the streets when the EU ushered them into its club eight years ago.

Bulgaria and Romania had to wait another three years for accession, which politicians and economists said would boost their economies.

It had elsewhere. In Ireland economic reforms and a torrent of EU development funds, foreign investment and a lending boom to firms and consumers boosted GDP per capita from 65 percent of the EU average in 1960, 13 years before EU entry, to almost 150 percent in 2008.

At first, it looked like the EU newcomers would go the same way.

In the run-up to membership and immediately after, foreign firms ploughed cash into factories in Hungary, the Czech Republic and Slovakia, making the latter the world’s top car producer per head and, in less than a decade, pushing its GDP per person to 75 percent of the bloc’s average from just 50.

Convergence looked a sure thing. Bulgaria’s GDP per person reached 44 percent of the EU average in 2008, from just 28 percent at the start of the decade. Romania’s rose two-thirds to 47 percent.

The crisis ended the boom, and slowed convergence.

Every country in the region save Poland has had a recession in the past four years. Latvia shrank by more than a fifth from 2008 to 2010, and a two-year contraction in Romania wiped more than 8 percent off its annual output.

Many western European members also suffered recessions. The worst-off – debt-choked Greece – is in its fifth year of what looks set to be a 20 percent contraction.

But it started from a much higher pre-crisis base and its living standards are still roughly 80 percent of the EU average, neck-and-neck with the richest new EU state, Slovenia, and well ahead of the poorest. Ireland too has dropped from its peak but is still roughly at Germany’s level.

Since the crisis, eastern Europe’s governments have imposed austerity measures including layoffs and wage cuts for state workers, to tackle inefficiencies.

Foreign banks have shut off credit. Loans are harder to get. Romania has just re-entered recession.

“When we joined the EU people believed their world will change,” said Decebal Floroaica, a 38-year-old priest who has just opened the first soup kitchen in Pitesti, a southern Romanian town of around 180,000. “Our euphoria was at a maximum and they thought everybody would find jobs abroad. Now we’re realizing maybe the EU is not the land of milk and honey.”

Economists now expect growth to remain below potential for several years, squeezing the ability of countries to gain ground on their richer neighbors.

“Citizens of new member states must have expected fast convergence. As a result they have been disappointed,” Peter Halmai and Viktoria Vasary, Hungarian experts on transition economists, said in an email.

“The convergence machine continues to work, but at a lower level than expected earlier… In certain countries convergence has stopped or slowed down to a great extent.”

In forecasts updated from a 2010 paper published in The European Journal of Comparative Economics, Halmai and Vasary see growth in the new member states outpacing that of the EU’s original 15 countries, with a peak in 2030 or 2040.

That is when a demographic crisis is expected to hit eastern Europe, as a steep decline in the birth rate after the end of communism in 1989 brings a large fall in the workforce as generations born before then retire.

“The real convergence will stop from 2030 onwards and even a moderate divergence from the EU-15 might occur,” Halmai and Vasary wrote.

Though they concede that their long range forecasts are uncertain, the economists believe that in most advanced states – Slovakia, Slovenia and the Czech Republic – the eventual ceiling of convergence will peak just around the EU norm before falling back to below that level.

Poland would top out at 76 percent of the EU average in 2060, they said, far short of last year’s boast by former finance minister Leszek Balcerowicz that Poland could catch Germany in 20 years, and behind even countries such as troubled euro zone member Portugal.

The poorest two, Bulgaria and Romania, would struggle to break the 60 percent barrier in the next 30 years, and the latter could fall back to below present levels, they said.

Zsolt Darvas, a research fellow at Brussels-based think tank Bruegel, said that compared to Ireland’s performance two decades ago, the eastern states are lagging, with some coming to resemble the path of Portugal, Spain and Greece, which made advances but then hit a wall.

Darvas thinks Bulgaria and Romania still “have a lot of chances to converge” but that realistically “in 40-50 years, if they will be around 50 percent of the EU average, that would not be bad for these countries.”

END OF MILK AND HONEY

It’s not as if EU membership has brought no improvements. In Petrachioaia, the main road was paved for the first time in 2008, a year after Romania joined the EU. The last of the town’s four schools got plumbing two years ago.

In Bucharest, the capital, luxury cars have replaced dilapidated Soviet-era Dacias and western brands from Gucci to Starbucks stand where just a decade ago were grim shops labeled “shoes” and “food”.

But problems persist. Romania’s highways link only three cities, and none reach a land border or a port, a red flag for exporting investors.

Only about a quarter of the population hold down steady jobs – there are roughly the same number of pensioners and the same again of subsistence farmers – so the country’s production potential is below its better-off peers.

And while Ireland benefited from EU funds, Romania, dogged by corruption, bureaucracy and a lack of co-financing, has used just 8 percent of the 19 billion euros available since 2007.

Polls show that fewer than half of Romanians now have faith in the EU, down from over two thirds before entry. Tom Gallagher, a professor of east European politics at Bradford University, said that raises the risk of political dissent or a rise of radical parties if people become frustrated with the wealth gap.

“Romania will be a permanent drag on the EU if we continue to fall behind, and the country faces long-term underdevelopment and decay unless there is a relaunch of the partnership with the EU,” Gallagher said.

“Living conditions can get better, but that may take 50 years,” he said. “So maybe my grandchildren will taste a more civilized life.”