Bexar facility is ‘big deal for us’ 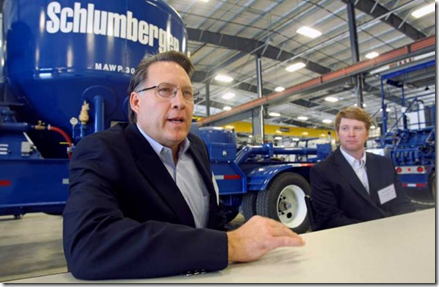 Robert Drummond, president of Schlumberger North America, (left) talks about his company as Jeremy Aumaugher, south division operations manager, listens to questions about expansion of their business to support clients in the Eagle Ford Shale.

Schlumberger, the world’s largest oil-field services company, threw open the doors Wednesday to its new operations plant in southern Bexar County, where it was drawn by proximity to the Eagle Ford Shale.

“This is a big deal for us,” Robert Drummond, president of Schlumberger North America, said as he stood before shiny trucks in a spic-and-span warehouse that’s part of a $19 million investment.

The new facility is a critical addition to Schlumberger’s south division operations, which encompasses the New Mexico, West Texas and South Texas, he said.

Construction of the company facilities, which occupy three sites on Fischer Road near the intersection of Interstate 35 South and Loop 410, began in December 2010, company officials said.

Schlumberger — which is based in Houston, Paris and The Hague, Netherlands — employs almost 400 in the San Antonio area, a total that is likely to grow to 500 employees in the coming months, officials said.

San Antonio’s nearness to the shale has meant that the company hasn’t had a problem recruiting employees, whose work ethic “is excellent,” Drummond said.

Salaries at the operations center range from $25,000 to $85,000 a year, said Jeremy Aumaugher, south division operations manager for pressure pumping. Employees also are eligible for performance bonuses, he said.

However, some employees may work 60 hours a week or more and be away from home for periods of time, Aumaugher said.

The company’s biggest labor needs are for truck drivers, while mechanics and electronic technicians make up another key category, he said.

“We’re in competition, obviously, with others who do the same work as us,” Drummond said. “We want to be the employer of choice in North America, meaning not only (in) compensation but work conditions, facilities and safety environment.”

Schlumberger’s center will handle its customers’ demands for pressure pumping, which is used to enhance the flow of oil and natural gas in hydraulic fracturing. It also will provide cementing services, a process used to surround a well’s casing, or pipe.

Schlumberger’s operations occupy 60 acres. One facility occupies a 35-acre site that includes bays for maintaining, fueling and washing trucks. There’s a 15-acre bulk plant capable of storing 20 million pounds of sand for use in hydraulic fracturing, a cement blending area, a 39,028-square-foot warehouse, a laboratory and a support and training facility on 10 acres.

At a ceremony Wednesday at Schlumberger, Economic Development Foundation Chairman Henry Cisneros said: “This is a great, global company doing important work. The more you can succeed here, it is ‘mission accomplished’ for us.”

As drilling in the Eagle Ford Shale has exploded, a number of oil-field services companies have established a presence in the region, including Houston-based Halliburton Co. and Baker Hughes Inc., Switzerland-based Weatherford International Inc. and Canada-based Sanjel.

In addition, a number of oil production companies drilling in the Eagle Ford Shale have opened offices in San Antonio.

Comments Off on Bexar facility is ‘big deal for us’

Pioneer Drilling Co. PDC +6.41% has acquired a privately held provider of coiled tubing services for roughly $110 million in cash, a purchase the company said it expects to add to earnings this year.

“After studying coiled tubing for the past couple of years, we believe this new service offering has expansion opportunities as well as cross-selling opportunities with our existing business,” Locke said.

Go-Coil operates a fleet of 10 coiled tubing units, seven of which are onshore units. Current operations are located in Louisiana, South Texas, Oklahoma, and Pennsylvania.

Pioneer, which provides contract land drilling services to oil and gas operators, in November reported it swung to a third-quarter profit with help from a 38% jump in revenue.

Shares closed Friday at $9.68 and were inactive in premarket trade. The stock is up 51% in the past three months.