Exxon Mobil Corporation is commencing development of the Julia oil field in the Gulf of Mexico, the oil giant announced yesterday in a press release.

Capital cost for the project, which is expected to begin oil production in 2016, is estimated to be more than $4 billion. The field was discovered in 2007 and is estimated to have nearly six billion barrels of resource in place.

“The development of Julia will provide a new source of domestic energy and well-paying jobs over the next several years,” said Neil W. Duffin, president of ExxonMobil Development Company. “Access to resources such as Julia will contribute to U.S. energy security for many years to come.”

The initial development phase is being designed for daily production of 34,000 barrels of oil and includes six wells with subsea tie-backs to the Jack & St. Malo production facility operated by Chevron U.S.A. Inc. Julia project front end engineering design has been completed and the engineering, procurement and construction contracts have been placed.

“Julia is one of the first large oil discoveries in the ultra-deepwater frontier of the Gulf of Mexico,” said Duffin. “This resource is located more than 30,000 feet below the ocean’s surface. Enhanced technologies will be deployed to ensure the safe and environmentally responsible development of this important energy resource.”

ExxonMobil, the operator, and Statoil Gulf of Mexico LLC each hold a 50 percent interest in the Julia unit.

Over the past decade, ExxonMobil has drilled 36 deepwater wells in the Gulf of Mexico in water ranging from 4,000 feet to 8,700 feet.

Comments Off on Gulf of Mexico: Exxon, Statoil to Splash $4 Bln on Julia Development 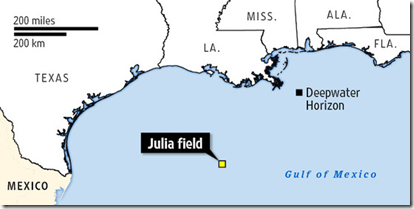 The accord “will allow ExxonMobil to develop this very large, but technically challenging, resource as quickly as possible using a phased approach,” Patrick McGinn, a spokesman for Irving, Texas-based Exxon, said in an e-mail yesterday.

Exxon sued Aug. 12 over a ruling by the department that canceled Gulf of Mexico leases for the so-called Julia Unit. The company and the government entered into settlement agreement on Dec. 30, according to a filing yesterday in U.S. District Court in Lake Charles, Louisiana.

Exxon said in its complaint that it sought a suspension for its Julia leases in 2008 because of drilling complexity. It cited federal regulations that allow oil oil producers to suspend production in their fields, partly “to facilitate proper development of a lease.”

The Interior Department denied the request in 2009, stating that the company“had not demonstrated a commitment to production” according to court papers. Unsuccessful appeals followed.

As part of the settlement, the Interior Department granted a suspension of production for the leases from Dec. 13, 2008, to Oct. 31, 2013. The department will grant a second suspension until Aug. 31, 2014, if Exxon and Statoil ASA (STL), a partner in Exxon’s Julia fields, remains in compliance with the terms of the agreement and takes certain steps toward production, according to court documents.

Exxon and Statoil agreed to pay a yearly fee on the original leases of $650 per acre until 87.5 million barrels of oil are produced from the fields. The first fee will be owed for 2011, according to court documents. The minimum royalty rate for the leases was increased to $11 per acre and the yearly rental rate increased to $16 an acre.

“The Julia project will play an important role in meeting America’s energy demand,” McGinn said in the e-mail. “The initial phase of the project is expected to produce more than 175 million barrels of oil through six production wells.”

Melissa Schwartz, a spokeswoman for the Interior Department, said in an e-mailed statement that the proposed settlement affirms the regulatory process, “provides incentives for timely and thorough development of the leases, and secures a fair return on those resources to the U.S. Treasury.”

Comments Off on Exxon Settles Lawsuit Over Gulf Offshore Oil Lease Against U.S.