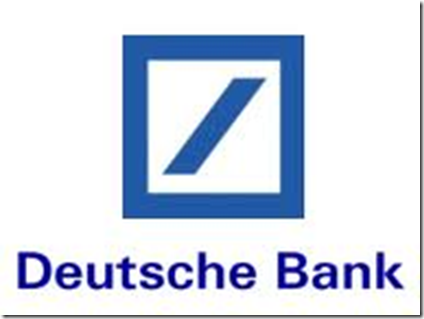 Nov. 21 (Bloomberg) — You’ve probably never heard of Taunus Corp., but according to the Federal Reserve, it’s the U.S.’s eighth-largest bank holding company. Taunus, it turns out, is the North American subsidiary of Germany’s Deutsche Bank AG, with assets of just over $380 billion.

Deutsche Bank holds a large amount of European government and bank debt; it also has considerable exposure to lingering real estate problems in the U.S. The bank, therefore, could become a conduit for risk between the two economies. But which way is Deutsche Bank more likely to transmit danger — to or from the U.S.?

By any measure, Deutsche Bank is a giant. Its assets at the end of September totaled 2.28 trillion euros (according to the bank’s own website), or $3.08 trillion. In the latest ranking from The Banker, which uses 2010 data, Deutsche was the second- largest bank in the world by assets, behind only BNP Paribas SA.

The German bank, however, is thinly capitalized. Its total equity at the end of the third quarter was only 51.9 billion euros, implying a leverage ratio (total assets divided by equity) of almost 44. This is up from the second quarter, when leverage was about 36 (assets were 1.849 trillion euros and capital was 51.678 euros.)

Even by modern standards, this is very high leverage. JPMorgan Chase & Co. has a balance sheet about 20 percent smaller than Deutsche Bank’s, but more than twice as much Tier 1 capital, an important indicator of a bank’s financial strength. Bank of America Corp., whose weakness is a serious worry in the U.S. today, has twice Deutsche’s capital. (These comparisons use The Banker’s ranking of the top 25 banks.)

Globally, Deutsche’s capital ratios are relatively healthy, judging by the banking industry’s standard measures. At the end of the third quarter, its Tier 1 capital ratio was 13.8 percent (up from 12.3 percent at the end of 2010) and its core Tier 1, which excludes hybrid debt that can convert into equity, was 10.1 percent.

How does such a highly leveraged bank become “well- capitalized”? The answer is that “risk-weighted assets” were 337.6 billion euros as of Sept. 30. But what is a low risk- weight asset in the European context today? Incredibly, it is sovereign debt, which of course is far from riskless at the moment.

Still, the bigger risks are probably in the U.S. Deutsche Bank is a significant trustee for mortgages, having been heavily involved in the issuance and distribution of mortgage-backed securities during the housing bubble. Yves Smith, writing on the naked capitalism.com blog, says Deutsche Bank is one of the U.S.’s four biggest securitization trustees. Many questions on whether paperwork was done properly and whether the rights of investors have been protected hang over these trusts.

Let’s take a look just at Taunus Corp., named after a range of mountains outside the parent bank’s Frankfurt headquarters. The latest figures (from the Fed data, using the consolidated financial statement at the end of the third quarter) show Taunus with total equity capital of just $4.876 billion. This implies an eye-popping leverage ratio of around 78.

Why would the Federal Reserve and the new council of regulators known as the Financial Stability Oversight Council allow Deutsche Bank to operate in the U.S. with sky-high leverage — with its huge implied risk to the rest of the financial system? Presumably, in the past, U.S. authorities have taken the view that Deutsche Bank had a strong enough balance sheet worldwide that more capital could be provided to its American subsidiary, if needed.

Such a presumption now seems questionable, at best. Earlier this year, Bloomberg News reported that Taunus needed almost $20 billion of additional funds to meet U.S. capital standards, and that Deutsche Bank was trying to declassify Taunus as a bank- holding company to avoid capital requirements entirely. It’s unclear where this process now stands, but it’s also not obvious how declassification would help U.S. or global financial stability. Financial reform advocates hopefully will press hard on this issue.

All of this raises troubling questions. Have U.S. bank supervisors really satisfied themselves, through onsite inspections, that Deutsche Bank’s risk weights accurately reflect market conditions and the increasing structural weakness of the euro area? Can U.S. regulators document their satisfaction beyond the materials produced for the European Banking Authority, which earlier this year oversaw stress tests that pronounced now-collapsed Dexia as well-capitalized? (Actually, Dexia had stronger capital ratios than Deutsche Bank.)

In their prescient, pre-crisis book, “Too Big To Fail” (not to be confused with the more recent Andrew Ross Sorkin book of the same title), Gary H. Stern and Ron J. Feldman, in 2004 nailed the incentive distortions that encouraged risk-taking and brought the financial sector to its knees. No one else came close to them in getting this right. Included in their analysis are examples of banks that could have been regarded as having moral hazard issues because of their size. Deutsche Bank is No. 4 on their list of large, complex banking organizations by asset size.

This dog did not bark during the 2008 crisis, partly because most foreign governments were seen as having strong enough balance sheets to back their banks’ worldwide operations. But this is no longer necessarily true for euro-area governments.

Even in 2008-2009, this may have been illusory. According to published reports, Deutsche Bank received considerable assistance from the Federal Reserve, including $11.8 billion through the American International Group bailout and $2 billion through the Fed’s discount window. Deutsche was the second- largest discount-window borrower and the largest user of the Fed’s Term Asset-Backed Securities Lending Facility during the crisis.

Deutsche Bank and, if necessary, the German government should be required to inject substantially more capital into Taunus. Allowing business as usual is asking for trouble, particularly as Deutsche wants to remain focused on relatively risky investment banking. Recently it named as chairman Paul Achleitner, the finance director at Allianz SE, the German insurance company, and an ex-Goldman Sachs executive, worrying even some of its shareholders.

This would be a good time for Congress to dig more deeply into the risks that Deutsche Bank poses to financial stability in the U.S. and around the world.

(Simon Johnson, who served as chief economist at the International Monetary Fund in 2007 and 2008, and is now a professor at the MIT Sloan School of Management and a senior fellow at the Peterson Institute for International Economics, is a Bloomberg View columnist. The opinions expressed are his own.) 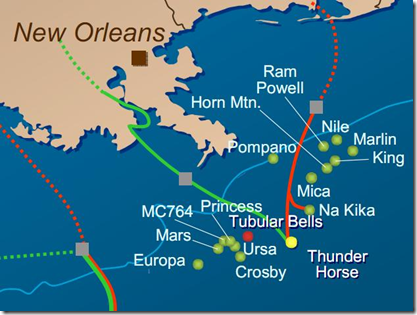 BP revealed on Friday the agreement to sell its interests in the Pompano and Mica fields in the deepwater Gulf of Mexico to Stone Energy Offshore, LLC, a subsidiary of Stone Energy Corp. for $204 million in cash.

Completion of the sale is subject to the pre-emption rights of various co-working interest owners. The companies expect to complete the sale in 2012.

BP group chief executive Bob Dudley said: “We continue to make progress in our divestment programme as we focus on BP’s areas of strength around the world. The sale of these mature assets will allow us to concentrate our efforts on the major production hubs and significant growth opportunities that BP has in the Gulf of Mexico.”

On completion of the transaction BP will continue to operate seven production platforms in the Gulf of Mexico, producing from some of the largest deepwater oil and gas fields ever discovered. Among BP’s Gulf of Mexico assets are the giant fields Thunder Horse, Atlantis and Mad Dog, each of which have long production profiles and development programs.

The Pompano Field is eight miles long, located within water depths ranging from 1,100 feet to 2,200 feet. Given the distance and depth range, the Pompano owners elected to use proven technology and placed a fixed platform in shallow water at the northern end of the field.

The official deadline for action by the Joint Select Committee on Deficit Reduction is Wednesday, the day before Thanksgiving. The real deadline is Monday night, since any plan has to be posted for 48 hours before it’s voted on. So conversations this weekend revolved around how to shut this turkey down. Aides expect some “Hail Mary” offers on Sunday, and there’s something on the stove that could be inoffensive to both sides. But the committee may not even have a fig-leaf agreement to announce. Total, embarrassing failure. The markets and the country will hate it.
The most likely scenario: The co-chairs, Sen. Patty Murray (D-Wash.) and Rep. Jeb Hensarling (R-Texas), on Monday will issue a short joint statement with the basic message: “This marriage is over.” Other possibilities are to hold a short going-out-of-business hearing, or to vote down a Republican proposal and a Democratic proposal. But one aide says: “Few, if any, one either side, want a final, ugly food fight … The chairs are working to figure out how to put the appropriate period on the sentence and do so in the most dignified manner possible. … [Don’t expect] a showdown of dueling voters and a ton of fingerpointing.”

For weeks the committee has been stalemated over taxes — with Democrats refusing to extend the Bush tax cuts as part of an agreement, and Republicans unwilling to do so without it (though even their offers of new revenues didn’t have the support of many in their caucus).

Failing to reach the $1.2 trillion in cuts to the federal deficit will result in automatic cuts of the same amount.

The committee was in many ways the last best hope of reaching a sensible solution to deficit reduction — with no filibusters allowed, and a narrow timetable forced on them by stiff penalties for failure. But many in Congress now believe that it would be better to engage in cuts that the Department of Defense has called a threat to military readiness, instead of reaching across the aisle.

From an economic perspective, this outcome may be among the worst — with the spending cuts almost entirely cutting actual programs, as opposed to the areas of waste that the committee has already identified.

Several members of the committee will be appearing on the Sunday morning news shows this morning. Check back for updates.