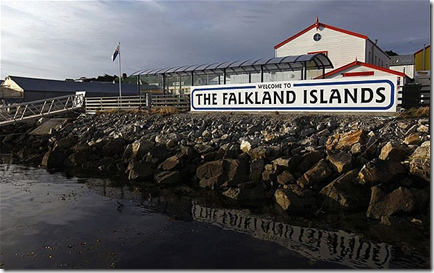 The British Government has told the Falklands and companies working there that it will defend the protectorate against Argentine aggression. Photo: Reuters

The Foreign Office has sought to reassure British and American banks threatened by the Argentine government over their involvement in the Falkland Islands oil industry.

The Government, in a move designed to ease concern among the investment community about the Argentine legal threats, has written to some 15 banks and oil exploration companies operating in the region.

In the new letter, the Foreign Office says it is “deeply sceptical” that Argentina would be able to enforce “any penalties” in courts outside its own borders. It adds that the government of the Falklands “is entitled to develop” oil and fishing industries in its own waters “without interference from Argentina.”

“The British Government has no doubt about our sovereignty over the Falkland Islands and surrounding maritime areas,” it adds.

News of the letter follows The Sunday Telegraph’s revelation that the Argentine government had written to banks involved in the Falkland oil industry threatening them with legal action. In writing to the banks concerned, including broker Oriel Securities and Royal Bank of Scotland, the Government has sought to not jeopardies the fledgling Falkland oil industry.

Edison Investment Research, which has published research on the value of oil around the islands , slammed the attempts to silence it.

“Edison Investment Research firmly believes in the right for all financial institutions, publishers and in particular financial research houses such as ours to be able to exercise their right to provide independent analysis of all quoted companies wherever they are listed and wherever their operations may be carried out,” said Edison’s Fraser Thorne.