Vestnes FMT has received a contract for 4 newbuildings from Ulstein Verft in Ulsteinvik. Newbuildings 296, 297, 298 and 299, being built for Blue Ship Invest, will be equipped with state-of-the-art “Willy” furniture packages.

These four newbuildings are medium-sized platform supply vessels (PSV) of PX121 design and are scheduled for delivery from Ulstein Verft in 2013.

Vestnes Ocean is a turn key supplier of accommodation solutions for the maritime industry. The company has developed its own concept of ship furniture named “Willy”, especially made for the life onboard, together with the designers Ralston & Bau.

Comments Off on Norway: Vestnes FMT Secures Another Contract from Ulstein

ULSTEIN has over time been cooperating with the American shipbuilding group Vigor Industrial in the development of the conceptual design for a coastguard vessel (OPC – Offshore Patrol Cutter). Vigor is now announcing ULSTEIN’s SX151 design in the United States as part of a campaign aimed at the U.S. Coast Guard, that plans to renew its fleet with up to 25 new ships.

“We have worked together with Vigor for two years, and have developed a concept we have great faith in. The ship is 100 metres long and 16.4 metres wide and has a top speed of 22 knots. A typical operating speed can vary from 5 to 22 knots, and the ship is therefore equipped with a combined diesel mechanic / diesel electric propulsion system. The ship accommodates 124 persons, is equipped with a helicopter deck and hangar, and a hangar for three rescue boats,” says Deputy CEO, Tore Ulstein, responsible for Market and Innovation in Ulstein Group.

This is a long-term project: “Several yards are currently sending their prospects to the Coast Guard. Towards the end of 2014 or beginning of 2015, the Coast Guard will award the contract”, says Ulstein.

In recent years, Inge Gjelsten has been Captain on board several newbuilds: “’Blue Fighter’ is the best of them by far,” he states. He is soon to retire, and concludes: “If I were a newly-educated captain planning for a career on a supply vessel in the North Sea, a vessel of this type would be my preferred choice.”

The medium-sized platform supply vessel ‘Blue Fighter’ of PX121 design from ULSTEIN was ordered based on trends in the North Sea market. After only days of operation in the spot market, ‘Blue Fighter’ entered a one-year contract, with an option for an additional year, with the American oil company Apache for work in the North Sea.

Remøy Shipping has technical and commercial management of the vessel and feedback on her seakeeping abilities is invariably positive.

“All on board agree that this is a remarkably efficient and comfortable vessel in all weather conditions. Wind and seas have little impact on the vessel’s performance compared to conventional PSV s. We can compare performance directly when steaming on the same tracks to the oil fields: With the same weather conditions and 3-5 metres head sea within 30 degrees of the bow, our ship can easily and comfortably maintain a speed of 12-13 knots, while the other vessels have to reduce their speed to 7-8 knots. The higher speed is a result of the ‘X-BOW® effect’. Also, due to the position of the stabilisation tanks on board, ‘Blue Fighter’ operates extremely well when wind and seas approach from the side.”

Ulstein Verft delivered the vessel to Blue Ship Invest in January this year.

The platform supply vessel was launched from the dock after the final paintwork had been carried out inside the dockhall. The vessel is due for delivery in August this year.

Ulstein Verft was contracted to build the two vessels for Blue Ship Invest, a shipping company in ULSTEIN, at the end of 2010, and the first vessel, M/V Blue Fighter was delivered in January 2011

The vessel is built with the X-BOW® hull line design, which is particularly well-suited for this type of vessel. The X-BOW offers efficiency over a wide draught range, which is important for PSVs as they frequently operate with varying loads. Moreover, the X-BOW has unique, advantageous qualities in terms of motion and propulsion efficiency in heavy seas. Both the hull and choice of propulsion system make the vessel particularly suited for North Sea and North Atlantic conditions. The vessel is equipped with a dynamic positioning system IMO Class II.

The ship has a length of 83.4 metres and a beam of 18 metres. It has a cargo deck of 875 square metres and a load capacity of 4200 tonnes (dwt). The ship meets the requirements of DNV’s Clean Design notation and is prepared for fire-fighting class Fi-Fi II. It has a maximum speed of circa 15 knots and modern accommodation for 24 persons. 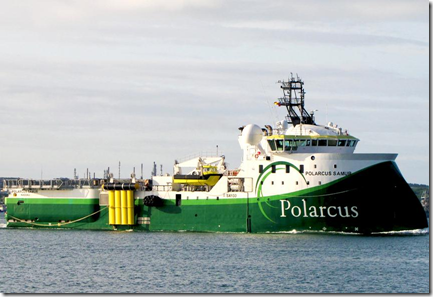 The project, to be acquired by POLARCUS SAMUR, will commence in late January and is expected to run for approximately 40 days.

Comments Off on Polarcus Samur En Route to West Africa

The project, to be acquired by ULSTEIN SX124 design vessel, Polarcus Nadia, will start this month and is expected to run for approximately 30 days.

Delivered in 2009 Polarcus Nadia is an ultra-modern 12 streamer 3D/4D seismic vessel. Built to the ULSTEIN SX124 design and incorporating the innovative ULSTEIN X-BOW® hull, this vessel combines the latest developments in maritime  systems with the most advanced seismic technology commercially available. The vessel is also amongst the most environmentally sound seismic vessels in the market with diesel-electric propulsion, high specification catalytic convertors, double hull, and advanced bilge water cleaning system. This vessel complies with the stringent DNV CLEAN DESIGN notation.

Together with Ulstein Sea of Solutions, NLI are now well established in the derrick and drilling market and have developed an integrated derrick with drill floor system for installation on vessel decks.

“This type of drilling package is a familiar product on the global market, but this concept is unique in that it involves an integrated system providing several benefits and enhanced working conditions”, says Marketing Director Sigve Barvik at NLI.

The derrick system is equipped with cables and pipes integrated within its rear legs. This greatly reduces equipment maintenance requirements. A lift is installed in one of the front legs which can stop at six different levels – making it easier for workers to gain access with equipment during servicing. The system thus also enhances the safety of deck operatives. A further major benefit is that the upper derrick structure is retractable, allowing the vessel to pass below bridges without the need to dismantle any of the equipment.

The new derrick system is called Northern Light and was unveiled at the OTC oil expo in Houston in May this year. NLI and Ulstein showcased a physical model of the system at OTC, and the new concept attracted considerable attention. Several companies have already expressed an interest in the new concept and we will be following up these enquiries closely.

”We believe this system will make a big breakthrough in the global market”, says Barvik. “There are several competitive advantages in building a complete and integrated derrick. There are major advantages to a derrick with drill floor that can be hoisted on board a vessel in one lift, fully tested and ready for use”, he concludes.

Comments Off on NLI and Ulstein showcase new derrick concept

Ulstein Verft delivered the platform supply vessel Rem Mist to Remøy Shipping on 5 May 2011. The vessel, which is yard number 289 from Ulstein Verft, was delivered one day before the contracted date.

In his speech at the delivery, managing director of Remøy Shipping, Per Gunnar Jarnes, emphasised ULSTEIN’s ability to deliver advanced vessels on time – even before time in this instance. “In order to be successful in the global market, it is vital to focus on and develop what one does best – and that is what ULSTEIN has done with great success”, said Jarnes.

The vessel is a large PSV equipped with multi cargo tanks for dry media and liquids. The exhaust system grants a 360 degree view from the bridge. The exhaust is led through the ship side and escapes at the water surface, instead of going through the wheelhouse roof.

Rem Mist is the second vessel ULSTEIN delivers to Remøy Shipping. Her sister vessel, Rem Hrist, yard number 288, was delivered at the beginning of March this year. Both vessels have eight year contracts with Statoil in the North Sea.