By Walid Shoebat and Ben Barrack

Recent news of a chemical weapons attack in Syria smacks of desperation. The question comes down to who is most desperate right now, the Assad regime or the Muslim Brotherhood rebels? Consider that since June, Assad’s forces have been winning. According to a CBS News report from last month, victories for the rebels had become “increasingly rare” and that the Muslim Brotherhood-backed opposition fighters were sustaining “some of their heaviest losses” near Damascus.

The New York Times echoed this sentiment, even saying that before gaining the upper hand, concerns were that Assad would use chemical weapons; he did not.

In fact, even before Assad’s forces gained the momentum, a UN official reportedly found evidence of rebels using chemical weapons but no evidence Assad’s regime did. This, from a Washington Times article by Shaun Waterman dated May 6, 2013:

Testimony from victims strongly suggests it was the rebels, not the Syrian government, that used Sarin nerve gas during a recent incident in the revolution-wracked nation, a senior U.N. diplomat said Monday.

Carla del Ponte, a member of the U.N. Independent International Commission of Inquiry on Syria, told Swiss TV there were “strong, concrete suspicions but not yet incontrovertible proof,” that rebels seeking to oust Syrian strongman Bashar al-Assad had used the nerve agent.

But she said her panel had not yet seen any evidence of Syrian government forces using chemical weapons, according to the BBC, but she added that more investigation was needed. {emphasis ours}

Today, while the rebels are more desperate than they were at the time of that article, evidence of rebels using chemical weapons is available; evidence Assad’s regime has used them is not.

That doesn’t square with a video uploaded on August 23, 2013, in which Free Syrian operatives threatened to launch chemical weapons: 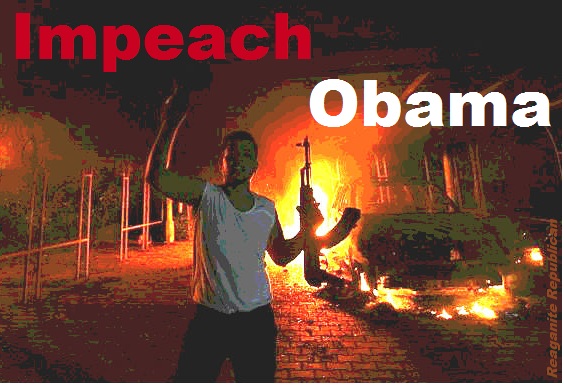 It has been widely reported in Egyptian media that one of the leaders in the attack against the Benghazi consulate on September 11, 2012 was Mohsen Al-Azazi.

According to Ahmed Moussa, a former high ranking intelligence official with the Egyptian government and several other sources, Al-Azazi’s passport was found in the house of Khairat Al-Shater, the Number Two man in the Muslim Brotherhood hierarchy, now under house arrest in Egypt by the Egyptian military. Al-Azazi has been implicated as the actual assassin of Ambassador Christopher Stevens.

But this is only the beginning of a blockbuster story.

According to Khairat Al-Shater’s son, Saad Al-Shater, his father is in possession of information linking Obama with criminal activities tied to the Muslim Brotherhood.

As reported by at least six Arabic news sources:

In an interview with the Anatolia News Agency, Saad Al-Shater, the son of a Muslim Brotherhood leader, the detained Khairat Al-Shater said that his father had in his hand evidence that will land the head of United States of America, President Obama, in prison.

Further, as reported by several Arabic news sources, citing a Libyan Intelligence document dated September 15, 2012, six Egyptians from the terrorist group Ansar al-Sharia based in Egypt were arrested for the Benghazi attacks and confessed that then-Egyptian Muslim Brotherhood President Mohammed Morsi was behind the attack. Additionally, Muslim Brotherhood researcher Walid Shoebat has obtained a copy of the Libyan Intelligence document and confirms Mohammed Morsi is named in the confession.

Per Shoebat’s translation of the document:

The most distinguished names that were obtained from the confessions by members of the cell, is the person, the President of Egypt, Mohammad Morsi…

The Libyan Intelligence document goes on to name five other co-conspirators, all members of the Muslim Brotherhood.

This is the same Mohammed Morsi who Barack Hussein Obama was fawning over and sent hundreds of millions of dollars to in foreign aid. The same Mohammed Morsi that Obama is still supporting, sending his minions to lobby for his release by the Egyptian military. This despite the fact that the Egyptian military has evidence that Morsi conspired with the terrorist group Hamas to murder thousands of Egyptian citizens.

There is even a video of Ansar al-Sharia, the group that attacked the Benghazi consulate, admitting that it was Morsi who was behind the attack. This was broadcast on Libyan TV!

According to Arabic News Channel TV14 and reported on by Egypt Daily News, Obama sent an eight billion dollar secret bribe to the Muslim Brotherhood to guarantee that the Egyptian Sinai Peninsula be turned over to the terrorist group Hamas. Hamas, a Muslim Brotherhood sister group, works directly with Ansar al-Sharia in the Sinai Peninsula. Channel TV14 goes on to say that the agreement was signed by Mohammed Morsi and the Muslim Brotherhood’s second in command, Khairat Al-Shater, now under house arrest in Egypt, who says he has documents that will put Obama in prison!

But it gets worse: the eight billion dollars that Obama sent to the Muslim Brotherhood was shared with Ansar al-Sharia, the group that attacked our consulate and CIA Annex in Benghazi on September 11, 2012.

Posted in Benghazi Cover up

Comments Off on Obama Bankrolled Attack On The Benghazi Consulate