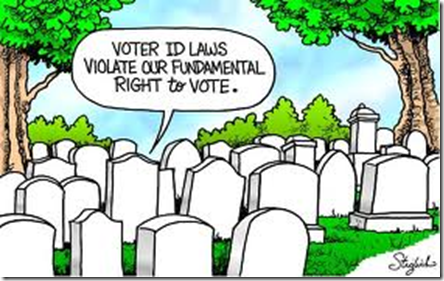 U.S. Attorney General Eric Holder is currently blocking implementation of voter ID laws in South Carolina and Texas, claiming such measures are “unnecessary,” discriminatory and would make it harder for minorities to vote.

But if you’re planning to visit Holder’s office in Washington, D.C., you better bring a photo ID. The Department of Justice has two armed guards stationed outside its headquarters to check IDs of anyone who wants to enter — employees and visitors.

Holder’s politically motivated crusade against voter ID laws has the support of liberal advocacy organizations ranging from the Center for American Progress and Media Matters to the Lawyers’ Committee for Civil Rights Under Law and the Advancement Project.

Each of these organizations has criticized photo identification for voting, yet they require it to enter their Washington, D.C., offices as well. There’s even a sign in the building of the Lawyers’ Committee for Civil Rights Under Law: “ALL VISITORS MUST SHOW ID.”

Holder is able to block laws in South Carolina on Texas because they are subject to Section 5 of the Voting Rights Act, a civil rights-era law that gives the Department of Justice authority over voting changes. It remains unclear if those states will be able to enforce their laws for this November’s election.

“The Obama-Holder Department of Justice has launched an all-out war on voter ID and other measures,” former Ohio Secretary of State Ken Blackwell said upon launching a new initiative called Protect Your Vote. “Although Holder’s actions are purported to prevent African-Americans from being disenfranchised, in reality they serve as a crass political attempt to ensure his boss gets re-elected this year.”

Liberals have long trotted out false arguments about voter ID laws, claiming they suppress the vote among those individuals who do not have photo identification. But a 2008 U.S. Supreme Court case upholding Indiana’s voter ID law revealed there was no such hardship. Opponents of the law were unable to produce a single plaintiff who could plausibly claim inability to get a photo ID. In addition, states with longstanding voter ID laws, such as Georgia and Indiana, have actually experienced an increase in turnout of minority voters.