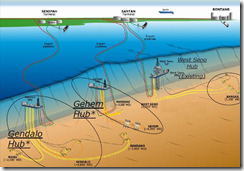 GAIL (India) Ltd is in talks with US energy major Chevron to acquire stakes in its deepwater natural gas blocks in Indonesia.

“Preliminary discussions have been held with the US firm. Chevron officials and Indonesia upstream regulator BPMIGAS will soon be coming to the country to hold further talks,” company sources said.

“The details on the amount of stake are yet to be worked out. The talks are at an early stage.”

Chevron plans to sell its stakes in two deepwater projects — Gendalo-Gehem and Bangka — in Indonesia. It plans to reduce its shares in the blocks this year to 55.1 per cent and 54 per cent, respectively, from 80 per cent, the firm said in its filing with the US Securities and Exchange Commission.

It had reached an agreement with China’s state-owned oil and gas company Sinopec to sell an 18 per cent stake in Gendalo-Gehem for $680 million.

At present, Chevron holds an 80 per cent stake with Italy’s Eni and Indonesia’s Pertamina owning the rest. The Indonesian regulator is yet to approve the sale to Sinopec.

Chevron has also sold some stake in Bangka but not revealed details.

It said, “During 2010, the company reached an agreement to farm out a portion of its working interest in the production sharing contracts of the two projects.”

Sources said GAIL would immensely benefit by acquiring a stake in the project.

The overseas asset acquisition will help it to access LNG for India. The equity participation in such upstream assets will act as a natural hedge to GAIL, which will also get to learn from a global player such as Chevron.

Read more at The Telegraph India