A Cost Sharing Agreement (CSA) has been executed between Levant LNG Marketing, a subsidiary of Pangea LNG B.V., and Tamar Partners. This major milestone demonstrates the continuing progress toward the export of LNG from the Tamar and Dalit fields in the Eastern Mediterranean, 60 miles offshore from Israel.

The Tamar Partnership will participate in the cost of developing the project front end engineering and design (FEED) for a permanently moored offshore floating natural gas liquefaction vessel with onboard storage. Pangea LNG and Tamar Partners anticipate launching FEED by end of 2012 and making a final investment decision by the second half of 2013.

The floating liquefaction (FLNG) midstream solution is being developed by Pangea LNG, an LNG development and investment company owned by Daewoo Shipbuilding and Marine Engineering (DSME), Next Decade International and D&H Solutions AS. Pangea LNG is a floating LNG liquefaction and storage project developer now working on projects around the globe that will connect gas suppliers to the world’s most important LNG demand markets.

Gerhard Ludvigsen, a founding member of the Pangea LNG board of directors, said “the Tamar project embraces the entire value chain and balances the risk positions for the owners of hydrocarbons, the off takers and the midstream technology provider.

“The Pangea business model offers the opportunity for all stakeholders to take part in the value enhancement from gas production through the FLNG/midstream solution to the final off take of LNG. Pangea LNG opens the potential for national oil companies and owners of small to medium size gas reserves to monetize stranded gas and take part in the value creation in the entire value chain.”

Pangea LNG continues to work on off-take agreements for LNG production from the Tamar project. Pangea LNG has already executed several letters of intent with potential off takers and is in the final stage of negotiations for the long term sales and purchase agreement.

The Tamar framework agreement represents an important step in the development of what will be the first floating LNG liquefaction project in the Mediterranean basin. The Tamar and Dalit fields are located in the Levantine basin in Israeli waters.

O.K. Shin, Team leader of DSME Corporate Strategy Team, noted that the vessel-mounted liquefaction system being designed will take advantage of the efficiencies of the DSME shipyard construction environment and the best practices the company has developed during many years of LNG and process vessel construction.

Pangea LNG brings together a team that generated the innovations that are at the foundation of the floating LNG sector. DSME, the majority owner of Pangea, is one of the world’s leading shipbuilders and a contractor for major energy companies providing them with offshore platforms, drilling rigs and floating production units. The company builds special purpose vessels and specializes in LNG carriers. It constructed nine of the 11 floating LNG regasification vessels now in service.

Delek Group gas subsidiaries announced that the Pre-FEED stage of Tamar and Dalit floating liquefied natural gas project (FLNG), off the coast of Israel, has now been successfully completed.

Therefore, the Tamar partners decided to begin the second phase-front-end engineering design (FEED). LNG production is expected to be up to 3 MMTPA. In accordance to that, Daewoo Shipbuilding & Marine Engineering Co. Ltd. (DSME) signed an agreement with Levant LNG Marketing and Pangea LNG BV for the completion of the FEED stage.

DSME will carry out the costs of FEED and Tamar partners will contribute a total amount of $15 million (100%). The agreement has been set for two years, or until the date of the final investment decision of the FLNG project, whichever is earlier.

Comments Off on Tamar Partners Dive into FLNG FEED (Israel) 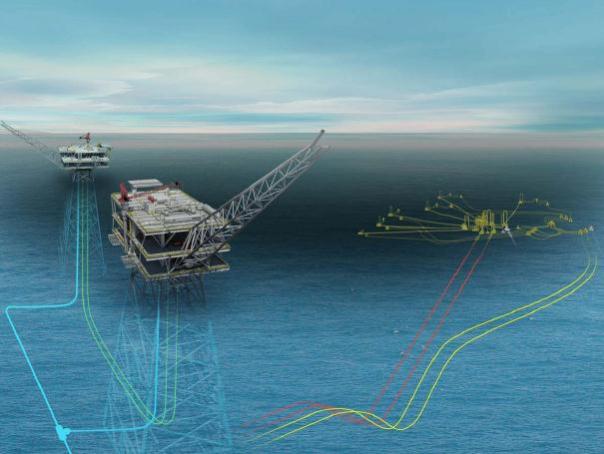 Tamar production platform has left the Keiwit Shipyards in Corpus Christi, Texas, USA, and is now on the way to its location offshore Israel, according to Globes, the Israeli financial newspaper.

It took 18 months for the 280 m platform to be completed, and the project has been described as “the largest infrastructure project in Israeli history.”

Noble Energy, operator of the Tamar field, did not immediately respond to an e-mail seeking comment.

The Tamar platform will be located in approximately 800 feet of water and will be able to process 1.2 billion standard cubic feet of gas per day. The Tamar field is estimated to contain 8.4 trillion cubic feet of gas and will be produced through several subsea wells connected to the platform by 150 km long flow lines. The single-lift topsides facility has four deck levels and weighs nearly 10,000 tons.

Globes further reports that the platform is expected to reach its destination during the fourth quarter this year. First production is scheduled for March 2013.

Israel’s  Delek Group has been informed by the operator, Noble Energy Mediterranean Ltd., that on June 12, 2012, development of Pinnacles #1 was completed and gas began to flow from it.

Pinnacles offshore well was recently linked by a subsea pipeline to the nearby Mari B production platform. Helix ESG’s reeled pipelay vessel, Express, which in April arrived at the port city of Haifa, Israel, completed the SURF (Subsea Umbilicals, Risers and Flowlines) work.

According to the Israel-based financial newspaper The Globes, Pinnacles well will produce 150 million cubic feet of gas per day.

Development of the Noa field is geared to allow for additional supplies of natural gas to the Israeli market, until the start of natural gas supplies from the Tamar project in early 2013.

Another off-shore oil and gas find buries even deeper the old joke that Moses took the wrong turn. Stepping into the Red Sea a good sign?

An Israel energy company announced Sunday it has discovered an off-shore energy field that may even surpass previous finds in terms of the possibilities of developing commercial grade oil.

Israel Opportunity Energy Resources LP announced that its Pelagic licenses indicate 6.7 trillion cubic feet (TCF) of gas and 1.4 billion barrels of oil. By comparison,  the previously announced Tamar and Leviathan off-shore fields contain an estimated 9 and 17 TCF of natural gas. The amount of commercial oil, if any, has not been finalized, but estimates of possible oil in the Leviathan field have been downsized to 600 million barrels.

Discoveries of oil and gas have made outdated the old joke that Moses took the wrong turn from Egypt, leading Israel to sand and leaving oil for the Arabs.

After being chased by Pharaoh to the edge of the “Sea of Reeds,” which often if not correctly is called the Red Sea, Moses asked Heaven to save them, and He replied to step into the sea, which then was split by winds, allowing the Jews to cross and then burying the army of Pharaoh when it followed.

Stepping into the sea now can be seen in retrospect as a sign of the treasures buried under the sea.

“The quantity of gas discovered in the licenses, and the high probabilities, make it the third largest offshore discovery to date,” according to Israel Opportunity chairman Ronny Halman, quoted by Globes.

He added, ”This quantity guarantees Israel’s energy future for decades, and makes it possible to export Israeli gas, and boost the state’s revenues without worrying about gas reserves for domestic consumption.”

The five Pelagic licenses cover half a million of acres of sea approximately west of Haifa. One of the licenses is estimated to have a 27 percent chance of success.

“We are preparing for the first well,” Israel Opportunity CEO Eyal Shuker said. “For the logistics, we’ve rented port storage and operations space, we’ve begun ordering drilling equipment, including drill heads and casings, and we’ve secured most of the agreements with Israeli and foreign services and equipment providers for the well. The operator, AGR, has already brought a skilled team to Israel to manage the operation.

The new discoveries make it more certain of a virtual revolution in the Israeli economy, with anticipation that Israel will be energy self-sufficient in three years and soon after will be able to export gas and possibly even oil.

The Tamar and Leviathan energy fields are being developed, and the infrastructure work has added thousands of skilled jobs to the labor market. Exporting energy probably will strengthen the shekel and help make it one of the strongest currencies in the world. 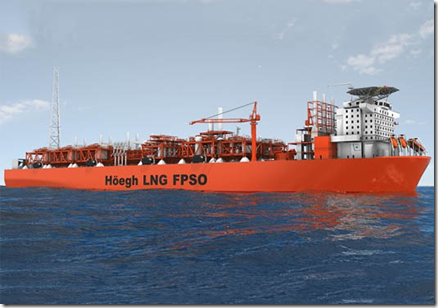 This agreement follows the recent announcement of the agreement between DSME consortium, DSME and its Norwegian joint venture D&H Solutions AS and Tamar field owners, Noble Energy, Delek and Isramco to exploit part of the Tamar field by use of an LNG FPSO.

The agreement states that Höegh LNG with selected partners shall be the owner and operator of the LNG FPSO and that DSME shall be the EPCIC contractor, subject to further engineering work and a final investment decision.

President and CEO, Sveinung Støhle, says: “We are excited about initiating the engineering work for an LNG FPSO to monetize the gas reserves in the Tamar field in Israel based on Höegh LNG’s already developed design. This is a result of Höegh LNG’s continuous effort over the past five years to promote technical and economical sound floating solutions for LNG production. We are pleased to work with DSME and the Tamar field owners in jointly developing one of the first LNG FPSOs to come to market. DSME has been our partner for several years and we are confident that together with the other Tamar partners we will design, construct and operate an excellent solution for bringing the Tamar gas to the market.”

Tamar gas field is located some 80 km west of Haifa in waters 5,500 feet (1,700 m) deep. The gross resource estimate of Tamar has been increased to 9 Tcf from 8.4 Tcf as a result of appraisal work, Noble Energy said recently in a press release.

Comments Off on Hoegh LNG, DSME to Work on LNG FPSO for Israel’s Tamar Field

“We’re organizing the matter, and quickly. The Tamar field gas pipeline will be connected during 2013. We’re also preparing a back-up for this pipeline, in other words, the ability to use coal, diesel, and heavy industrial oil. We’re also working on building a dual-fuel plant, which can operate on natural gas and coal, and are acting to receive gas via a floating terminal.”

Commenting on the latest attack on the gas pipeline in Egypt, which was closed as a result, Landau said, “Our system is ready to handle events of this kind and provide a response. Let’s wait and see how things will develop. Both we and they have a paramount importance in preserving the peace treaty and economic agreements.”

Comments Off on Israel to Speed Up Tamar Pipeline Construction