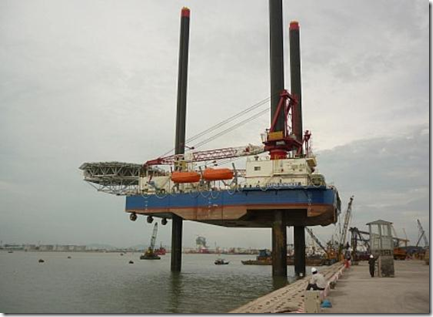 Singapore’s Ezion Holdings Limited  has sealed a charter contract with a value of up to USD 118 million over a 3 year period to provide a service rig to be used by a European based multinational oil company to support its oil and gas activities in offshore Myanmar.

The Service Rig is expected to be deployed and working in the field of Yadana before the end of 2012 after its refurbishment and upgrading. Ezion said that the project would be funded through internal resources as well as bank borrowings.  The charter will not have a material impact on the Group’s earnings per share or net tangible assets per share for the financial year ending 31 st December 2012.

Ezion owns one of the largest and most sophisticated class of Multi Purpose Self Propelled Jack up Rigs (“Liftboats”) in the world and one of the first to promote the usage of Liftboats in Asia & Middle East. Ezion’s Liftboats are used mainly for well servicing, commissioning, maintenance and decommissioning of offshore platforms. 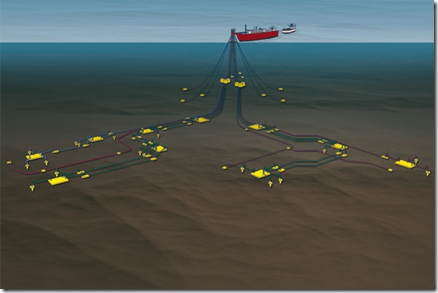 Under the agreement Aker Solutions will provide slickline and coiled tubing equipment and services, which are conducted with the objective of maximising production of oil and gas. Aker Solutions has delivered well services to Tullow’s Jubilee field since 2008. 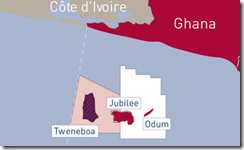 “Tullow is the largest independent oil and gas exploration and production company operating offshore West Africa. We are pleased to be able to support their ambitious growth plans through providing our technologies and services to increase oil recovery ratios,” says Wolfgang Puennel, head of well intervention services in Aker Solutions.

“Ghana is an up-and-coming oil nation. This new and extended contract with Tullow provides us with a solid long term outlook for our operations there. We will utilise this to set up a more permanent presence in Ghana, which will also drive the need for a larger local workforce. This will put us in a better position to secure further oil service work in the country,” adds Puennel. 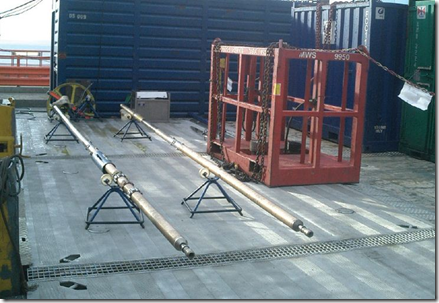 Murphy Oil Malaysia recently completed a highly successful, rigless intervention campaign using Welltec services. Not only did the operation allow immediate production from a “lost” well, but it also saved the time and cost of a rig based sidetrack. The end result is expected to add 20 MMscf/d into the production portfolio.

In the first well, the drift run hung up at 945 ft MD when trying to perforate the well. Based on previous experience, the cause was suspected to be part of a cement wiper plug. This was pushed down to a nipple profile at 4,314 ft MD, leaving it still 1,690 ft above the perforation depth. After only minutes of milling, the Well Miller made it through the plug, which allowed the Well Tractor® to push it down to 6,398 ft MD, approximately 380 ft below the target perforation interval. Thereafter the well was perforated and put on production.

In the second well, a poor cement job had made the primary target zone inaccessible and left an obstruction inside the tubing. With pressing rig commitments there was insufficient time to fix the problem, leaving the well temporarily abandoned and a candidate for future sidetracking. Based on the success of the first well, the Well Tractor and Well Miller were used to push the obstruction from 400 ft to 2,132 ft MD , meeting the objective to prepare the well for sidetracking.

However, it was decided to attempt to push the obstruction as far as possible. Using the Well Tractor and Well Miller the well was cleared well beyond the sidetrack target depth to an eventual Hold Up Depth of 8,743 ft MD. Getting this far down the production string allowed access to two of the three reservoirs in this well, which could now be completed for production rather than scheduled for a sidetrack workover. 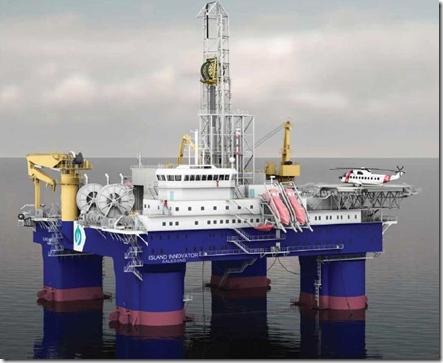 Grenland Group, a full-service engineering, procurement and construction company based in Norway, has been awarded a contract for two PetroFlame® burner booms for the semisubmersible drilling and intervention rig, Island Innovator.

Island Innovator is owned by Marine Accurate Well ASA (Maracc), and the rig is currently under completion at COSCO Shipyard in Qidong, China. Main shareholder of Maracc is the Island Offshore group.

“We are proud to be awarded this contract by Island Offshore, one of the leading providers of well intervention services. This contract proves once again our competitiveness in the global market”, says Erik Taule, EVP Solutions at Grenland Group.

“This taylor-made PetroFlame® system combines our extensive experience of design, fabrication and construction. The design will be done at our office in Sandefjord, and fabrication will be subcontracted to Jutal, China, and closely followed up by our Shanghai office“, says Jan-Erik Totland, Product Manager at Grenland Group.

The PetroFlame® burner booms supplied by Grenland Group is designed for permanent installation on vessels or mobile offshore drilling units, and for the purpose of well testing. The PetroFlame® keeps the gas flare and burner head in safe distance from the vessel structures to achieve low level of heat radiation. 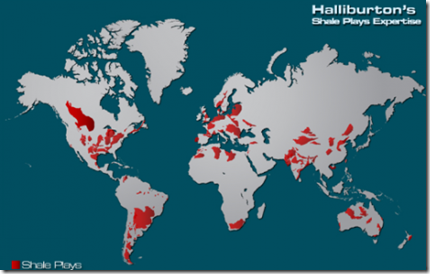 The world’s largest oil-field services company is preparing for the boom in shale gas and oil development to spread beyond North America in the coming years, likely heating up in 2013.

Poland is already moving quickly to exploit gas reserves using horizontal drilling and hydraulic fracturing technologies. Many more promising basins have been located in Latin America and the Eastern Hemisphere, and drillers and well completion companies will probably see a major growth in international business related to shale extraction from 2013 and into 2014, a Halliburton executive told industry peers at an analyst event.

“Things are moving quickly, probably a little more quickly than we originally anticipated,” said Tim Probert, president of Halliburton’s strategy and corporate development division. The evolving situation beyond the United States and Canada, he said, promises a “robust outlook for the oil service industry.”

In the past year, Halliburton has discovered “a fairly sizable population” of shale basins and other unconventional oil and gas reserves that could be tapped using new and improving technologies, Probert said at a two-day event sponsored by the investment firm Jefferies.

Halliburton technology teams have been dispatched to do assessments in the Middle East, Latin America, Asia and Europe. The results they are reporting are raising eyebrows with regard to the potential for international business growth.

A total of 150 separate basins have been analyzed so far, Probert noted, and 60 have been assessed in detail. And although market and regulatory conditions will make many of those basins infeasible or impractical for oil and gas development, many more will eventually to opened up to exploration and exploitation, Halliburton predicts.

A more international operating environment will also probably force the industry to adapt new technologies and techniques for hydraulic fracturing, or “fracking,” that cause less concern among environmentalists and regulators, Probert added.

Halliburton is working on techniques that employ “clean” fracking fluids that use chemicals commonly found in the food-processing industry, he said. The company is investing millions of dollars in research in the hopes of creating the “frack of the future,” more environmentally friendly and less controversial fracking techniques, Probert said.

Halliburton also sees growing interest in the Middle East and other major historic oil patches to employ other enhanced extraction technologies aside from fracturing, to arrest future declining output from mature oil fields.

The company maintains that Organization of Petroleum Exporting Countries] producers, in particular, are not investing enough in existing fields. That trend, the company said, will reverse as pressure builds in those nations to keep government revenues from oil and gas production flowing.

The company also sees business in the offshore sector perking up in the coming years. Many new rigs are seen coming online beyond the Gulf of Mexico. East Africa is an especially promising market, Probert said, adding that his company is moving to build the infrastructure in that region that will be necessary to support a robust offshore oil and gas industry there.

“We are more enthusiastic today than we were two quarters ago,” Probert said. 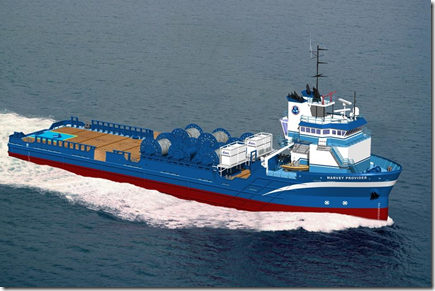 “We are pleased to collaborate with Harvey Gulf to provide sustainable power solutions for their Gulf of Mexico operations,” said John Shock, Caterpillar Marine Power Systems sales manager. “Caterpillar was able to create a factory-supported, design-to-order package for Harvey Gulf that will afford the vessel increased operational flexibility in highly-regulated waters.”

The 3516C EPA Tier 3 generator set is a vee-16 cylinder with a 170 millimeter bore by 215 millimeter stroke and 78.08 liter displacement. The 3516C diesel electric propulsion generator sets offer the latest in EUI fuel system capabilities and state-of-the-art ADEMTM A4 Electronic Control Units (ECU) to create efficiencies between the control units, unit injectors, instrumentation and displays to perfectly balance power supply, fuel consumption and exhaust emissions at any given load.

The SV – 310 is a 302-foot MPSV vessel currently being constructed by Eastern shipyard for Harvey Gulf. Based in New Orleans, Louisiana, Harvey Gulf specializes in providing the deepwater Gulf of Mexico with environmentally-friendly offshore supply vessels. “We are pleased to partner with Caterpillar to be able to deliver the first United States-flagged deepwater construction vessel to the market,” Shane Guidry, Harvey Gulf International CEO commented. “The Harvey Deep Sea is capable of deploying 100 tons to water depths of 3,000 meters at a deck hook-height of 129 feet while simultaneously delivering 18,000 barrels of liquid mud, 10,500 cubic feet of cement, 1,700 barrels of methanol and 4,000 tons of deck cargo.” 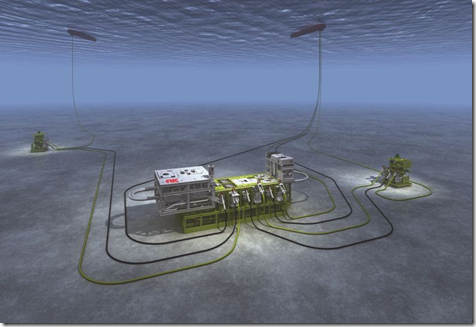 FMC Technologies, Inc.  announced that it has signed a global alliance agreement with Anadarko Petroleum Corporation to provide subsea systems and life-of-field services for their worldwide subsea development projects.

In 1999, FMC supplied equipment for Anadarko’s first subsea project, North Garnet, in the Gulf of Mexico. Since then, the companies have collaborated on other projects including Independence Hub, the largest natural gas processing facility in the Gulf, and FMC has also supplied Anadarko with the industry’s first subsea wellhead qualified at a pressure rating of 20,000 psi.

“An alliance has been in place with Anadarko and its legacy companies since 1992 to support their Gulf of Mexico exploration and production projects,” said John Gremp, FMC Technologies’ Chairman, President and Chief Executive Officer. “Today’s announcement will allow FMC to broaden its support of Anadarko’s expanding exploration and production activities worldwide, including recent discoveries offshore the East and West coasts of Africa. Anadarko has an extensive deepwater program, and we are pleased to strengthen our relationship through this global alliance.”

FMC Technologies, Inc. is a leading global provider of technology solutions for the energy industry. Named by FORTUNE® Magazine as the World’s Most Admired Oil and Gas Equipment, Service Company in 2010, the Company has approximately 13,500 employees and operates 27 production facilities in 16 countries. FMC Technologies designs, manufactures and services technologically sophisticated systems and products such as subsea production and processing systems, surface wellhead systems, high pressure fluid control equipment, measurement solutions, and marine loading systems for the oil and gas industry. 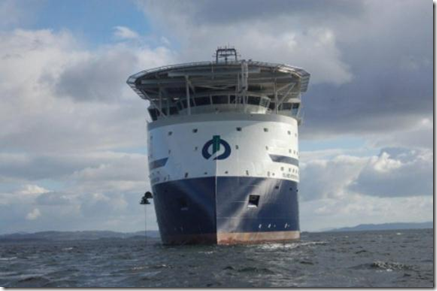 Island Offshore has secured contract for its  subsea construction vessel Island Intervention. The vessel has begun the charter with Subsea 7 , the international provider of Subsea, Umbilical, Riser and Flowline  (SURF) services.

The operations are expected to take up to three weeks.

Island Intervention will be used as a command and control vessel and the whole operation involves in total 6-7 vessels.

“Island Offshore is pleased to be awarded this work by Subsea 7.” said the company on its website.