(Reuters) – Global oil supply outages are running at more than a million barrels a day, a Reuters survey has found, helping provide justification for the United States and Britain should they release strategic reserves in a bid to cut oil prices.

Civil unrest, adverse weather and technical glitches disrupted 1.2 million barrels per day (bpd) of global oil output in March on the 90 million bpd world market, according to a Reuters calculation from information provided by companies, government agencies and traders.

While disruptions of supply to the world oil market are commonplace, it is rare and perhaps unprecedented that such a large volume of oil is offline at any one time outside a single major disruption.

The aggregate reduction now is close to the volume of exports lost from Libya during civil war last year which at its worst knocked out 1.4 million barrels a day.

The International Energy Agency opened emergency reserves for only the third time last year to cover that loss but is resisting doing so again, arguing that it does not see a significant supply disruption.

The United States and Britain were reported by Reuters last week to be planning a bilateral release. South Korea would support a release, a government source said, but has not yet had an approach to do so. Others including Germany and France are opposed to an increase. “I think it’s pretty clear from the administration’s references to Sudan’s and other outages that if it decides to use the SPR (Strategic Petroleum Reserve) it will justify it partly on various recent disruptions,” said a former White House energy advisor, Bob McNally, who heads consultancy Rapidan Group.

Leading oil exporter Saudi Arabia has raised its own output to 9.85 million bpd in February, according to a Reuters survey, but is the only producer with significant spare output capacity to counter serious shortfalls.

Some of the current outages could ease in April, when output from Canadian and Australian oilfields is expected to resume after temporary shutdowns. In addition, Libyan output is fast rising toward pre-war levels.

Supplies from politically volatile producers Syria, Yemen and South Sudan may remain disrupted for a prolonged period. Sanctions against Iran could also offset any increase in output from other countries, tightening oil supply later this year.

“Australian productions are just about to come back after the cyclone,” said Seth Kleinman, analyst at Citigroup. “But you always want to bet on more supply outages than less. The situation in Sudan and South Sudan has shown no signs of improvement and the key to watch is oil loadings from Iran,” he said.

With Apache’s Stag likely to follow soon, about 65,700 bpd of Australian oil and about 320,000 bpd of Canadian oil, which has been unexpectedly closed off, are likely to come back to the market in April.

Still, a larger chunk of about 710,000 bpd in South Sudan, Yemen and Syria remains shut and shows no sign of an early return.

Disruptions may grow as a European Union ban on Iranian crude takes effect on July 1 and as pressure increases on Asian importers to reduce oil purchases from Iran. EU countries late last year were importing about 700,000 bpd of Iranian crude.

The IEA estimates Iran’s oil exports could be curtailed by between 800,000 and 1 million bpd from the middle of this year.

Citi’s Kleinman said Nigeria should be kept on the watch list. Although there have not been any significant outages in March, Africa’s largest producer suffers from sabotage attacks to oil production facilities, which have forced oil majors such as Royal Dutch Shell (RDSa.L) to suspend exports.

In the North Sea, the UK’s largest oilfield Buzzard has been experiencing sporadic technical glitches, which have reduced its output since last year. 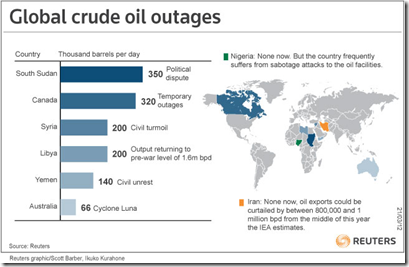 Following is the breakdown of global oil production outages by region and country as of mid-March.

Syria – Export outage totals about 150,000 bpd. Syrian oil output has been severely reduced since last year and its exports suspended since September due to international sanctions.

Before the conflict, Syria exported about 150,000 bpd of mostly heavy Souedie crude.

Yemen – About 140,000 bpd of Yemen’s oil output has been reduced by months of political unrest over the last year. Output came to a near standstill in mid-February during a week-long worker strike at its largest oilfield.

Libya – Libya’s crude output as of late March was about 1.4 million bpd, or 200,000 bpd below the full production level of 1.6 million bpd before the 2011 civil war. An official with Libya’s National Oil Corporation said its exports are likely to increase to 1.4 million bpd in April, including some deliveries from tanks following some loading delays from March due to bad weather.

South Sudan – South Sudan shut its crude oil output of roughly 350,000 bpd – about three quarters of the combined total from Sudan and South Sudan – in January after Sudan took some of the crude to make up for what Khartoum said were unpaid transit fees.

Canada – Oil output has been cut by about 320,000 bpd as production of Suncor Energy Inc’s (SU.TO) and Syncrude Canada has been cut by 220,000 bpd and 100,000 bpd, respectively, for unplanned outages. Both will be back online in April.

Comments Off on Analysis: Global oil outages at 1.2 million bpd in March: survey