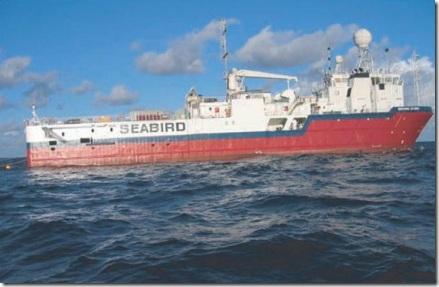 Spectrum, in partnership with the National Petroleum Corporation of Namibia (NAMCOR), has commenced a new project in the Luderitz basin following the successful completion of an extended 2D Multi-Client seismic survey covering the deep water Orange Basin, offshore Namibia.

The Orange Basin program acquisition has been completed with additional lines now extending the program to over 8,000 km of long offset data. The vessel has now commenced a new regional program in the Luderitz Basin consisting of 4,400 km plus a potential infill of 1,200 km.

Seabird Exploration is providing the acquisition services through their Northern Explorer vessel which performed exceptionally well during January and February. Nearly 4,000 km of high quality data was acquired in February and the extended survey was completed ahead of schedule. Further prefunding has enabled Spectrum to add additional lines to the Orange Basin program and to commence the new Luderitz Basin survey.

There is considerable attention in the area at this time. The new survey is located immediately between the recently announced BP farm-in to the Serica 2513 A&B blocks and the potential in the Petrobras/BP/Chariot 2714A block. Very little seismic data is available over these blocks  and Spectrum’s survey will provide both Operators and potential Partners with a good quality regional dataset to evaluate this almost unexplored area.

Over 35,000 km of high-quality 2D multi-client data is now available through Spectrum from offshore Namibia in ten individual surveys. Each survey has been designed to target key plays within the offshore area. The data vintages range from the 1989 regional survey, through to detailed block specific surveys including the 2003 survey acquired around the Ondjou prospect in the northern Walvis Basin. There is also a comprehensive suite of surveys around the Kudu field, as well as covering the Orange and Luderitz Basins.

Polarcus Limited announces that the Company has received a Letter of Intent from an undisclosed client for a 3D seismic acquisition project offshore NW Europe.

The program will commence imminently and is expected to run for approximately 75 days.