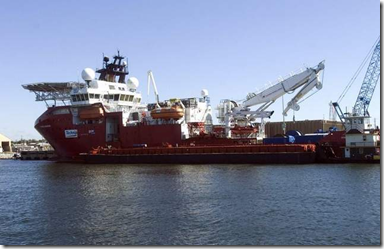 The Skandi Achiever makes a stop at the Port of Pensacola on Wednesday for a crew change.

The Port of Pensacola continues to be busy with the arrival of a specialized diving vessel Wednesday morning.

The Skandi Achiever, a dive-support boat, is stopping in Pensacola for an equipment and crew change, said Buddy McCormick, director of business development and public relations for Offshore Inland.

The saturation dive system allows 18 divers to trade off staying in four, three-man decompression chambers. The divers can descend and perform work on equipment like offshore rigs then recover from deep-water diving, McCormick said.

The 350-foot vessel arrived at the port at about 6:30 a.m. Wednesday after a trip from Europe, he said.

The vessel, owned by French oil and gas infrastructure giant Technip, will be at the port for four to five days before going on its next three- to four-week job in the Gulf of Mexico. It will return to Pensacola to pick up equipment after the job.

Technip recently purchased Global Industries and now owns the Global 1200 pipe-laying vessel that recently was berthed at the port and is scheduled to return Oct. 27.

Technip will have almost 30 vessels working in the Gulf of Mexico, McCormick said.

Offshore Inland leases a warehouse at the port and has the right of first refusal for vessels docking at berths one and two.

McCormick said he’s pleased with the recent influx of vessels at the port and hopes to create jobs by bringing even more into the port.

The massive catamaran-style lift with double golden arches that arrived at the port Oct. 7 is scheduled to depart today, port officials said.

The Versabar 10,000 stopped in Pensacola for routine maintenance because of high winds and seas in the Gulf. It was scheduled to depart Oct. 11, but made one trip into the Gulf and returned for a second stop Saturday.