The current boom in drilling for ‘unconventional’ gas has helped raise US production to levels not seen since the early 1970′s. This has been an incredible boon to consumers and has kept spot prices contained below $5 per million BTU for the past year, recently dropping below $3/mmbtu. Unfortunately, this price is below the cost of production for many of these new wells. When the flood of investment currently pouring into natural gas drilling operations dries up, the inevitable bust will be as scary as the boom was exciting.

Rolls-Royce, the global power systems company, has been awarded a £15 million contract by STX OSV to supply an extensive deck equipment package for an advanced anchor handling vessel to be operated by Iceman AS.

The package, which is designed to improve operational safety, will include a new anchor handling frame (AHF) and a hydraulic anchor winch, which is capable of pulling 500 tonnes. It will also feature anchor handling cranes and systems to ensure controlled management of wires and chains when pulling heavy loads.

As the exploration and production for oil and gas moves towards deeper waters, mooring lines become heavier, more difficult and more hazardous to handle. The new AHF is designed to reduce the handling forces and wire tension during anchor deployment and retrieval operations, while also minimizing the human exposure to hazardous operating conditions. The AHF is mounted at the stern of the vessel to ease the deployment and recovery of anchors. It makes it simpler to deck the anchor with correct orientation and without repeated efforts or assistance from other vessels.

Comments Off on UK: Rolls-Royce Equipment for Iceman AHTS 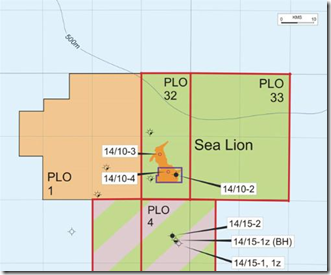 Rockhopper Exploration plc , the North Falkland Basin oil and gas exploration company, announces that the 14/10-9 well (the “Well”) was spudded at 10.45 hrs BST on 25 October 2011.

The Well, situated on Licence PL032, which is 100% owned and operated by Rockhopper, is the eighth well to be drilled on the Sea Lion feature. It is located approximately 5.9 km to the south west of the 14/10-2 discovery well and is designed to investigate reservoir presence and hydrocarbon charge within the Sea Lion Main Complex towards the southern edge of the Company’s acreage and is also an exploration well on the Eastern side of the Casper prospect.

Drilling operations are expected to take approximately 33 days and a further announcement will be made once drilling is completed.