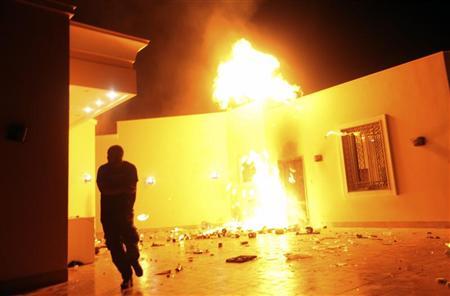 (Reuters) – Officials at the White House and State Department were advised two hours after attackers assaulted the U.S. diplomatic mission in Benghazi, Libya, on September 11 that an Islamic militant group had claimed credit for the attack, official emails show.

The emails, obtained by Reuters from government sources not connected with U.S. spy agencies or the State Department and who requested anonymity, specifically mention that the Libyan group called Ansar al-Sharia had asserted responsibility for the attacks.

The brief emails also show how U.S. diplomats described the attack, even as it was still under way, to Washington.

U.S. Ambassador Christopher Stevens and three other Americans were killed in the Benghazi assault, which President Barack Obama and other U.S. officials ultimately acknowledged was a “terrorist” attack carried out by militants with suspected links to al Qaeda affiliates or sympathizers.

Administration spokesmen, including White House spokesman Jay Carney, citing an unclassified assessment prepared by the CIA, maintained for days that the attacks likely were a spontaneous protest against an anti-Muslim film.

While officials did mention the possible involvement of “extremists,” they did not lay blame on any specific militant groups or possible links to al Qaeda or its affiliates until intelligence officials publicly alleged that on September 28.

There were indications that extremists with possible al Qaeda connections were involved, but also evidence that the attacks could have erupted spontaneously, they said, adding that government experts wanted to be cautious about pointing fingers prematurely.

Spokesmen for the White House and State Department had no immediate response to requests for comments on the emails.

The records obtained by Reuters consist of three emails dispatched by the State Department’s Operations Center to multiple government offices, including addresses at the White House, Pentagon, intelligence community and FBI, on the afternoon of September 11.

The first email, timed at 4:05 p.m. Washington time – or 10:05 p.m. Benghazi time, 20-30 minutes after the attack on the U.S. diplomatic mission allegedly began – carried the subject line “U.S. Diplomatic Mission in Benghazi Under Attack” and the notation “SBU”, meaning “Sensitive But Unclassified.”

The text said the State Department’s regional security office had reported that the diplomatic mission in Benghazi was “under attack. Embassy in Tripoli reports approximately 20 armed people fired shots; explosions have been heard as well.”

The message continued: “Ambassador Stevens, who is currently in Benghazi, and four … personnel are in the compound safe haven. The 17th of February militia is providing security support.”

The message reported: “Embassy Tripoli reports the group claimed responsibility on Facebook and Twitter and has called for an attack on Embassy Tripoli.”

While some information identifying recipients of this message was redacted from copies of the messages obtained by Reuters, a government source said that one of the addresses to which the message was sent was the White House Situation Room, the president’s secure command post.

Other addressees included intelligence and military units as well as one used by the FBI command center, the source said.

It was not known what other messages were received by agencies in Washington from Libya that day about who might have been behind the attacks.

Intelligence experts caution that initial reports from the scene of any attack or disaster are often inaccurate.

By the morning of September 12, the day after the Benghazi attack, Reuters reported that there were indications that members of both Ansar al-Sharia, a militia based in the Benghazi area, and al Qaeda in the Islamic Maghreb, the North African affiliate of al Qaeda’s faltering central command, may have been involved in organizing the attacks.

One U.S. intelligence official said that during the first classified briefing about Benghazi given to members of Congress, officials “carefully laid out the full range of sparsely available information, relying on the best analysis available at the time.”

The official added, however, that the initial analysis of the attack that was presented to legislators was mixed.

“Briefers said extremists were involved in attacks that appeared spontaneous, there may have been a variety of motivating factors, and possible links to groups such as (al Qaeda in the Islamic Maghreb and Ansar al-Sharia) were being looked at closely,” the official said.

The United States was born when rebellious colonists declared their independence from an imperial ruler who had vastly overstepped his bounds. “The history of the present King of Great Britain is a history of repeated injuries and usurpations, all having in direct object the establishment of an absolute Tyranny over these States,” they wrote in their Declaration of Independence.

Today’s presidency lacks the regal air of George III. But imperialism is back, in a big way.

The President himself has admitted he doesn’t have the authority to do this. “The idea of doing things on my own is very tempting, I promise you, not just on immigration reform. But that’s not how our system works,” he told Hispanic activists last year. “That’s not how our democracy functions.”

We can now see before us a persistent pattern of disregard for the powers of the legislative branch in favor of administrative decision-making without—and often in spite of—congressional action.  This violates the spirit—and potentially the letter—of the Constitution’s separation of the legislative and executive powers of Congress and the President.

On Tuesday, the President invoked executive privilege to avoid handing over some 1,300 documents in an ongoing Congressional investigation.  The Supreme Court has held that executive privilege cannot be invoked to shield wrongdoing.  Is that what’s happening in this case? “Congress needs to get to the bottom of that question to prevent an illegal invocation of executive privilege and further abuses of power. That will require an index of the withheld documents and an explanation of why each of them is covered by executive privilege—and more,” Heritage legal scholar Todd Gaziano writes.

Earlier this year the President crossed the threshold of constitutionality when he gave “recess appointments” to four officials who were subject to Senate confirmation, even though the Senate wasn’t in recess. Gaziano wrote at the time that such appointments “would render the Senate’s advice and consent role to normal appointments almost meaningless. It is a grave constitutional wrong.”

There is no telling where such disregard may go next, but the trend is clear, and it leads further and further away from the constitutional rule of law.

The President has unique and powerful responsibilities in our constitutional system as chief executive officer, head of state, and commander in chief. Those powers do not include the authority to make laws or to decide which laws to enforce and which to ignore. The President – like judges or Members of Congress – takes an oath to uphold the Constitution in carrying out the responsibilities of his office.

Indeed, the President takes a unique oath, pledging he “shall faithfully execute the Office of President of the United States” and “preserve, protect and defend the Constitution of the United States.” We don’t need a new Declaration of Independence, but we do need a President who will defend and vigorously exert his or her legitimate powers, recognizing that those powers are not arbitrary or unlimited.

Dr. Matthew Spalding is the Vice President for American Studies and Director of the B. Kenneth Simon Center for Principles and Politics at The Heritage Foundation. He is also the author of We Still Hold These Truths.

Comments Off on USA: Imperial Presidency