Gulf Coast working to fill a fuel void in Northeast 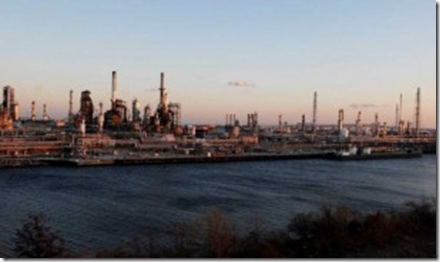 Sunoco‘s Philadelphia refinery is on the banks of the Schuylkill River. The company plans to pull out of the refining business altogether, which could help put the Northeast region in a precarious position. Photo: MIKE MERGEN / HC

Northeastern states are slated to lose half of their regional capacity for fuel production by midyear as financial woes push refineries there to idle, a trend likely to increase the region’s dependency on Gulf Coast supply.

A Houston-to-New York pipeline is making major expansions to accommodate growing demand to transport gasoline and other fuels up north from the Gulf Coast to fill the potential supply void.

The Gulf already supplies about half of the Northeast’s demand for petroleum products, said Mindi Farber-Deanda, head of the liquid fuels market team for the U.S. Energy Information Administration.

But the shutdown of production at two major Pennsylvania refineries last year and potential closure of a third could put the region in a precarious position and stress supplies of gasoline, jet fuel and heating oil, the agency concluded in a new report.

“It’s marginal, but it matters,” Farber-Deanda said of the drop in the Northeast’s local fuel production. “Before, you could get a certain percentage of supply from local refineries. Now you get it from Europe and the Gulf.”

The report noted that Northeastern states could experience “spot shortages with price hikes” for gasoline and other fuels as refineries discontinue operations.

Sunoco announced last month that it will idle operation of its 335,000 barrel-per-day refinery in Marcus Hook, Pa., part of the company’s plan to pull out of the refining business altogether. If Sunoco doesn’t find a buyer for its 178,000-barrel-per-day Philadelphia refinery by July, it will go off line, too, the company has said.

ConocoPhillips announced a similar move in September, taking its 185,000-barrel-per-day Trainer, Pa., refinery off line to prepare it for sale.

A combination of the sagging economy and improved fuel efficiency in vehicles and equipment has caused demand for some fuels to plateau. Meanwhile, competition from larger and more efficient refineries on the Gulf Coast and imports from Europe put pressure on local fuel producers, said Bill Day, a spokesman for San Antonio-based refiner Valero.

“They found it very difficult to compete,” he said. “If there was demand for product there, those refineries wouldn’t close down.”

Valero pulled out of the Northeast in 2010, when it sold its Delaware City, Del., and Paulsboro, N.J., refineries.

The struggling European economy has left refiners on the continent with plenty of gasoline to ship overseas.

A bigger concern for the Northeast is heating oil.

Demand for ultra-low-sulfur heating oil is expected to rise next fall, when regulations taking effect in New York will require use of the cleaner fuel in boilers that warm buildings. A limited number of refineries are equipped to produce it.

“Heating oil concerns are probably the greatest,” said Terry Higgins, executive director of refining for consulting company Hart Energy. “A cold snap, with a strong surge on heating oil needs, could be a strain on the system.”

The Gulf Coast is replete with refineries that are expanding or have room to increase production, he said. Motiva Enterprises, a joint venture of Shell and Saudi Aramco, is nearing the end of a massive expansion of its Port Arthur refinery to increase production of ultra-low sulfur fuel and other petroleum products.

In 2010, Gulf Coast area refiners produced a net 3.4 million barrels per day of ultralow-sulfur distillate fuel oil, a category that includes the clean heating oil, according to Energy Information Administration data. That’s up from just 23,000 barrels per day in 2005.

The 5,500-mile pipeline transports heating oil, as well as gasoline, diesel fuel and other petroleum products.

In total, the expansions will increase the system’s capacity by about 8 percent, Baker said.

“We have seen a rising demand throughout the year” for fuel transport between the Gulf Coast and the Northeast, Baker said. “These are big capital investments. It’s a significant increase.”