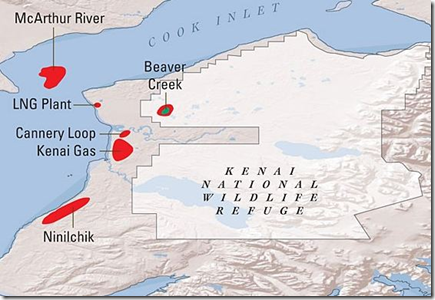 Marathon Oil Corporation announced that it has entered into a definitive agreement with Hilcorp Alaska LLC, under which Hilcorp will purchase substantially all of Marathon Oil’s Alaska assets.

The companies expect to close the transaction, subject to completion of the necessary Government and regulatory approvals, by this fall.

With an effective date of Jan. 1, 2012, the sale includes 17 million barrels of oil equivalent of net proved reserves across 10 fields in the Cook Inlet, as well as natural gas storage, and interests in natural gas pipeline transmission systems.

In 2011 net production averaged approximately 93 million cubic feet of natural gas per day and 112 barrels of oil per day.

Additionally, Marathon Oil had approximately 12.5 billion cubic feet of natural gas in storage at the end of 2011.

Petsec Energy reports that a third well has been spud on the Marathon gas/condensate field, located in the shallow waters of the Atchafalaya Bay along the Louisiana Gulf Coast, USA. The well was spud on 4 March 2012 and will serve as a further development well for the field.

The 19,000 feet (5,900 metres) well is situated in approximately 8 feet (2.4 metres) water depth and is located less than 200 metres from the #1 well location. Drilling operations are expected to take 107 days to reach total depth, log and case. Petsec’s estimated net cost to drill, log and case is US$1.5 million. New pipeline options for the Marathon field are currently being evaluated which would allow for increased production from the existing two wells, this third well, and further development wells.

Genesis Energy, L.P.  announced yesterday that it has entered into definitive agreements to acquire from Marathon Oil Company interests in several Gulf of Mexico crude oil pipeline systems, including its 28% interest in Poseidon Oil Pipeline Company, L.L.C., its 29% interest in Odyssey Pipeline L.L.C., and its 23% interest in the Eugene Island Pipeline System.

Marathon Oil Company is a wholly-owned subsidiary of Marathon Oil Corporation . The Poseidon and Odyssey interests are subject to the expiration or waiver of rights of first refusal, and Genesis is not obligated to consummate any transaction unless it is ultimately successful in acquiring the interest in Poseidon. Additionally, Marathon Oil has the right to dispose of certain of the other oil pipeline assets prior to any final closing of a transaction with Genesis.

The purchase consideration for all of the assets, subject to usual and customary adjustments for debt, working capital, etc., is $205.76 million, which includes an estimated $29 million valuation of crude oil line fill at current market prices owned by the interests to be acquired. Genesis intends to finance the transaction with the more than $400 million of funds available under its revolving credit facility and expects the transaction to close before year end.

The Poseidon system is comprised of a 367-mile network of crude oil pipelines, varying in diameter from 16 to 24 inches, with capacity to deliver approximately 400,000 barrels per day of crude oil from developments in the central and western offshore Gulf of Mexico to other pipelines and terminals onshore and offshore Louisiana. Affiliates of Enterprise Products Partners L.P. and Shell Oil Company each own a 36% interest in Poseidon. An affiliate of Enterprise will continue in its role as operator of Poseidon.

The Odyssey system is comprised of a 120-mile network of crude oil pipelines, varying in diameter from 12 to 20 inches, with capacity to deliver up to 300,000 barrels per day of crude oil from developments in the eastern Gulf of Mexico to other pipelines and terminals onshore Louisiana. An affiliate of Shell owns the remaining 71% interest in Odyssey. An affiliate of Shell will continue to serve as the operator.

The Eugene Island Pipeline System is comprised of a 183-mile network of crude oil pipelines, the main pipeline of which is 20 inches in diameter, with capacity to deliver approximately 200,000 barrels per day of crude oil from developments in the central Gulf of Mexico to other pipelines and terminals onshore Louisiana. Other owners in Eugene Island include affiliates of Exxon-Mobil, Chevron-Texaco, ConocoPhillips and Shell Oil Company. An affiliate of Shell will continue to serve as the operator.

“This acquisition represents another exciting growth opportunity for Genesis,” said Grant Sims, Genesis’ Chief Executive Officer. “These pipelines, especially Poseidon, would complement our existing infrastructure in the Gulf of Mexico, and enhance our ability to provide attractive capacity and market optionality to producers for their existing and future developments as well as our refining customers onshore Texas and Louisiana. The Gulf of Mexico is an important and growing resource basin in the U.S. that we are convinced will be safely, responsibly and efficiently developed for many years to come.”