Island Performer getting ready to perform in Gulf of Mexico

A naming ceremony was held for the subsea vessel ‘Island Performer’ in Norway on Friday, June 27, 2014.

The Island Performer, owned by Island Offshore, is getting ready its her work for FTO in the Gulf of Mexico.

The vessel is equipped with a large intervention tower over the main moon pool, a 250-tonne AHC Offshore Crane and two deep-sea work ROVs.

With a length overall of 130m, and width of 25m, the vessel can accommodate 130 people.

The Island Performer is particularly developed to suit the scope in the FTO contract in which Riser-less Light Well Intervention and Inspection, Maintenance, Repair are main tasks. 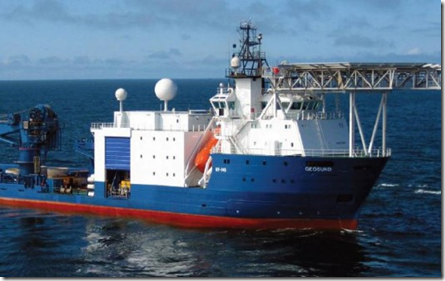 DOF Subsea Norway AS has been awarded a Frame Agreement for Offshore Survey Services by Statoil.

Statoil has also awarded DOF Subsea Norway the first Call-Off for light construction work on the Norwegian Continental Shelf. The minimum 6 month + 6 x 1 month option project will commence 1st March 2012 and will be executed from the survey/IMR vessel Geosund with onshore project support from our office in Bergen. 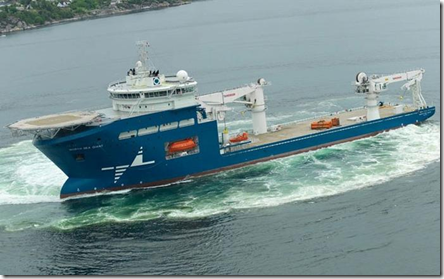 Technip Norge AS have declared an option to the existing contract for the 2012-season on the OCV “NORTH SEA GIANT” and will now retain the vessel until end 2013.

The vessel will be employed on a number of large subsea construction projects in the North Sea during 2012, including flex-lay duties on Goliat-project in Barents Sea.

M/V North Sea Giant has been designed for long term construction works in the open sea, supporting a crew of 120 people . The ship has a heliport, exercise hall, movie theater and sauna. There are two cranes on deck, one with a load capacity of 400 tons and the other 250 tons.

The vessel  is one of the biggest OCV in the world at this moment. It is 156 meters long, 30 meters beam and over 22 MW of installed power.

Simultaneously Neptune Subsea AS, the ship owning company of the vessels, welcomes Reef Subsea as a 25% shareholder. Both vessels have been recently delivered to Neptune Offshore and should be transferred to Reef Subsea by mid-January 2012.

The sister ships are newly-built IMR and Subsea Construction vessels. Designed with the Ulstein X-Bow, they have a faster transit speed in head seas, and enjoy reduced fuel  consumption. The design also provides several advantages in the foreship and on the working decks making the vessels more environmentally and work friendly (read more in foot note). Designed for worldwide and deepwater services, they are equipped with 150t SWL crane with active heave compensation, an enclosed ROV hangar with integrated LARS for the deployment of Work Class ROVs on both sides of the vessel, a large moonpool and up to 750m² of working deck.

The  150t crane is able to work in over 2000m water depth and, with the Reef Subsea’s WROVs, the vessels will be able to operate in water depths up to 3000m. Both vessels are expected to work in the North Sea and in Europe to deliver projects sanctioned by clients from both the Oil & Gas and the Renewable Energy industries.

The vessels will be renamed Reef Despina and Reef Larissa

Mark Preece, Reef Subsea Chief Executive Officer, said: “I am extremely pleased we can increase Reef Subsea’s fleet with two newly-built environmentally friendly vessels. Our fleet is now comprised of four vessels, three of which are new.  These new vessels provide added value in our service to our Clients and excellent offshore working conditions for the Project teams. Our new share ownership in Neptune Subsea represents an element of control for the years to come as well as a potential ability to increase our participation.”

Bjørn Endresen, Neptune Offshore Chief Executive Officer, commented: “On behalf of Neptune Offshore and Neptune Subsea, I am very proud to see the two Vessels being well received in the market place, and we believe the Vessels will serve Reef Subsea, its clients and the market in general in a prosperous way.”

DeepOcean AS has been awarded a 1 year option by Statoil for the vessel Edda Flora under the existing frame agreement for Inspection, Maintenance and Repair (IMR) the company holds with Statoil.

The vessel will continue to work on various IMR activities and the vessel is equipped with ROVs (Remotely Operated Vehicles), module handling tower and will be supported by DeepOcean project personnel both on- and offshore.

–“This is the first optional period for Edda Flora under the long term frame agreement we hold with Statoil for IMR services and I’m pleased to learn that Statoil would like to continue the existing relationship and cooperation with DeepOcean. This is truly a recognition of the high quality services delivered by DeepOcean and our employees, and we are dedicated to uphold our excellent performance going forward”, says Mads Bårdsen, President in DeepOcean in a comment.