The U.S. Energy Information Administration (EIA) said in a report that between 2009 and 2011, Pennsylvania’s natural gas production more than quadrupled due to expanded horizontal drilling combined with hydraulic fracturing.

This drilling activity, which is concentrated in shale formations that cover a broad swath of the state, mirrors trends seen in the Barnett shale formation in Texas.

Historically, natural gas exploration and development activity in Pennsylvania was relatively steady, with operators drilling a few thousand conventional (vertical) wells annually. Prior to 2009, these wells produced about 400 to 500 million cubic feet per day of natural gas. With the shift to and increase in horizontal wells, however, Pennsylvania’s natural gas production more than quadrupled since 2009, averaging nearly 3.5 billion cubic feet per day in 2011. Natural gas wells accounted for virtually all (99%) of the horizontal wells started over this period.

Drilling programs in Pennsylvania’s shale formations, like those in other, more established plays such as the Barnett and Eagle Ford in Texas, are migrating to more liquids-rich areas due to the price premium of crude oil and natural gas liquids. The effect of low natural gas prices is apparent in Pennsylvania’s 2012 well count for the first third of the year. From January through April, drilling began on 618 new natural gas wells; over 700 new natural gas wells were started over the same period in 2011. In contrast, 263 new oil and “combination” (oil and natural gas) wells were started in Pennsylvania from January through April 2012, well above the 164 new wells that began drilling during the corresponding period in 2011. 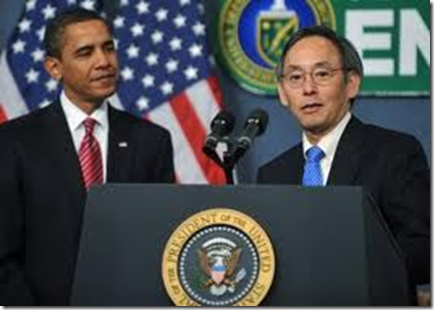 …[It] was public research dollars, over the course of thirty years, that helped develop the technologies to extract all this natural gas out of shale rock – reminding us that Government support is critical in helping businesses get new energy ideas off the ground.

Chu said the Department of Energy’s experiments between 1978 and 1992 helped develop the widespread practice of horizontal drilling and fracturing that made capturing natural gas from rock formations such as shale cost-effective enough that private industry could take over. (Source.)

This is some pretty serious revisionist history, and it’s all directed at justifying continued “investment” in green clean energy research*.

Nicolas Loris is an energy and environmental policy analyst at The Heritage Foundation. Mr. Loris gets it right:

Well before the government invested in natural gas technologies, it was the private sector that established and developed hydraulic fracturing (or “fracking”), a process by which producers inject a fluid, composed of 99 percent water, and sand into wells to free oil and gas trapped in rock formations.

Its roots go as far back as the 1860s. In the 1940s, Stanolind Oil and Gas Corp. began studying and testing the method, with a patent issued in 1949 and a license granted to Halliburton to frack on two commercial wells.

Government involvement came years later. The Department of Energy partly funded data accumulation, microseismic mapping, the first horizontal well, and tax credits to extract unconventional gas. But who was in the driver’s seat? George Mitchell, who invested millions of his own money in research and development for fracking and horizontal drilling.

The geologist for Mitchell’s company, Jim Henry, first identified Barnett shale as a possibility for more energy. Mitchell spent between $7 million and $8 million of his own money trying to extract shale gas successfully and eventually made it economically viable. He is behind the shale gas revolution, not the government.

Truth be known, DoE has never taken the lead in oil and gas research. The majors (“Big Oil”) historically had their own research labs and were loathe to share their proprietary research with the government or each other. The major service companies like Halliburton and Schlumberger also wanted to develop their own patents and protect their commerciality.

Much of the research that mattered was conducted by the Gas Research Institute, an industry consortium that spent private funds. The revenue base was a small fee on gas transported by the major interstate pipelines. DoE cooperated with GRI, and may have provided funding at some level. For two or three years in the early ’90s, I served as one of 2-3 dozen industry advisors, providing GRI with industry feedback for their research planning. There were always a couple of DoE staffers present at our meetings.

Some of the GRI-backed research was private, some at research universities, and some at national labs like Sandia and Lawrence Livermore. But it was privately directed and privately funded.

I remember from those days Mitchell Energy’s keen interest in unlocking the gas in the Barnett Shale. Mitchell has most of Wise County, TX under lease, and the Barnett was widespread. I thought at the time that Mitchell was particularly good at milking the Feds when it came to funding its research. Mitchell’s strategy was the exception, not the rule.

Money wasn’t given directly, but like on the horizontal well, Mitchell paid the cost of a vertical well, and government paid the rest. If the horizontal well cost $1.5 million, but the vertical was 800k, the DOE contributed the difference between the two. I don’t know exact numbers. But there was a contribution of money toward that well. …

Mitchell got the slickwater frack from UPR [Union Pacific Resources]. They developed it.

If there was a government program that was significant, it was the Section 29 production tax credit, which I blogged about back in 2010. Steward has this to say about the importance of the credit, but also the advantageous gas sales contract that Mitchell enjoyed:

Mitchell was selling his gas dollar and a quarter over the spot price. We would never have been able to do what we did in the Barnett without that. Mitchell had the money to invest in R&D. And he had the vision. He had people in the company saying this is bulls**t, this is wasting our money, you’re using our retirement money on something that’s no good. They’d say, “Dan, if Barnett is the best thing we have, then we don’t have s**t.” …

We had a gas contract with a natural gas pipeline that gave us a higher price. We had a basket of prices and gases and with the different categories we could keep our gas price. So you could say that those pricing scenarios, and the tight gas tax credit, created the possibility for shale gas.

Yes, the government played a role by providing the tax credit. DoE research, and support of private research, was significant but not central to the story.

In any case, there is no analogy in oil and gas to the kind of support that is being lavished upon alternative fuels and “green energy”. Where is the gas analog of a Solyndra, or a Fisker? They don’t exist. Government support for gas did not come in the form of $535 million loan guarantees. That kind of silly money is begging to be wasted.

But as the good Dr. Chu reminds it, there are more failures to come.

Energy Secretary Steven Chu again warned Friday that more recipients of Energy Department green technology loan guarantees will likely collapse even as he touted the strength of the program overall.

This change in terminology presumably reflects the Administration’s begrudging embrace of the promise of natural gas.