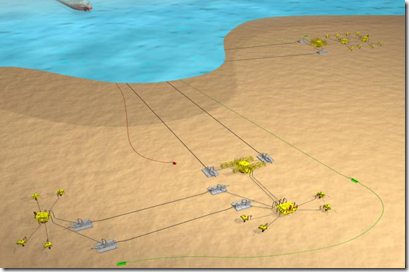 Vector Technology Groups Subsea Division has been awarded a contract by Technip Houston for a Subsea Pig Launcher rated at 15,000 PSI. Vector Subsea Engineering have been working closely with Petrobras and Total to complete the design for Cascade Chinook Field in the Gulf of Mexico.

“This is just another example of Engineering strength” explains Chris Lee Vector’s Subsea Division Managing Director. “Our Engineering group has designed the launcher for a specific application for our client after a series of meetings to understand their issues” Delivery is planned for Q1 2012.

The Chinook area consists of two gas and condensate fields, Chinook and Cascade, located in the Gulf of Mexico, tied-back to the Chinook FPSO. Currently, both fields are being developed, with production expected to commence in the latter part of 2010.
Chinook
The Chinook field – in Walker Ridge Blocks 469 and 452 – is located in the outer continental shelf of the Gulf of Mexico. The field is situated about 160 miles (257 kilometers) south of the Louisiana coast in 8,200 feet of water (2,500 meters.) It is 66.67% owned and operated by Petrobras America Inc. and 33.33% owned by Total E&P USA, Inc.
The Chinook discovery defined a new hydrocarbon trend in the Gulf of Mexico’s ultra-deepwater. The hydrocarbon bearing sandstones are similar to the Wilcox Group (Eocene-Paleocene) level, which is a prolific producing sediment onshore Gulf of Mexico.
In 2000, BHP drilled on the Chinook well in Walker Ridge Block 452, but encountered a sand-poor Miocene section, which they plugged and considered a dry hole. Experiences from surrounding wells concluded the drill still had to go 500 feet (152 meters) deeper in Chinook to the untested Wilcox section. In June 2003, they went back and drilled again. After drilling to 27,652 feet (8,428 meters) and referring to the Wilcox experience, BHP hit a discovery. Chinook is expected to turn into a world-class petroleum system in the deepwater GOM.
Field Development
The discovery well was drilled in January 2003 using the BHP Billiton operated drillship C.R. Luigs. Field development plans for both of the fields include the use of the first FPSO in the GOM in the deepest waters to date, roughly 8,250 feet (2,515 meters) of water.
Technip received two contracts worth US $300 million for the development of the Cascade and Chinook gas fields. The first contract entails the engineering, procurement, construction and installation of five freestanding hybrid riser systems for both fields. The second contract covers the installation of Cascade’s infield flowlines and gas export pipeline, as well as the welding of steel pipelines, the design and fabrication of 10 PLET and two in-line tees, and the installation of the pipelines and associated structures.
Petrobras America Inc. selected BW Offshore Limited for the conversion, installation and operation of the FPSO at the Chinook field. Field development will include an APL disconnectable Submerged Turret Production Buoy (STP) including fluid swivel and the appurtenant mooring system, enabling the FPSO to disconnect from its moorings and seek sheltered waters in a hurricane situation with minimum disruption to operations. BW Offshore is expected to install the FPSO in 2010, and production start-up is slated for the first quarter of 2010.
Measuring 241 meters long, 42 meters wide and 20.4 meters tall, the FPSO has a storage capacity of 500,000 barrels of oil, with a maximum production rate of 80,000 bop/d and 460,000 MMcf/d (13,026 MMcm/d). The vessel will be installed in a water depth of 2,500 meters.
Oil will be transported from the fields in shuttle vessels to terminals along the Gulf Coast from Texas to Mississippi, and gas will be exported through gas export pipelines. The development concept of Chinook was to be flexible in order to enable multiple developments for future phases.
Estimates of production capacity are 80,000 barrels of oil.
Cascade
Located on Walker Ridge Blocks 205, 206, 249 and 250, the Cascade gas and condensate field was discovered on Jan. 31, 2002. Situated in a water depth of 8,200 feet (2,499 meters), the field is wholly owned and operated by Petrobras.
Drilled to a total depth of 27,929 feet (8,513 meters) by the drillship C.R. Luigs, the discovery well encountered more than 450 feet (137 meters) of net pay in the lower Tertiary trend. In 2005, two additional delineation wells were drilled and encountered 200 feet (61 meters) and 500 feet (152 meters) of net pay, respectively.
Cascade will have several subsea wells tied-back to the FPSO, which is located on the Chinook field. Production is expected to commence in the June or July 2010.

Comments Off on The Greater Chinook Area