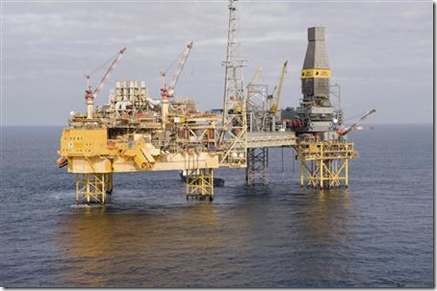 (Reuters) – France’s Total sent fire-fighting ships to wait near the scene of a gas leak from its North Sea Elgin platform, which has created fears a large gas cloud could explode.

The company said the gas was originating thousands of meters below the sea bed, which engineers said might mean that a relief well – one possible option to stop the leak – could take months to drill.

“The leak is from a (gas) well that was plugged one year ago and from a rock formation in about 4,000 meters depth,” a company spokeswoman in Aberdeen said on Thursday.

A flare needed to relieve pressure in the platform by purging excess gas has continued to burn less than 100 meters from the leak, and engineers said changes in wind and weather could lead to an explosion.

“The wind is pushing the gas cloud in the opposite direction (from the platform). At this time, the circumstances are rather favorable,” Jacques-Emmanuel Saulnier, head of communication at Total said in an interview published on Total’s website.

“A gas cloud is always a fire hazard,” he added.

Total kept two fire-fighting ships in a state of readiness outside a two-mile exclusion zone, which was set up to protect marine traffic, a Total spokeswoman said.

The company has also brought in a robot vessel, not yet deployed, to scan the sea bed for signs of spillage, she said.

Total has not yet found a way to stop the gas leak. A team of international engineers assembled by the embattled French oil company are drawing up plans to tackle the leak and prevent the flare from coming into contact with the gas cloud, the spokeswoman said.

The platform is currently off limits to the engineers, however, given the toxic and explosive plumes pumping out of the wellhead.

The leak started on Sunday and forced the evacuation of all 238 workers from the platform, which sits in waters less than 100 metres deep and 240 km (150 miles) off the east coast of Scotland.

Total warned on Tuesday it could take six months to halt the flow of gas. The company previously stated it hoped the leak would die down from natural causes as reservoir pressure drops.

“What we know is that the leak is not coming from a well dug by Total but from a naturally occurring pocket of gas located just above one of our wells,” said Total’s Saulnier.

The depth of the non-producing reservoir that is feeding gas to the Elgin platform via compromised layers of piping suggests, however, there is more gas present rather than less, piling pressure on Total to drill a relief well, an engineer with knowledge of the matter said.

Relief drilling would require boring through 4 kilometers of rock with painstaking mathematical precision, because it must intercept the gas pocket at exactly the right point, requiring constant alterations in course, the engineer said.

The leak, one of the biggest in the North Sea for decades, could well inspire tougher safety regulation in due course, according to experts. Britain’s health and safety watchdog said it was considering launching an investigation into the incident, while union officials said the frequency of offshore safety lapses had become intolerable.

Memories are still raw in the North Sea industry of the Piper Alpha platform fire 24 years ago, which killed 167 people in the world’s deadliest offshore oil disaster and led to a major regulatory overhaul.

Total as well as UK authorities have described the expected environmental impact from the plume of gas and a spreading sheen of light oil on the water as “minimal”, although environmental experts said much of the gas “cocktail” would be either flammable or poisonous at close quarters.

Total’s shares have lost about 9 percent in the wake of the incident. They were trading at 37.63 euros at 1305 GMT.

Analysts said the French oil major could face costs of up to $10 billion if its North Sea gas leak leads to an explosion and nearly $3 billion if it takes months to fix.

However, Jefferies securities and investment bank said in a research note that data that had emerged on the spill, which “has further convinced us that the spill consequences should be less than the most pessimistic market estimates and hence that the US$9.7 billion sell-off in the stock since Monday is overdone”. 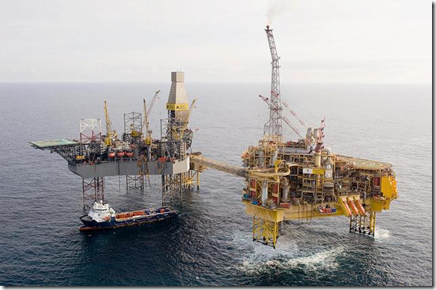 The gas leak that occurred at the wellhead platform on the Total-operated Elgin field in the UK North Sea, remains ongoing, the operator reports.

The gas has been flowing since Sunday, March 25th, when Total evacuated all the personnel from the Elgin platform. The precise cause of the gas leak, that has been flowing approximately 240 km east of Aberdeen, is yet to be identified.

According to The Telegraph, experts have warned that the gas cloud which can be seen is very flammable and they described the situation as a disaster waiting to happen because the flare on the Elgin platform is still ongoing.

Total explains that the flare is an integral part of the platform’s safety system, and it is used to safely evacuate all the remaining gas from the platform.  The company says that the flare does not pose a threat, because the winds are taking the gas cloud away from the open flame.

“The wind is forecast to remain in its current direction for the coming days.  You can be assured that this is being reviewed on a constant basis and should this change any impact is being assessed.  In parallel we are investigating solutions to extinguish the flare if it does not burn out by itself.”

Elgin and Franklin are two high pressure/high temperature gas and condensate fields in the Central Graben Area of North Sea. Total E&P UK Limited owns 46.17% and is operator of both fields through its wholly-owned subsidiary EFOG and its average share of production was around 60,000 barrels of oil equivalent per day in 2011.

Elgin/Franklin facilities comprise two wellhead platforms, one on Elgin and one on Franklin and a Production/Utilities/Quarters (PUQ) platform. The PUQ is on the Elgin field and is linked to the Elgin wellhead platform by a 90-metre bridge. 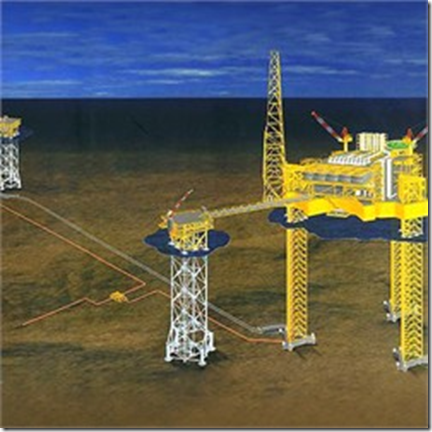 The gas leak at Total’s wellhead platform on the Elgin gas field in the North Sea is not as serious as BP’s Deepwater Horizon accident in 2010, said Fitch Ratings Wednesday.

The ratings agency added that even in the event of a shutdown of the whole Elgin field, it believes that Total is likely to retain its ‘AA’ credit rating as it has the cash resources to more than cover any associated costs.

“The Elgin leak is a surface gas leak rather than an underwater oil leak, making its potential for environmental damage far lower than in the Deepwater Horizon case,” said Fitch in a press statement Wednesday. “These sorts of accidents are often difficult to resolve and unpredictable; nonetheless, in our view the potential is low for this leak to escalate to a crisis on the scale of Deepwater Horizon. Total’s preliminary assessment suggests there has been no significant impact on the environment and the use of dispersants has not been considered.”

However, Fitch added that it had considered a “worse-than-base-case” scenario where Total may have to shut down the Elgin field to stop the gas leak. “This would imply the loss of a producing field that is worth, in net present value terms, EUR 5.7 billion [$7.6 billion] according to third-party valuations. Were the field to become permanently unusable it would cost Total EUR 2.6 billion [$3.5 billion] and the company might have to compensate its partners for the remaining EUR 3.1 billion [$4.1 billion],” Fitch said.

On Tuesday Dow Jones reported a source saying that the proximity of vessels owned by Transocean and Rowan to the Elgin platform may sway Total’s decision in hiring a firm to drill relief wells to cap the leak.

Currently, Transocean’s Sedco 714 (mid-water semisub) is drilling for Total in the North Sea, while a Rowan jack-up rig was used for drilling work at Elgin.

Total said Tuesday it is studying all options and could take time to make a decision, while dismissing reports that claimed the company had indicated it could take up to six months to drill a relief well.

“They are not details that have come from us at all,” a Total spokesperson told Rigzone Tuesday morning, explaining that the company did not yet have a timescale in place regarding the drilling of a relief well.

Meanwhile, Royal Dutch Shell reported Tuesday that it removed oil workers from two of its North Sea rigs due to the proximity to Total’s Elgin/Franklin platform.

In a statement, Shell said it had reduced personnel on its Shearwater platform and the nearby Nobel Hans Deul drilling rig. Drilling operations on the Noble Hans Deul (400′ ILC) rig, which is located offshore Scotland 138 miles east of Aberdeen, have been suspended and the wells “left in a safe state,” said Shell.

“While the move is purely precautionary and primarily driven by the prevailing weather conditions, and both facilities remain operational, it has been decided to reduce numbers to a more manageable level until the full situation surrounding the Elgin leak has been established,” said a Shell spokesperson.

Shell also reported Tuesday that it is using the downtime as an opportunity to conduct maintenance on one of its rigs.

“Further to the precautionary safety measures we took yesterday following Total’s gas leak at Elgin, we have no brought forward plans to carry out maintenance at Shearwater. This will take place from today, starting four days ahead of schedule. We are therefore shutting down production in a controlled manner,” said a Shell spokesperson.

Total reported Monday that it had evacuated the Elgin platform’s crew and reported that all 238 personnel had been accounted for.

A former engineer, Jon Mainwaring is an experienced journalist who has written about the technology, engineering and energy industries. Email Jon at jmainwaring@rigzone.com.

Comments Off on Fitch: Total Gas Leak ‘Not Another Deepwater Horizon’

Enbridge is investigating the report of a small natural gas leak in the West Cameron Block 275, approximately 66 miles off the coast of Louisiana in the U.S. Gulf of Mexico.

A helicopter flyover was completed yesterday, and a three-foot diameter patch of bubbles has been spotted on the surface of the water in the vicinity of the Stingray natural gas pipeline. 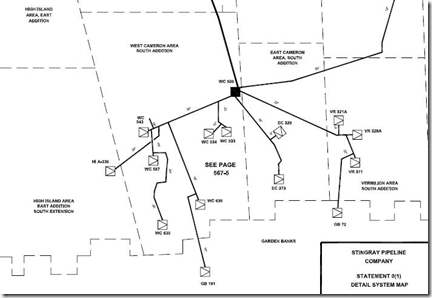 ”The Stingray Pipeline continues to operate under normal operating parameters at this time, in accordance with regulatory standards and guidelines, and we are in contact with regulatory authorities. A dive boat has been dispatched to the location, and we will commence an investigative dive as soon as weather conditions permit,” said Terrance L. McGill, senior vice president of natural gas operations and engineering for Enbridge. “If a leak is confirmed as a result of the diving activities, we will immediately begin repairs. We do not anticipate any potential business interruption to be material.”