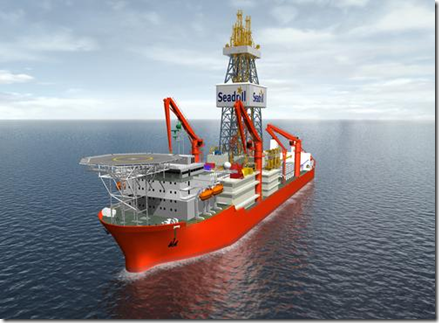 With strong oil prices persisting, major energy companies are increasingly reinvesting their earnings in exploration and development of offshore oil and gas basins. Visiongain calculates capital expenditure in the MODU market will total $48.1bn in 2012.

According to the International Energy Agency, global oil demand will rise from 88 million barrels today to around 99 million barrels in 25 years time. Over this period the cost of extracting oil will be higher and production from offshore resources will not be as expensive as it was relative to development of onshore hydrocarbons.

Although new technological improvements mean fewer people will be needed on offshore oil and gas drilling rigs, the construction industry behind MODUs and assembly of related technologies is providing employment for thousands of people. For example, the Brazilian marine construction industry has emerged on a vast scale to enable its offshore industry to provide MODUs and technologies for Petrobras to meet its vast oil production targets from its offshore resources.

The Mobile Offshore Drilling Units (MODU) Market 2012-2022 report includes 144 tables, charts and graphs that analyse quantify and forecast the MODU market in detail from 2012-2022 at the global level, four submarkets and for 7 regional markets. The analysis and forecasting ahs been reinforced by extensive consultation with industry experts. Two full transcripts of exclusive interviews are included from Friede & Goldman and Maxeler Technologies. The report also profiles 55 leading companies involved in the MODU market.

Comments Off on MODU Market Spending to Reach USD 48.1bn in 2012 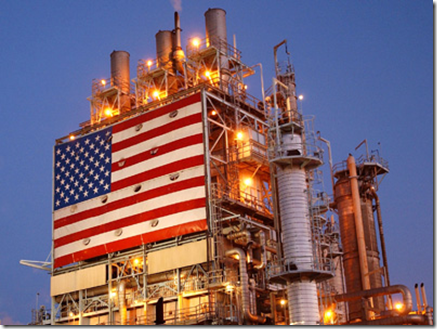 In fact, they think that oil production could almost double—in just the next 8 years!

A follow-up report from Citi’s equities team highlights the companies that are already in position to take advantage of this energy boom. While analysts argue that the effect of an energy boom would be transformative and extend far beyond the oil industry, these are the companies that will be directly and locally impacted by the technological breakthroughs in resource extraction. 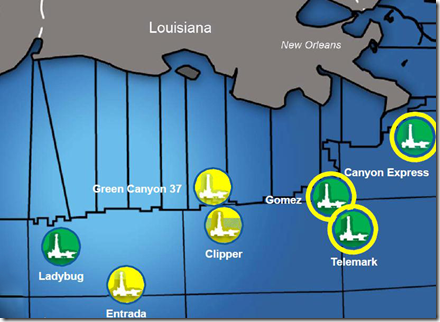 ATP operates the deepwater Telemark Hub in approximately 4,000 feet of water with a 100% working interest and holds a 100% ownership in ATP Titan LLC which owns the ATP Titan and associated pipelines and infrastructure.

Comments Off on USA: Oil Flows at Telemark 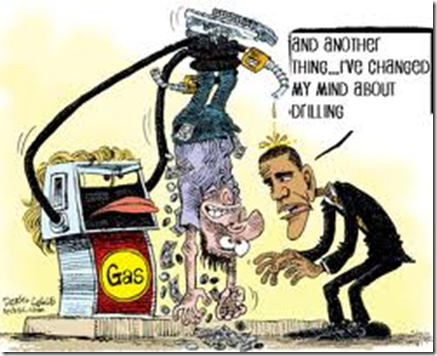 President Barack Obama has gotten an earful from Republicans and energy industry officials for claiming his administration has helped to spur a rise in oil and natural gas production.

Robert Rapier at the ConsumerEnergyReport.com broke down oil production under the presidential tenures of George Bush and Obama. Here is what he came up with:

For industry folks, it isn’t exactly what you imagine, but Rapier says the graph doesn’t paint the clearest picture of who is responsible for driving production of oil and natural gas. 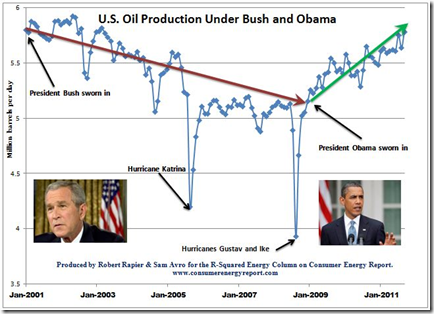 “The reason that oil production has risen under President Obama is due to events that happened years earlier. In this case, it wasn’t some grand initiative that President Bush passed, rather it was years of steadily increasing oil prices that caused oil companies to approve a number of new projects that had marginal economics at lower oil prices. But these projects take some years to build, and as in the case of the Alaska Pipeline, decisions that were made (four to six) years earlier benefited President Obama with increased domestic oil production.”

Your President has been telling you things that simply aren’t true. Things like “We can’t drill our way out of our energy problems.” Or “Oil and gas are the fuels of the past.” Or “The U.S. consumes 25% of the world’s oil, but controls only 2% of the world’s reserves.”

Well, that last one may be technically true, but it is used to convey a falsehood. In a post called The Big Energy Lie (Dec. ’09), I attempted to explain the deception. In this post, I’ll attempt to show you graphically in terms that the lay person should understand.
KEY CONCEPT #1: “Reserves” are not “Inventory” 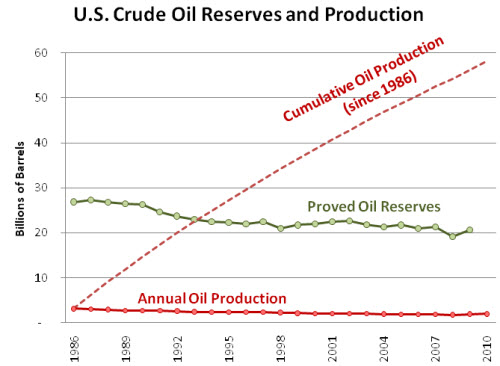 If this were true, we’d have run slap out of oil in 1995. The dashed line on the graph shows the cumulative amount of oil produced since 1986. Sure enough, by 1995 we had produced over 27 billion barrels, and we still had reserves in the ground of over 22 billion barrels.

Imagine if you managed a shoe store. On January 1, inventory shows you have 10,000 pairs of shoes on hand, and you sell 500 pairs per day. Would you forecast that you would be completely out of shoes in 20 days?

Only if you can’t replenish supply. (Or if you’re a really crappy manager.)

In oil and gas, reserves are replenished by drilling new wells. (Reserves can be added other ways, too, but the ultimate key is drilling.) By drilling, “resources” are upgraded to the much more restrictive and valuable category “reserves”. And the U.S. has plenty of resources to draw from. We should be encouraged by the fact that, even with a period of persistently low product prices and relatively low drilling activity from 1986 to 2004, the reserve base has only declined by a little over 20% in 25 years.

KEY CONCEPT #2: “Reserves” are only estimates.

Oil and gas reserves often cannot be estimated with a great deal of precision. Even if the recoverable quantity were known accurately, by definition reserves must be economic to produce. That means that changing economic conditions (especially changes in oil and gas prices) will effect the estimated reserve quantity. When prices are higher, wells can be produced that would otherwise be plugged.

The dark green bars show the rate of oil production over the 25 years. The gold bars show the year to year change in reserves. Production causes reserves to decrease, but new additions from drilling can offset production. Reserves can also be revised — up or down — due to geologic and engineering studies, or changes in economics as described above.

One more graph — the “Reserve Life Index”, or Reserves to Production Ratio. We saw that it is often misinterpreted to represent how many years of production remain. Our national R/P ratio has grown over the last 25 years, perhaps a reflection of better technology or higher prices. 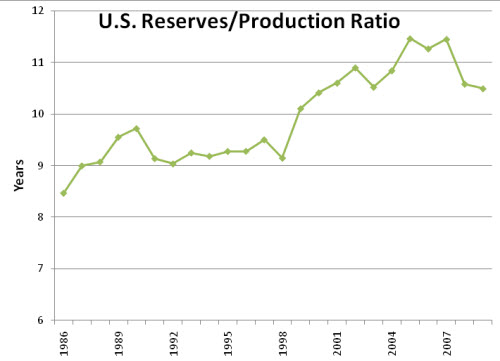 There you have it. Our relatively low reserve number is not an indication that “we’re running out of oil!”, it’s merely a wake-up call that we need to get busy and shore up our domestic supplies. The only thing we are running low on is the political will to do it.

Comments Off on The Big Energy Lie, Revisited 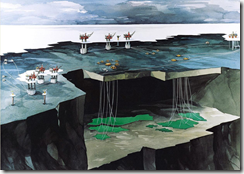 Subsea 7 S.A. announced today the award of a SURF contract valued at approximately $70 million from Statoil on the Tordis Area in the North Sea.

This contract is for the engineering, procurement and installation of two 10” 12 km oil production pipelines, together with a pull-in to Gullfaks C and tie-in at the Tordis PLIM. Engineering will commence immediately with offshore operations in 2011 and 2012.

Tordis oil field lies in block 34/7 in the Tampen area of the Norwegian North Sea, and came on stream in 1994.

These discoveries have all been developed with subsea installations. Water depth is roughly 200 metres.  Water injection is used to maintain pressure in the reservoirs.

The well stream from Tordis is routed through two pipelines to the Gullfaks C platform 10 kilometers away for processing, storage and export.

Subsea 7 S.A. is  a seabed-to-surface engineering, construction and services contractor to the offshore energy industry worldwide.

Now that oil is back up to $100-plus a barrel, Obama is spouting nice words but no plan of action. Not only do his words carry no action, they are distortions and outright lies about what he has done in the last two years and what he plans to do. He has increased our dependence on foreign oil, not decreased it.

First, he capriciously shut down drilling in the Gulf of Mexico, putting 80,000 people out of work and reducing oil production. Most of those rigs have taken long-term contracts in other countries and the rigs and jobs won’t come back for years. Ironically, by executive order he gave $2 billion to Brazil to drill in their deep water offshore. So, we can’t drill for American oil but we are paying money to the 5th largest economy in the world to drill in the same environment that he shut down in the U.S. This has to be one of the most corrupt give-aways in American history as one of the owner’s of the Brazilian company is George Soros, a major Obama supporter.

By contrast on state lands you could be drilling in 30 days. U.S. oil production is going up and Obama claims credit but he has done nothing to help. Production is up because oil companies are finding new oil fields, mainly in North Dakota on private lands.

Obama’s stimulus package gave billions of dollars of our money to subsidize high priced wind and solar projects. Wind and solar project energy do nothing to decrease our dependence on foreign oil as we only generate 1 percent of our electricity from oil. Obama also plans to continue to subsidize bio fuels, which take as much energy to make as they deliver and raising food costs in the process.

If we want to reduce our dependence on foreign oil we need to drill in America. Wake up America, Obama is making us more dependent on foreign oil — not less. He also wants to implement his Cap and Trade bill which will make your energy cost skyrocket, all for the sake of the global warming hoax.

Comments Off on Obama’s ‘energy policy’ riddled with inconsistencies