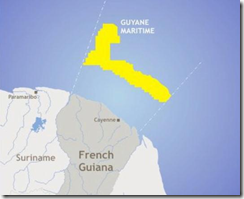 The objective of the Zaedyus well was to test whether the Jubilee-play, successfully established in West Africa, was mirrored on the other side of the Atlantic. This discovery therefore opens a new hydrocarbon basin within which several neighbouring prospects have been mapped. This result also reduces the exploration risk associated with Tullow’s prospect inventory offshore French Guiana, Suriname and Guyana. An appraisal programme and extensive follow-up exploration activities will now be considered.

The Zaedyus well is being drilled in the Guyane Maritime licence using the ENSCO 8503 deepwater semi submersible. The well was drilled in water depths of 2,048 metres and has been drilled to a depth of 5,711 metres. Drilling operations will now continue and the well will be deepened to over 6,000 metres to calibrate the deeper geology. The well will then likely be sidetracked to enable cores to be obtained over the reservoir sections.

“The discovery at Zaedyus has proved the extension of the Jubilee-play across the Atlantic and made an important new discovery in French Guiana. Tullow has built a commanding and unique acreage position in South America and this result marks the start of a significant and potentially transformational long-term exploration and appraisal campaign in the region.”

The Sikuliaq, a cold-climate, oceanographic research ship, will replace the 40-plus-year-old and now retired Alpha Helix. The Sikuliaq, owned by the National Science Foundation, with its initial science mission in 2014, is said to be one of the most advanced university research vessels, and will go into operation after delivery to the University of Alaska, Fairbanks (UAF). The vessel will be home ported in Seward, Alaska, at UAF’s Seward Marine Center. Length oa is 261.5ft, maximum beam 52.0ft and design waterline draught is 19.5ft. Displacement at the design waterline is 4,065 long tons. Sikuliaq is designed to reach 14 knots in calm waters.

The vessel was designed to leave the smallest environmental footprint possible, taking into consideration underwater radiated noise for marine mammals and fisheries. Up to 26 scientists and students, including those with disabilities, can be accommodated onboard. Operated by the UAF, and part of the US academic research fleet, the vessel has mild ice breaking capabilities for ice of up to 2.5ft thick. Thus, the vessel is capable of safely bringing scientists to the ice-choked waters of Alaska and the polar regions and of operating for longer periods of time than previously possible in the North Pacific Ocean, Gulf of Alaska, and the Bering, Chukchi, and Beaufort Seas.

Sikuliaq will be employed on research missions such as collecting sediment samples from the seafloor, hosting remotely operated vehicles, using a flexible suite of winches for handling of scientific equipment and conducting surveys throughout the water column and sea bottom with the use of extensive research instrumentation. It will be capable of transmitting real-time information ashore.

GPA says it was selected by MMC to assist with the design verification phase of the contract with UAF. GPA reviewed the design for compliance with the rules of ABS, USCG, SOLAS, stability requirements, the owner specifications, and various other criteria pertaining to good marine construction practices and shipyard building techniques. The final goal of the Design Verification was to turn over responsibility for the vessel design to MMC. Additionally, MMC had GPA develop several other functional design drawings for the shipyard, as well as detailed design for major foundations and key systems.