"If I wanted America to fail" (video)

Published on Apr 20, 2012 by FreeMarketAmerica

The environmental agenda has been infected by extremism—it’s become an economic suicide pact. And we’re here to challenge it. On Earth Day, visit www.freemarketamerica.org.

Comments Off on "If I wanted America to fail" (video) 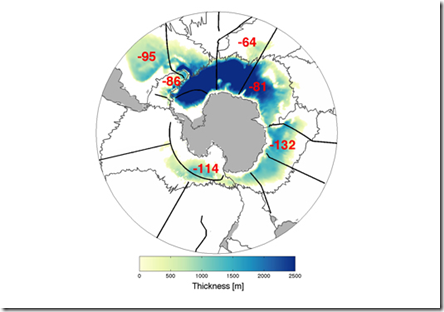 Scientists have found a large reduction in the amount of the coldest deep ocean water, called Antarctic Bottom Water, all around the Southern Ocean using data collected from 1980 to 2011. These findings, in a study now online, will likely stimulate new research on the causes of this change.

Two oceanographers from NOAA and the University of Washington find that Antarctic Bottom Water has been disappearing at an average rate of about eight million metric tons per second over the past few decades, equivalent to about fifty times the average flow of the Mississippi River or about a quarter of the flow of the Gulf Stream in the Florida Straits.

“Because of its high density, Antarctic Bottom Water fills most of the deep ocean basins around the world, but we found that the amount of this water has been decreasing at a surprisingly fast rate over the last few decades,” said lead author Sarah Purkey, graduate student at the School of Oceanography at the University of Washington in Seattle, Wash. “In every oceanographic survey repeated around the Southern Ocean since about the 1980s, Antarctic Bottom Water has been shrinking at a similar mean rate, giving us confidence that this surprisingly large contraction is robust.”

Antarctic Bottom Water is formed in a few distinct locations around Antarctica, where seawater is cooled by the overlying air and made saltier by ice formation. The dense water then sinks to the sea floor and spreads northward, filling most of the deep ocean around the world as it slowly mixes with warmer waters above it.

The world’s deep ocean currents play a critical role in transporting heat and carbon around the planet, thus regulating our climate.

“We are not sure if the rate of bottom water reduction we have found is part of a long-term trend or a cycle,” said co-author Gregory C. Johnson, Ph.D., an oceanographer at NOAA’s Pacific Marine Environmental Laboratory in Seattle. “We need to continue to measure the full depth of the oceans, including these deep ocean waters, to assess the role and significance that these reported changes and others like them play in the Earth’s climate.”

Changes in the temperature, salinity, dissolved oxygen, and dissolved carbon dioxide of this prominent water mass have important ramifications for Earth’s climate, including contributions to sea level rise and the rate of Earth’s heat uptake.

“People often focus on fluctuations of currents in the North Atlantic Ocean as an indicator of climate change, but the Southern Ocean has undergone some very large changes over the past few decades and also plays a large role in shaping our climate,” said Johnson.

The data used in this study are highly accurate temperature data repeated at roughly 10-year intervals by an international program of repeated ship-based oceanographic surveys. Within the U.S., the collection of these data has been a collaborative effort of governmental laboratory and university scientists, funded primarily by NOAA and the National Science Foundation. However, much of the data used in this study were measured by international colleagues.

“Collection of these data involves 12-hour days, seven days a week, of painstaking, repetitive work at sea, often for weeks on end with no sight of land. We are grateful for the hard work of all those who helped in this effort,” said Purkey.

A former Obama administration official is working with the United Nations to extend to “Mother Nature” all the civil rights afforded to human beings.

Van Jones, the erstwhile “Green Jobs Czar,” is using his influence to support a movement to establish a slate of global statutes that would protect planet Earth in as vigorous a manner as living beings. A story published by Fox News online records that:

The new movement is almost certain to be showcased at a U.N.-sponsored global summit on “sustainable development” to take place in Rio de Janeiro in May 2012, when similar issues of “global environmental governance” are a major focus of attention.

This effort is one aspect of the new role of Jones as a member of the board of the Pachamama Alliance, an organization committed to “creating a global movement to make human rights for Mother Nature an international reality — complete with enforceable laws — by 2014.”

Jones is accustomed to attaching his name to questionable causes. According to the Fox News story:

He resigned from the administration in September 2009 after making public apologies for some of his past actions, including the signing of a 2004 petition that questioned whether the Bush administration had deliberately allowed the Sept. 11, 2001 terrorist attacks to happen, and his previous affiliation with a self-described communist organization, the Standing Together to Organize a Revolutionary Movement (STORM).

Jones’s new affiliation with the Pachamama Alliance is consistent with his earlier work. On its website, the group proclaims that it “is working to build a movement of millions of educated and inspired individuals, with thousands of successful cases of enforceable Rights of Nature legislation having been enacted at local and national levels, by the end of 2014.”

Furthering the goals of the radical green agenda has been the primary avocation of Jones since leaving his post at the Obama White House. He is currently a senior fellow at the Center for American Progress, a group with close ties to controversial financier George Soros.

The efforts of Jones are not going unnoticed. In fact, many of the Central and South American nations stand behind the effort to make the planet a “person” in the eyes of international law. Specifically, the delegates to the United Nations from Bolivia, Ecuador, Venezuela, and Brazil are actively promoting the scheme.

Time is of the essence for Jones and his fellows. As reported:

This year, the global celebrations also start an unofficial countdown to the U.N.-sponsored global summit in Rio de Janeiro next year.

The summit, known in U.N. shorthand as Rio + 20, is intended as a 20th anniversary successor to the famous Earth Summit of 1992, which gave enormous stimulus and legitimacy to the global environmental movement.

“Rio + 20 is a good opportunity to have that step forward,” observed Pablo Salon, Bolivia’s ambassador to the U.N. “It would be like the Universal Declaration of Human Rights.”

Ambassador Salon told Fox News that Bolivia is cooperating with an affiliate of the greater Pachamama Alliance, known as the Pachamama Foundation, to promote its “nature rights campaign.”

This foundation is not new to the fight for Earth’s recognition as an equal to a person. According to reports, “it was instrumental in helping to install the same ‘fundamental rights for nature’ it espouses into the constitution of Ecuador in 2008.”

The foundation declares that its aim is to “promote an alternative and innovative model of development, based in good living and with an emphasis on recognition and respect for human rights and the rights of Nature.” One aspect of that goal is the push for “an alternate monetary system for use among native peoples in the Amazonian region.”

Recently, the Pachamama Alliance proudly proclaimed that “the Ecuadorian foundation has forged a strong relationship with the United Nations Development Program (UNDP), the U.N.’s flagship anti-poverty arm, as an official monitor of UNDP investment in the Amazon region.”

The Pachamama Alliance is adept at the manipulation of social media outlets to broadcast the tenets of its green gospel. YouTube, Twitter, and Facebook are the technological tracts being disseminated by the foundation.

Through such efforts, Pachamama is positioning itself as a player in the Rio environmental summit to be held next year. As a member of the board, Van Jones is giving the group the false appearance of some sort of official American endorsement of the radical green agenda.