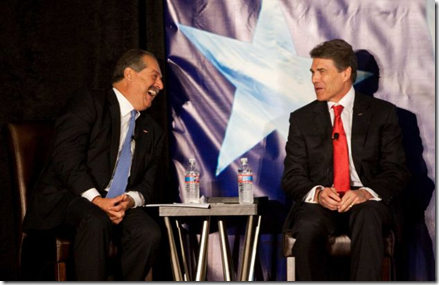 LAKE JACKSON – The shale boom’s bounty of cheap natural gas is fueling an industrial renaissance on the Texas coast, one that was in full focus Thursday as Dow Chemical announced the latest piece of a $4 billion expansion of its chemical operations in Southeast Texas.

The $1.7 billion plant Dow announced Thursday, one of four it plans to build or expand at its Freeport complex, is aimed at taking advantage of cheap natural gas produced from shale, which the company expects to be available for the long term.

“There is enough responsible supply that the market will be attractive for decades to come,” Dow CEO Andrew Liveris said in an interview with the Houston Chronicle.

The four plants would create more than 4,800 jobs at their construction peaks and would support up to 600 permanent jobs, with average salaries of $75,000, when completed.

The plants would not have been viable in the United States before the boom in production of domestic fossil fuels from shale, which has flooded markets with of cheap natural gas, he said.

“If you had told me 10 years ago I’d be standing up on this podium making this announcement, I would not have believed you,” Liveris said, flanked by Gov. Rick Perry and Lt. Gov. David Dewhurst during an announcement Thursday at Brazosport College.

“Even though Texas had its great mechanisms to attract business, the cost of energy, the cost of feedstocks, which would have been the price of oil and the price of gas, was pricing the United States out of the market,” he said. But the shale “miracle” changed that.

The main attraction Thursday was Dow’s plan for an ethylene cracker that will convert natural gas and its liquid byproducts, such as propane, butane and ethane, into building blocks of plastics used in water bottles, vinyl and other items.

Other chemical companies also are betting on bountiful supplies of natural gas.

Chevron Phillips said this month it will build a $1 billion chemical plant at its Baytown facility, largely because of cheap natural gas liquids.

Shell is evaluating plans to build a major plant in Pennsylvania, which also would leverage cheap liquids to produce chemicals used in a broad array of products.

Liveris said natural gas would have to rise to above $10, with oil prices remaining above $100, to cause concerns about a return on its investment.

Dow believes a substantial jump in gas prices is unlikely, unless the government allows a surge in liquefied natural gas exports or offers dramatic subsidies to encourage greater use of natural gas-fueled cars.

“There’d be a lot more than just us screaming from every corner of Washington and state legislatures that get involved with that,” Liveris said.

Keeping it at home

Liveris argued that gas should not be exported on its own but used to produce products for export at higher values.

“Why don’t we take this gas and create 15 to 20 times value added and not export it as liquid but export is as solid?” he asked.

Perry said the Texas Enterprise Fund will invest $1 million in the new Dow facility. The total is less than a tenth of 1 percent of the plant’s overall costs, but Perry said the investment played into the company’s decision to locate the plant in Texas.

Liveris called Texas’ partnerships with businesses an example for the nation to follow.

While the Texas Enterprise Fund was a small factor, the plant’s location will allow for it to be integrated easily with Dow’s existing facilities in the area, said Jim Fitterling, Dow’s president of feedstocks, energy and corporate development.

Dow, based in Midland, Mich., expanded its operations to the Texas coast 70 years ago and has maintained a strong presence ever since. The new plants will make Freeport Dow’s largest petrochemical complex and one of the world’s biggest, Liveris said.