Maersk Bags Gulf of Mexico Contract for Its Under-Construction Drillship

More than one year prior to delivery Denmark’s Maersk Drilling has signed a contract with a major oil company for the first in a series of four identical ultra deepwater drillships currently under construction.

The contract duration is three years and commencement is expected by end 2013 upon delivery from Samsung Heavy Industries in South Korea and mobilization to the US Gulf of Mexico. The estimated contract value is USD 610 million including mobilization, but excluding cost escalation and performance bonus.

“With the signing of this contract for the first of our four ultra deepwater newbuild drillship we are able to add another USD 610 million to our contract backlog providing a solid basis for our further growth,” says Claus V. Hemmingsen, CEO of Maersk Drilling and member of the Executive Board of the A.P. Moller – Maersk Group. “The US Gulf of Mexico remains a focus area of Maersk Drilling, and we are pleased to enhance our presence in this attractive market. With permitting activity normalizing after the Macondo incident in 2010 and the lease sales in the region, we believe the fundamental demand for our services in this region is in place”.

Maersk Drilling has performed deepwater operations in the US Gulf of Mexico since 2009 with the ultra deepwater semi-submersible MÆRSK DEVELOPER.

In 2011 Maersk Drilling ordered four ultra deepwater drillships at Samsung Heavy Industries in South Korea. The rigs will be delivered in 2013 and 2014. The total investment was USD 2.6 billion.

The design and capacities of the new drillships include features for high efficiency operation. Featuring dual derrick and large subsea work and storage areas, the design allows for efficient well construction and field development activities through offline activities.

With their advanced positioning control system, the ships automatically maintain a fixed position in severe weather conditions with waves of up to 11 metres and wind speeds of up to 26 metres per second.

Special attention has been given to safety onboard the drillships. Equipped with Multi Machine Control (MMC) on the drill floor, the high degree of automation ensures safe operation and consistent performance. Higher transit speeds and increased capacity will reduce the overall logistics costs for oil companies.

Your Quick Guide To The IMF-World Bank Meetings Today

Their focus? The funding available to the IMF, specifically to support the ongoing debt and bank crises in Europe.

Countries in Europe and Asia have expressed interest and even firm commitments in contributing more money to the fund. The U.S. and Canada, however, have said they won’t contribute any more cash to an effort EU leaders should be able to resolve themselves.

While we could hear more pledges over the course of the day, so far Japan, Switzerland, Poland, Sweden, Denmark, Norway, and the euro area have all made dollar commitments totaling $320 billion, according to Bloomberg:

Punch Drunk in the Oval Office

Could someone get the President some new speechwriters? President Obama is woefully in need of new vocabulary, as a recent expose by Danish television hilariously and embarrassingly reveals.

For leaders of smaller nations, a meeting and a photo op with the American President in the White House is always a huge thrill. And so Danish Prime Minister Helle Thorning-Schmidt was no exception when she received the presidential treatment on February 24, basking in the glow of President Obama’s approval. The President (rightly) praised Denmark’s military contribution in Afghanistan and Libya, saying that the small Nordic country of 4.5 million people ”punches above its weight.”

As sweet as this praise must have been to the ears of the Danish prime minister, it was soon tempered by revelations that President Obama is very free with the use of this phrase. Danish television clipped together a montage showing Obama complimenting the leaders of Norway, Ireland, and the Philippines in exactly the same words, all for ”punching above their weight.” President Obama apparently has not used the expression about the British, despite the fact that he borrowed it from British Foreign Minister Douglas Hurd.

The conservative Danish newspaper Jyllands–Posten noted that Obama must really be pleased with the Danes, as he said the same thing to the previous Danish prime minister, Lars Løkke Rasmussen, during his state visit last year, sitting in the very same armchairs under the same picture of George Washington. Meanwhile, an editorial in the left-of-center newspaper Politiken grumbled that it was the unfortunate Danish desire to ”punch above their weight” that had gotten the Danes involved in the Iraq war and other American affairs. The newspaper advocated that Danes stick to their own bantam weight class in the future.

The real question might be, however, whether the United States under President Obama is punching below its weight, making the contributions of others seem all the greater. From premature military withdrawals from Iraq and Afghanistan to selling out U.S. missile defense to the Russians and mouthing mechanical blandishments to U.S. allies like the Danes, President Obama is squandering a great foreign policy legacy.

Helle C. Dale is Senior Fellow in Public Diplomacy at The Heritage Foundation—and a native of Denmark.

Comments Off on Punch Drunk in the Oval Office 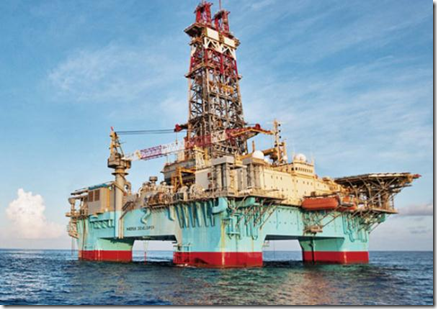 Under the contract, the rig, owned by Denmark’s Maersk Drilling, will continue to work for Statoil in the US Gulf of Mexico. The duration of the option is two years with start scheduled for 4 November 2013 when the firm contract runs out. The contract value for the option period is approximately USD 370 million.

“We are very pleased to continue our cooperation with Statoil, one of our key clients, for this highly advanced deepwater rig,” says Claus V. Hemmingsen, CEO of Maersk Drilling.

“Having secured contracts for all our deepwater semisubmersibles until mid 2014 is a milestone in Maersk Drilling’s ambition of becoming a leading provider of highly advanced ultra deepwater rigs.”

Delivered in 2009, Maersk Developer is the first in a series of three state-of-the-art ultra deepwater development semi-submersibles in Maersk Drilling’s fleet. Since its delivery the rig has been employed in the US Gulf of Mexico.

“I think that China together with other nations is taking a huge interest in the Arctic area in general and specifically in Greenland, and we have seen quite a number of visitors from China over the last couple of years,” Prime Minister Kuupik Kleist said this week. “We don’t really have that much co-operation for the time being, but I know that Chinese companies are showing an interest in Greenland.”

“Greenland is also showing an interest in China: my minister for minerals (and industry) and labor is going to China today on an official visit. I would see a future co-operation as a very positive one and we welcome the Chinese interest,” he continued.

There’s a few reasons why this is interesting:

We hadn’t really considered Russia a true player in the great Arctic land grab before — but maybe that needs reconsidering.