The press corps appeared stunned by the uncharacteristic outburst from Mr. Obama, who then unleashed a ten-minute tirade at the stone-faced Russian President.

“Look, I’m not just talking about Snowden and Syria,” Mr. Obama said. “What about Pussy Riot? What about your anti-gay laws? Total jackass moves, my friend.”

As Mr. Putin narrowed his eyes in frosty silence, Mr. Obama seemed to warm to his topic.

“If you think I’m the only one who feels this way, you’re kidding yourself,” Mr. Obama said, jabbing his finger in the direction of the Russian President’s face. “Ask Angela Merkel. Ask David Cameron. Ask the Turkish guy. Every last one of them thinks you’re a dick.”

Shortly after Mr. Obama’s volcanic performance, Mr. Putin released a terse official statement, reading, “I should be afraid of this skinny man? I wrestle bears.”

After one day of meetings, the G20 nations voted unanimously on a resolution that said maybe everyone should just go home. 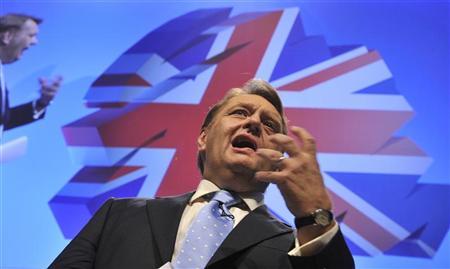 (Reuters) – Britain sent a clear signal of support to its oil and gas industry when it named an advocate of shale gas fracking as environment minister and a wind farm sceptic as energy minister.

The appointments in Prime Minister David Cameron‘s ministerial reshuffle on Tuesday mark a departure from his pledge to run Britain’s greenest government, in favour of the fossil fuel sector that generates billions of pounds in tax revenue.

“There is a shift away from greener ministers in posts towards less green ministers and I think that’s serious,” Alan Whitehead, a member of the Energy and Climate Change Select Committee, said during an industry event on Tuesday.The government last year put a brake on the development of shale gas extraction due to environmental concerns after it triggered two small earthquakes near Blackpool.

But Owen Paterson, a member of Cameron’s Conservative Party who was appointed Environment Secretary in the reshuffle, has hailed the potential economic benefits of shale gas, a message likely to sway the country’s decision in favour of the drilling method.

“If developed safely and responsibly, shale gas could generate massive economic activity and a wealth of new jobs,” Paterson said in May, when he was Secretary of State for Northern Ireland.

He said huge shale gas deposits in Northern Ireland could be exploitable, adding that discoveries in the United States had shrunk its gas price to a quarter of British levels.

The decision on whether Britain will resume shale gas fracking, a method of drilling through shale deposits to retrieve gas by injecting liquids and chemical, is in the hands of the energy ministry, but support from the Department for Environment could speed up a decision.

In his final media interview as Energy Minister, Hendry said a decision on shale gas was not imminent, but that Britain could not ignore its impact on the U.S. energy market.

Hayes has been a vocal opponent of wind farms, a technology the government regards as key to meeting climate change goals.

“Such tall structures will have a detrimental impact on the quality of life for local residents, the attractiveness of the area and its potential for tourism,” Hayes said at a local council meeting, reflecting the views of his constituents campaigning against the construction of a wind farm.

He said wind farms would always be backed up by conventional power plants because of their unreliability and that they had a detrimental impact on wildlife.

Comments Off on Britain appoints oil and gas friendly decision-makers