Spain says markets are closing to it as G7 confers 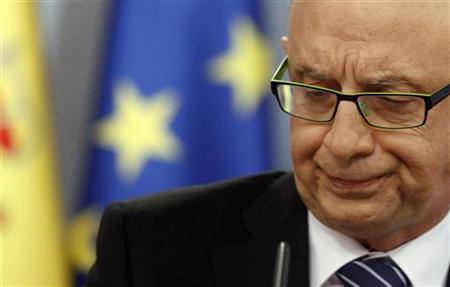 (Reuters) – Spain said on Tuesday that credit markets were closing to the euro zone’s fourth biggest economy as finance chiefs of the Group of Seven major economies were to hold emergency talks on the currency bloc’s worsening debt crisis.

Treasury Minister Cristobal Montoro sent out the dramatic distress signal in a radio interview about the impact of his country’s banking crisis on government borrowing, saying that at current rates, financial markets were effectively shut to Spain.

The country, which enjoyed rapid growth after it joined the euro at its launch in 1999, is beset by bank debts triggered by the bursting of a real estate bubble, aggravated by overspending by its autonomous regions.

The risk premium investors demand to hold Spanish 10-year debt rather than the German equivalent hit a euro era high of 548 basis points on Friday, on concerns that Spain’s fragile banking system and heavily indebted regions will eventually force it to seek a Greek-style bailout.

Montoro said Spanish banks should be recapitalized through European mechanisms, departing from the previous government line that Spain could raise the money on its own and prompting the Madrid stock market to rise.

But his comments on Spain’s borrowing sent the euro down after the 17-nation European currency earlier hit a one-week high against the dollar on expectations that a conference call of G7 finance ministers and central bankers may hasten bold action.

The European Central Bank holds its monthly rate-setting meeting on Wednesday and European Union leaders meet on June 28-29 to discuss their strategy for overcoming the two-year-old crisis which has already seen Greece, Ireland and Portugal forced to accept international bailouts.

Investors have fled peripheral euro zone sovereign debt for the relative safe haven of German Bunds and U.S. and British government bonds amid worries about Spain’s banking crisis and fears that a June 17 Greek election could lead to Athens leaving the euro, setting off a wave of contagion around the euro area.

Spain will test the market on Thursday by issuing between 1 billion euros ($1.24 billion) and 2 billion euros in medium- and long-term bonds at auction.

But his dramatization of the debt situation set a stark backdrop for the conference call of the United States, Canada, Japan, Germany, France, Italy and Britain, plus European Union officials, which two G7 sources said would start at 1100 GMT.

Montoro’s comments appeared aimed at pressuring the ECB and EU paymaster Germany to find ways of intervening. But the central bank has so far shunned calls to resume purchases of Spanish government bonds, and Berlin has said it is up to Madrid to decided whether to apply for assistance if it needs help.

Spain has been trying to persuade EU partners to allow direct aid from the euro zone’s rescue fund to recapitalize its banks without making it submit to the political humiliation of a full-fledged assistance programme, officials say.

The festering euro zone crisis has sparked mounting concern outside Europe, with the United States fretting that it could further harm its faltering economic recovery, and countries such as Japan and Canada fearing fallout for the global economy.

“We have reached a point where we need to have a common understanding about the problems we are facing,” Japanese Finance Minister Jun Azumi told reporters.

Ottawa and Washington both called for action after a G7 source said fears that capital flight from Spain could escalate into a full-fledged bank run had triggered the emergency talks.

“Markets remain skeptical that the measures taken thus far are sufficient to secure the recovery in Europe and remove the risk that the crisis will deepen,” White House press secretary Jay Carney told reporters.

In a sign of increasing concern about the euro area’s debt crisis, Australia’s central bank cut interest rates by 25 basis points to 3.50 percent, the lowest level in two years. It cited further weakening in Europe and a deterioration in market sentiment.

Pressure is building in particular on Germany, the biggest contributor to euro zone rescue funds, to back away from its prescription of fiscal austerity for the region’s weaker economies and to work harder on fostering short-term growth.

Berlin argues that it is already doing its share by encouraging above-inflation domestic wage settlements, accepting the prospect of higher-than-usual German inflation and most recently agreeing that Spain should have more time to achieve its fiscal targets.

Furthermore, Chancellor Angela Merkel opened the door on Monday to the prospect of a euro zone banking union in the medium term, saying she would discuss with EU authorities the idea of putting systemically important cross-border banks under European supervision.

A German government strategy paper seen by Reuters sets out a timetable for closer fiscal union in the euro zone, but Berlin does not expect final decisions on strengthening economic policy coordination until March 2013, with only a roadmap being agreed at this month’s summit.

A G7 source familiar with plans for the call said the group would urge more progress at this month’s EU summit, though this alone would probably disappoint global markets.

Central banking sources said the ECB could contribute by cutting its main interest rate, lowering its deposit rate to try to shake loose some 700 billion euros parked overnight in its vaults by anxious banks, or by providing a third big liquidity injection to banks.

Some analysts believe the bank is more likely to await the outcome of the Greek election and the EU summit before taking decisive action.

A G7 source said there was only a very small chance the G7 would go as far as to pledge coordinated action to curb excessive currency volatility. Japan, for one, fears a strong yen, which has been a safe haven for investors during the euro zone crisis, could help tip its economy into recession.

The G7 could also call for concerted action at the upcoming summit of the wider Group of 20 major economies in Mexico on June 18-19, the source said. The G20, which includes China, played a prominent role during the 2008-2009 financial crisis.

A G20 official in Asia said the grouping, which also includes Brazil and India, could look to put pressure on Germany to switch to stimulus mode, as part of a wider call for strong, developed economies to step up spending.

“Germany and Canada could be seen as those having fiscal capabilities among the advanced economies,” the official said.