“I’m encouraged that the companies have made significant progress in advancing a project and an associated schedule for commercializing North Slope gas,” Governor Parnell said. “Clearly, they have fully shifted their efforts to an Alaska LNG project.”

The companies’ letter addresses a critical benchmark that Governor Parnell laid out in his January State of the State address, calling on the companies to harden the numbers on an LNG project and identify a project timeline by the end of the third quarter.

The letter also addresses an additional third-quarter benchmark that Governor Parnell laid out in his address, calling on the companies to complete their discussions with the Alaska Gasline Development Corporation (AGDC) on the potential to consolidate their work. In the letter, the companies said they have established a cooperative framework with AGDC to share information.

Prior to the announcement, ExxonMobil, ConocoPhillips and BP had met two earlier benchmarks laid out in Governor Parnell’s State of the State address. On March 29, the state and the companies resolved the Point Thomson litigation. The following day, the companies announced their alignment “on a structured, stewardable and transparent approach with the aim to commercialize North Slope natural gas within the Alaska Gasline Inducement Act (AGIA) framework.”

Letter from the producers and TransCanada provide details on the team they have assembled and the team’s activities in developing a project, building on their previous work to commercialize North Slope gas. The documents include a project timeline and a cost range covering various stages in the project development schedule and work plan. The documents also provide new details regarding the components of an Alaska LNG project, including a liquefaction facility, gas production and storage, a large-diameter pipeline, and a gas treatment plant.

Over the past six months, more than 200 employees from the four companies have been working on managerial, technical, and commercial aspects during this phase of the project schedule, according to the letter.

Given the massive size of the North Slope conventional gas resource (35 trillion cubic feet of reserves and more than 200 trillion cubic feet of undiscovered, technically recoverable resources) and the scope of the project as described by the companies, an Alaska LNG project will be one of the largest in the world.

While the companies have been developing their LNG project design, the Parnell administration has undertaken significant outreach to Pacific Rim markets to highlight the comparative advantages of Alaska LNG exports, and to other key stakeholders, including U.S. government officials in charge of export licensing.

The most recent of these efforts was Governor Parnell’s trade mission in September to South Korea and Japan, where he discussed Alaska LNG exports with leading government and industry officials. 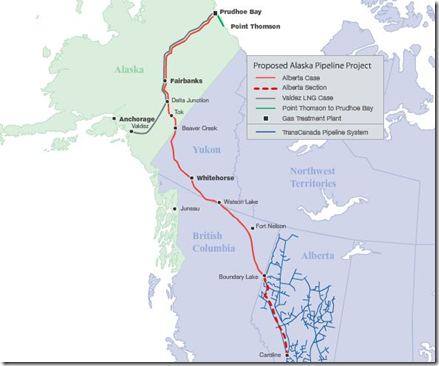 ExxonMobil, ConocoPhillips, BP and TransCanada, through its participation in the Alaska Pipeline Project, announced that they are working together on the next generation of resource development in Alaska.

The four companies have agreed on a work plan aimed at commercializing North Slope natural gas resources within an Alaska Gasline Inducement Act (AGIA) framework. Because of a rapidly evolving global market, large-scale liquefied natural gas (LNG) exports from south-central Alaska will be assessed as an alternative to a natural gas pipeline through Alberta.

“Commercializing Alaska natural gas resources will not be easy. There are many challenges and issues that must be resolved, and we cannot do it alone. Unprecedented commitments of capital for gas development will require competitive and stable fiscal terms with the State of Alaska first be established,” the CEOs of ExxonMobil, ConocoPhillips and BP wrote in a joint letter to Governor Sean Parnell.

The producing companies support meaningful Alaska tax reform, such as the legislation introduced by Governor Parnell, which will encourage increased investment and establish an economic foundation for further commercialization of North Slope resources.

The meeting took place at the request of Governor Parnell after he publicly called on the three companies – the major lease holders for gas reserves on the North Slope – to work together on developing a liquefied natural gas (LNG) project that focuses on exporting Alaska North Slope gas to Asia’s growing markets.

The governor invited the three CEOs to meet with him to discuss the opportunities for commercializing North Slope gas and the project’s importance to Alaskans.

“We had a productive discussion about how to get alignment between the companies and grow Alaska’s economy through oil and gas development,” Governor Parnell said. “I made it clear that we want to see progress on commercializing Alaska’s gas for Alaskans and markets beyond.”

The Parnell administration is targeting LNG exports to Asia given increasing demand there.

Governor Parnell and the CEOs – Bob Dudley of BP, Jim Mulva of ConocoPhillips and Rex Tillerson of Exxon Mobil – met for two hours. During the meeting, the CEOs briefed the governor on the extensive work they’ve been doing in response to his request.

“I appreciate the willingness of the chief executives to come to Alaska to discuss the important topic of commercializing North Slope gas,” Governor Parnell said. “For a gas project to advance, all three companies need to be aligned behind it. This meeting is an important step, but much work remains.” 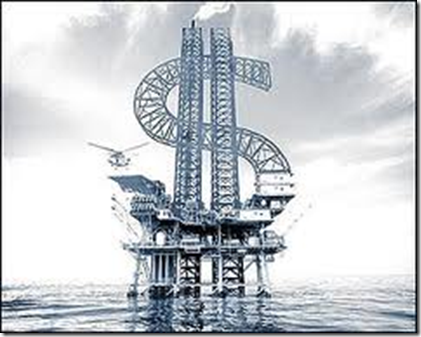 Jenga! ConocoPhillips just knocked a big hole in the delicate logistical edifice on which the biggest anomaly in the oil world has been balancing.

In oil markets, 2011 has been the year of the great Brent spread. The North Sea crude oil benchmark has been trading at an unusually high premium to U.S. West Texas Intermediate oil for much of the year after many years of rough parity or trading at a slight discount.

On one side, the Libyan conflict pulled up demand for Brent. On the other — as discussed in this “Heard on the Street” column from February — logistical constraints have kept an increasing amount of oil bottled up in the Midwest. As Cushing, OK is where the WTI contract is settled physically, this glut has kept WTI prices depressed, widening the spread. Having started the year trading at a premium of $3.37 a barrel to WTI, Brent’s lead hit a peak of almost $27 on September 6th.

Now one of those bottlenecks on WTI is likely to be eased. Conoco is selling its 50% stake in the Seaway pipeline to Canada’s Enbridge Inc. Conoco kept the pipeline running northwards, i.e. bringing oil from the Gulf coast to Cushing. This kept oil bottled up in the Midwest, meaning Conoco’s refineries there had access to cheaper raw material, allowing them to generate big profits. Now that Conoco is splitting itself, it has no need for Seaway. And Enbridge, as a pipeline operator, has no incentive to keep the pipeline flowing north. By the second quarter of 2012, it expects Seaway to be transporting 150,000 barrels per day from Cushing to the Gulf coast, alleviating the WTI glut.

As of now, Brent’s premium to WTI has collapsed another $2.37 this morning, and is now down under $11 a barrel. As more pipelines get built over the next several years — including, perhaps, a rerouted Keystone XL — the great 2011 spread will be but a fond memory in oil refiners’ minds.

Comments Off on Conoco’s Brent Control

ConocoPhillips Sells $2B in Pipeline Assets

ConocoPhillips announced that as part of its ongoing strategy to create shareholder value it has entered into agreements to sell its interests in two U.S. pipeline companies for a total of $2 billion.

ConocoPhillips has entered into definitive agreements with a subsidiary of Caisse de dépôt et placement du Québec (CDPQ) to sell its 16.55 percent interest in Colonial Pipeline Company and Colonial Ventures LLC (Colonial). The transaction is anticipated to close in the first quarter of 2012 following the completion of contractual Rights of First Refusal review by the existing shareholders in Colonial.

In addition, ConocoPhillips has entered into definitive agreements with Enbridge Holdings (Seaway) L.L.C., a subsidiary of Enbridge (U.S.) Inc., to sell its ownership interest in the Seaway Crude Pipeline Company (SCPC). The transaction is anticipated to close in December, subject to satisfaction of customary conditions precedent and completion of certain arrangements regarding other logistics services currently provided by SCPC to ConocoPhillips.

“These two sales of non-core pipeline assets are important components of our $15-20 billion divestiture program for the years 2010-2012. We are pleased that CDPQ and Enbridge have recognized the value of these quality assets,” said Al Hirshberg, senior vice president, Planning and Strategy, ConocoPhillips. “Through September 2011, the 2010-2012 divestiture program has yielded proceeds from asset dispositions of $8 billion. Once closed, these two transactions, along with other sales already closed in the fourth quarter, would increase that total to approximately $10.5 billion, and strongly position us to accomplish our target by the end of 2012.”

The sale of the Colonial and Seaway interests is just one part of ConocoPhillips’ plan to create value for shareholders through a continued focus on disciplined capital investment, a strengthened financial position, improved returns on capital, and growth in shareholder distributions.

Comments Off on ConocoPhillips Sells $2B in Pipeline Assets