ATP Oil & Gas, a Gulf of Mexico focused operator, on Friday, August 17, filed a voluntary petition for reorganization under Chapter 11 of the Bankruptcy Code in the United States Bankruptcy Court for the Southern District of Texas.

ATP has taken this action in order to undertake a comprehensive financial restructuring.

“ATP expects its oil and gas operations to continue in the ordinary course throughout the reorganization process and sees the reorganization as a helpful step towards deleveraging the company to position it for future development of its assets. ATP believes that the rights and protections afforded it by a court-supervised reorganization process, including the ability to access new financing, will provide ATP with the time and flexibility it needs to fully address its financial challenges and position ATP for long-term viability,” wrote ATP in a press release.

The company said that the the primary reason for the reorganization began with the Macondo well blowout in April 2010 and the imposition beginning in May 2010 of the moratoria on drilling and related activities in the Gulf of Mexico.

“These events prevented ATP from bringing to production in 2010 and in early 2011 six development wells that would have added significant production to ATP. As of the date of this filing, three of these wells are yet to be drilled. Had ATP been allowed to drill and complete these wells, ATP believes it would have provided a material production change in 2010 continuing to today. This projected increase in production should have substantially increased cash flows, shareholder value and allowed the company the ability to withstand normal operational issues experienced by owners of oil and gas properties in the Gulf of Mexico. In addition, these incremental cash flows would have mitigated or prevented the need to enter into many of the financings ATP has closed since the imposition of the moratoria—financings that require relatively high rates of return and monthly payments” said the company in a statement. 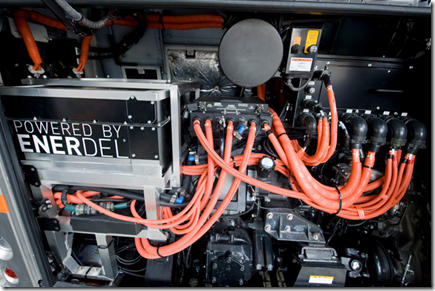 The company, Ener1, received a $118 million grant from DOE in 2010 as part of the president’s stimulus package. The money, which went to Ener1 subsidiary EnerDel, aimed to promote renewable energy storage battery technology for electrical grid use.

But despite generous federal support for the company, Ener1 was racked by problems last year. In October, NASDAQ delisted the company due to non-compliance with Securities and Exchange Commission filing requirements. A month later, the company’s president, chief executive, and top financial officer were fired.

On Thursday, Ener1 announced it will initiate a pre-packaged Chapter 11 bankruptcy plan as part of an agreement to restructure the company’s debt obligations.

Ener1, Inc. (OTC: HEVV) (the “Company”) today announced that it has reached agreement with its primary investors and lenders on a restructuring plan that will significantly reduce its debt and provide up to $81 million to recapitalize the Company to support its long-term business objectives and strategic plan.

To implement this restructuring plan, the Company has voluntarily initiated a “pre-packaged” Chapter 11 case in U.S. Bankruptcy Court in the Southern District of New York, in which it is requesting that the Court confirm a pre-packaged Plan of Reorganization to implement the restructuring.  The Company filed a proposed Disclosure Statement and Plan of Reorganization with the Court and anticipates completing the restructuring process in approximately 45 days…

The pre-packaged restructuring plan, which has been unanimously accepted by all of Ener1′s impaired creditors, provides for a restructuring of the Company’s long-term debt and the infusion of up to $81 million of equity funding, which will support the continued operation of Ener1′s subsidiaries and help ensure that the restructuring will not adversely impact their employees, customers and suppliers.  Of this amount, a new debtor-in-possession (DIP) credit facility of up to $20 million will be available upon Court approval to support working capital needs during the restructuring.  The balance, for a total of up to $81 million, will be available over the four years following Court approval of the restructuring plan and subject to the satisfaction of certain terms and conditions.

Ener1 is not the first energy storage technology company to file for Chapter 11 after receiving significant stimulus support. Beacon Power, which manufactures flywheel energy storage technology, received a $43 million loan guarantee from the same stimulus program that funded Solyndra. Despite having used $3 million marked for loan repayment to continue funding its daily operations, Beacon filed for Chapter 11 in November.

Comments Off on Another Stimulus-Backed Energy Company Files for Bankruptcy