Yesterday, the Department of the Interior took the latest step as part of President Obama’s all-of-the-above energy strategy to expand safe and responsible domestic energy production, holding a 39 million acre lease sale in the Gulf of Mexico.

Secretary of the Interior Ken Salazar announced that the Central Gulf of Mexico oil and gas lease sale attracted $1,704,500,995 in high bids for tracts on the U.S. outer continental shelf offshore Louisiana, Mississippi and Alabama. A total of 56 offshore energy companies submitted 593 bids on 454 tracts covering more than 2,402,918 acres. The sum of all bids received totaled $2,602,563,726.

The lease sale builds on a series of actions taken by the Obama administration, including additional lease sales for both onshore and offshore areas for oil and gas development, to meet the President’s direction to continue to expand safe and responsible production of America’s important domestic resources.

“This sale, part of the President’s all-of-the-above energy strategy, is good news for American jobs, good news for the Gulf economy, and will bring additional domestic resources to market,” said Salazar, who opened the sale. “When it comes to domestic production, the President has made clear he is committed to expanding oil and natural gas production safely and responsibly, and today’s sale is just the latest example of his administration delivering on that commitment. The numbers speak for themselves: every year the President has been in office, domestic oil and gas production has increased, foreign imports of oil have decreased, and we are currently producing more oil than any time in the past eight years.”

The Central Gulf of Mexico Lease Sale 216/222, conducted by the Bureau of Ocean Energy Management (BOEM), offered more than 39 million acres for oil and gas development on the U.S. Outer Continental Shelf. The acreage included 7,434 tracts from three to more than 230 miles off the coast, in depths ranging from 10 to more than 11,200 feet (3 to 3,400 meters). BOEM estimates the economically recoverable hydrocarbons that could be produced as a result of the acreage offered ranges from 0.8 to 1.6 billion barrels of oil and 3.3 to 6.6 trillion cubic feet of natural gas.

The sale builds on the successful Western Gulf of Mexico lease sale held by BOEM in December 2011 that made available more than 21 million acres – equal to an area the size of South Carolina – and attracted more than $337 million in high bids and included 20 companies submitting 241 bids on 191 tracts comprising over a million acres offshore Texas. In 2010, DOI offered nearly 37 million offshore acres to industry for oil and gas leasing.

“Before moving forward with Sale 216/222, we conducted a rigorous analysis of the environmental effects of the Deepwater Horizon oil spill on the Central Gulf of Mexico,” said BOEM Director Tommy P. Beaudreau. “We have also continued a number of lease terms designed to ensure fair return to the American people and provide innovative incentives to promote diligent development of our nation’s offshore oil and gas resources.”

Lease terms for both sales included escalating rental rates to encourage faster exploration and development of leases as well as shorter lease terms for shallower water in order to encourage timely development. BOEM has increased its minimum bid requirement in deepwater to $100 per acre, up from $37.50 in previous Central lease sales. Rigorous historical analysis showed that leases that received high bids of less than $100 per acre have experienced virtually no exploration and development activities.

Lessees will have to comply with a series of important environmental stipulations, including requirements to protect biologically sensitive features, as well as marine mammals and sea turtles, and employ trained observers to ensure compliance and restrict operations when conditions warrant. These terms will help ensure an appropriate balance of responsible resource development with protection of the human, marine and coastal environments.

Each high bid on a tract will now go through a strict evaluation process within BOEM to ensure the public receives fair market value before a lease is awarded. This is the final Gulf Lease Sale scheduled in the current Outer Continental Shelf Oil and Gas Leasing Program: 2007-2012.

Bids come from oil majors for the 15 blocks offered by the Uruguayan government for the oil exploration and production in the Oriental del Plata, Pelotas and Punta del Este offshore basins.

Uruguay’s second offshore licensing round (Ronda Uruguay II) attracted interest of eleven oil companies but nine of them qualified for the bidding process.

The marine platform is already explored by a consortium of Petrobras, YPF and Galp, that were the bidding winners in the first Uruguay Round in 2009. According to ANCAP authorities there is a big increase in the oil sector interest on the Uruguayan offshore, when compared with the first bid where only six oil companies asked for qualification.

ANCAP is expected to come up with the results of the bidding later during the day.

It has said it aims to lease a floating storage and regasification unit (FSRU) of at least 130,000 cubic metres of LNG under long-term contract or acquire it under a build-operate-transfer transaction.

Klaipedos Nafta, which is in charge of the project, said on Wednesday it would review the proposals and would invite those meeting the qualification requirements to hold negotiations.

The company did not disclose the names of three bidders.

U.S.-based Cheniere Energy , which wants to supply Lithuania with LNG, was reported in May to have expressed interest in taking a part in the Lithuanian terminal project.

The government hopes that the LNG terminal, estimated to cost about a billion litas ($400.3 million), would help to cut energy dependence on Russia’s Gazprom , now the sole supplier of gas to the Baltic state, and reduce prices it pays for gas.

The final deal on the FSRU procurement is expected to be signed by the end of the year. 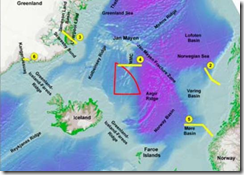 The National Energy Authority of Iceland (NEA), yesterday, announced the second Licensing Round for hydrocarbon exploration and production licences on the Icelandic Continental Shelf. The offer will be open from October 3, 2011 until April 2, 2011.

The blocks on offer in the Second Licensing Round are located in the Dreki Area, northeast of Iceland, from 67°00′N to 68°30′N and 11°30′W to 6°20′W. The area covers 42,700 square kilometers. Water depths range mostly from 800-2000 meters, which is well within the reach of currently available and tested technology for undersea oil drilling.

The Dreki Area is a part of the Jan Mayen Ridge micro-continent, which was separated from the continental shelf of Greenland and Norway by plate tectonic movements 45-60 million years ago. Seismic surveys and other geophysical measurements indicate that oil and gas could be found in the Dreki Area as they have been in adjacent and geologically similar areas. Further research, including exploratory drilling, is necessary to verify whether oil or gas exists in the Dreki Area.

There will be stringent requirements on security and work safety as well as on environmental protection similar to the requirements in the neighbouring countries. Use of the best available technology will be demanded to reduce the environmental impact and risk of accidents and mishaps.

A Strategic Environmental Assessment has been completed for the Dreki Area and considerable research has been done on the marine biosphere, climate and sea conditions in the area. There is no danger of sea ice under present climatic conditions and the wave heights are lower than off the west-coast of Norway. This research is important in evaluating the impact of oil exploration. No major obstacles were found to oil exploration.

Comments Off on Iceland Calls for Offshore Exploration Bids

The Government says it will be hosting meetings with prospective bidders for the Jamaica’s Liquid Natural Gas (LNG) supply project and the building of a Floating and Regasification Terminal next week.

The meetings are to take place on Monday and Thursday at the Jamaica Pegasus Hotel. Minister of Energy and Mining, Clive Mullings and Chairman of the LNG Steering Committee, Christopher Zacca are expected to speak at both pre-bid meetings.

The Office of the Prime Minister says pre-bid meetings are opened to all interested bidders but that attendance is not required to submit a proposal in response to the project.

The Government was forced to re-tender the bid for the Floating Storage and Regasification Terminal after the Contractor General, Greg Christie, alleged there had been irregularities in the bidding.

Christie had said the eventual winner, the Exmar Consortium, had been given an unfair advantage. However, this week the Office of the Director of Public Prosecutions said there was no evidence to draw the inference that Exmar’s advantageous position was the result of bid-rigging or corruption.