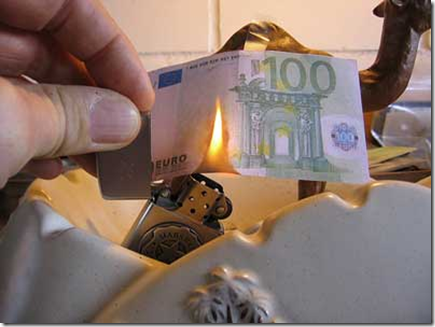 Nomura Global FX analysts are expecting a huge depreciation in the value of the euro against the dollar in the next four months, according to an investor note out yesterday.

They argue that one euro will fall to just $1.20 within the next four months, compared to a current value around $1.34. What’s more, they think this estimate has downside risks.

Their analysis is predicated on a baseline scenario that EU leaders will put stop-gap measures in place in the near-term but will ultimately have to adopt large-scale QE to stave of the crisis in the medium term.

From their investor note:

In our central case, in which the ECB will be forced into a delayed and reactive large-scale QE, risk assets could trade better over  time (assuming that the QE amount is sufficient). But it is likely to be seen as a change in the ECB reaction function, and hence we think EUR/USD would trade lower in the medium term. AUD, CAD and EM FX should perform quite well in this scenario.

This forecast takes into account their prediction that the Fed will announce new easing measures early in the year.

We also expect ECB QE and  although the immediate effect upon announcement of such measures may well be  EUR bullish, large-scale monetization is likely to weigh negatively on the EUR in the medium term, hence providing an offsetting force to any USD negativity related to Fed QE3.