U.S. Goes Public with Support for Hired Guns Against Piracy 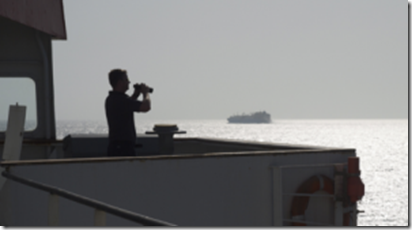 Somalia Report leaked the internal memo from Hillary Clinton directing all regional embassies to pitch the use of armed contractors on board ships. This is in line with and expands upon the UK’s approval of private security companies on just their ships. This is akin to legalizing band aids without actually curing the wounds that require them.

What also makes the U.S. stance unusual is that Clinton has reversed her aggressive election-era stance against the use of private security and become a behind-the-scenes supporter.

A November news conference in DC confirms that the United States is now officially supporting the use of private security companies aboard commercial vessels. Andrew J. Shapiro, Assistant Secretary, Bureau of Political-Military Affairs was assigned the task of communicating this reversal while addressing the Defense Trade Advisory Group (DTAG).

The simple approval of the use of deadly force and non-state actors has a number of implications. Foremost would be how do deal with the general agreement and public statements by large shipping companies that they view the responsibility of maritime security to be rooted in the flag carrier, navies and legitimate purveyors of deadly force, not the maritime industry. The industry and mariners do not see themselves as the law of the sea and only view the use of armed guards as a last resort.

The recent piracy trend in Somalia actually began in 2000 when UK trained armed Somali guards decided to hijack ships they were hired to protect. The most memorable incident was when Canadian company SomCan’s first contract in Puntland ended in 2005, when three of its own employees were arrested for hijacking a Thai fishing trawler and demanding $800,000 ransom. The current State Department may be a little short on historical briefings when it comes to Somalia.

Nations with naval power like the US and the UK only flag a tiny almost insignificant percentage of the world’s commercial fleets, making their stance more posturing than productive. The international nature of the maritime business where the largest number of mariners typically come from the poorest countries and flags of convenience being chosen more for their regulation loopholes than their military might are the de facto standard.

Pirates have been using western coast guard skills and criminal zeal to mine the insurance gap for almost a decade now. It might be the only $100M plus a year maritime business here millions of dollars are regularly paid tax free to men wearing flip flops and rusty AKs. If a hijack scenario was played out inside any western nation, a much different approach would be used. It is the insurance companies that demand the use of armed security guards on ships, not the maritime industry. And the new support of this industry based on “no armed ship grabbed by pirates” mantra does not excuse nations from defending their citizens and business interests overseas.

This direct endorsement of for-profit companies to do what navies were created to do is a seismic shift. All that is needed now is a letter of marque and a decent bounty on pirates to complete the scene. Something that mariners in the region might not be greatly opposed to but Somali fisherman might be opposed to.

There is also much work to do internationally to allow the unimpeded flow of vessels with weapons on board. Certain regions like the Suez controlled by Egypt specifically banned the presence of weapons and armed guards. Now they request a detailed list of weapons and personnel on board. Armed guards are confined to deploying from countries like Yemen or Oman who have a working relationship with security companies. But landing a ship in Mogadishu and offloading an armed crew would be violating the UN Arms Embargo. The world of user permits, arms control, general distrust of private security companies and concerns about the use of deadly force have led to like escort ships that keep the weapons off the ship but allow an armed presence.

Most legislation or industry rules are designed for land based security within a single country, making the transit of international waters and port hopping problematic for armed guards. This led to the white lie of security companies telling the customs brokers that they threw their weapons overboard when they docked with a client ship. The reality is they were kept in international waters.

The use of hired guns to fight pirates actually has historical roots in history but the political correctness of the times is sure to inflate the simple logical concept of trained ex-military quietly doing their job to the more cinematic treatment given security companies in Iraq. It should be the responsibility of the flag nation to defend the lives, hull and cargo of their ships complete with national assets providing the security but in a world of pragmatic choices it appears that hired guns will be riding shotgun on the world’s commercial fleets.

“Finally, I want to provide a brief update on our efforts to counter piracy off the Horn of Africa. This is another area where we are working very closely with industry.

Commercial shipping vessels transiting off the coast of Somalia are frequent targets for pirates. The lives of innocent seafarers have been lost and crews are often held hostage for many months in appalling conditions. The monetary total of ransoms demanded runs into hundreds of millions of dollars a year, with the total cost of piracy to the global economy estimated to be in the billions. With so much water to patrol it is difficult for international naval forces in the region to protect every commercial vessel. Working with industry, we recently established a national policy encouraging countries to allow commercial ships transiting high-risk waters to have armed security teams on board.

The reason for this is simple: to date no ship with an armed security team aboard has been successfully pirated. We believe that the expanded use of armed security teams by commercial vessels is a major reason why we have seen a decline in the number of successful pirate attacks this year. Therefore, we have recently demarched countries to permit the use of privately contracted armed security personnel on commercial vessels. And we are also working with industry and transit countries to make it less onerous for privately contracted security personnel to transit foreign ports with weapons intended for the self-defense of ships.

We have also shifted our efforts to focus on the pirate leaders and organizers ashore. The focus ashore is essential, as piracy has evolved into an organized transnational criminal enterprise conducted for profit. It is increasingly clear that the arrest and prosecution of pirates captured at sea – often the low-level operatives involved in piracy – is insufficient, on its own, to meet our longer term counter-piracy goals. To maintain the momentum and space for action gained by naval operations, we have begun an effort to identify ways to disrupt these criminal networks and to determine the means to dismantle their financial networks.” Via U.S. Dept. of State

There are some serious flaws in the thought process behind the State Department’s thinking. There is not a single mention of the impact of the thousands of mariners who have been held hostage, abused, beaten and killed. The State Dept seems to have made this decision based on financial rationale.

The U.S. also uses financial fiction to mask its decision. Piracy does not cost the shipping industry billions, the shipping industry makes millions from piracy by passing on the increased surcharges passed on to consumers. The insurance and security industry also makes money from mitigating the threat of piracy. There is nothing amoral about providing these necessary services but the ability of pirates to make millions from piracy is a direct result of the international nations doing little to nothing about ending piracy. Piracy is rooted in a handful of remote windblown ports and seaborne “action groups” monitored daily by the navies in the area. The regional governments of Puntland and Somalialand (along the other nations) have fat dossiers on the names, locations, cel phone numbers and associates of the pirates.

U.S. and UK support of the private security industry is simply a long delayed appointment with reality but still an abrogation of moral duty to protect mariners by ending piracy, not just frustrating it for profit.

Comments Off on U.S. Goes Public with Support for Hired Guns Against Piracy