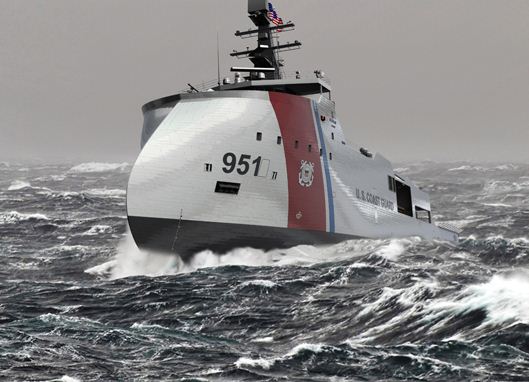 ULSTEIN has over time been cooperating with the American shipbuilding group Vigor Industrial in the development of the conceptual design for a coastguard vessel (OPC – Offshore Patrol Cutter). Vigor is now announcing ULSTEIN’s SX151 design in the United States as part of a campaign aimed at the U.S. Coast Guard, that plans to renew its fleet with up to 25 new ships.

“We have worked together with Vigor for two years, and have developed a concept we have great faith in. The ship is 100 metres long and 16.4 metres wide and has a top speed of 22 knots. A typical operating speed can vary from 5 to 22 knots, and the ship is therefore equipped with a combined diesel mechanic / diesel electric propulsion system. The ship accommodates 124 persons, is equipped with a helicopter deck and hangar, and a hangar for three rescue boats,” says Deputy CEO, Tore Ulstein, responsible for Market and Innovation in Ulstein Group.

This is a long-term project: “Several yards are currently sending their prospects to the Coast Guard. Towards the end of 2014 or beginning of 2015, the Coast Guard will award the contract”, says Ulstein.