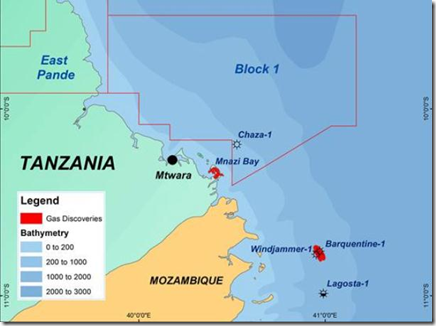 The partnership of BG Group (60 percent and operator) and Ophir Energy (40 percent) have had exploration successes in all four wells so far drilled in Tanzania, with mean total gross recoverable resources currently estimated to be approaching some 7 tcf of gas.

Jodari-1 is located approximately 24 miles (39 kilometers) offshore southern Tanzania and in a water depth of 3,770 feet (1,150 meters). It is part of the current three-to-four well exploration program, which also includes the acquisition of 965 square miles (2,500 square kilometers) of 3D seismic data in Block 1.

The next target for drilling is the Mzia-1 location in Block 1, some 14 miles (23 kilometers) to the north of Jodari-1. The discoveries announced previously are Chaza-1 in Block 1, and the Chewa-1 and Pweza-1 discoveries in Block 4.