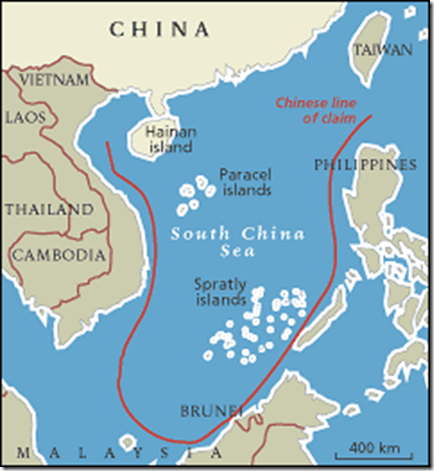 Even as world attention is mesmerized with the Strait of Hormuz, worrisome problems are now arising in the South China Sea, a region along the all-important energy sea lane of communication out to Asia Pacific.

‘You have this conundrum of a region that needs energy and yet has a lot of territorial disputes or gray areas that inhibit the ability to produce some of it,’ said Robert Hormats, U.S. undersecretary of state for economic growth, energy and the environment.

Hormats’ remarks came after the Philippines said that it has the right to invite foreign companies to explore for oil and gas in waters located between its western coast and the South China Sea – remarks dismissive of China’s own claims.

‘It is illegal for any country, government or company, without the Chinese government‘s permission, to develop oil and natural gas in waters under Chinese jurisdiction,’ said Chinese foreign ministry spokesman Hong Lei.

The dispute arose after the Philippines’ Energy Secretary Jose Almendras announced that his country had invited international oil companies to explore for oil and gas offshore Palawan province in two areas that fall within the country’s 200-mile exclusive economic zone.

Palawan province faces the South China Sea, which is claimed entirely by China. But other nations in the region, including the Philippines, Brunei, Malaysia, Taiwan and Vietnam, have competing claims of their own.

Claims over portions of the sea can have immense bearing on ownership of any oil or gas that lies under the region’s waters, according to the U.S. Energy Information Administration. But no one knows for sure just how much oil and gas is actually there.

According to EIA, one Chinese estimate suggests potential oil resources as high as 213 billion barrels of oil (bbl), but EIA also mentions a 1993/1994 estimate by the U.S. Geological Survey which put reserves at just 28 billion bbl.

EIA notes speculation that the Spratly Islands could be an untapped oil-bearing province, but it said that, ‘There is little evidence outside of Chinese claims to support the view that the region contains substantial oil resources.’

Of course, there is only one way to find out and that is to explore, explore, explore. The problem, though, is that overlapping claims to the region are hindering exploration.

That was certainly true a year ago when two Chinese vessels threatened to ram the Veritas Voyager, a survey ship hired by U.K.-based Forum Energy PLC.

The Philippines government dispatched a surveillance plane, patrol ships and light attack aircraft to the disputed area, known as Reed Bank. By then, though, the Chinese vessels had vanished and Forum decided to suspend its exploration activities.

Now, a year on, Forum Energy apparently is planning to return to Reed Bank, aiming to drill its first well for oil and natural gas, an event that some analysts say could spark a military crisis if China responds more aggressively than it did last year.

Still, that year has seen a significant change in the posture of the U.S. in the region, with President Barack Obama announcing in January that Asia Pacific is now his country’s top priority in terms of global defense.

That view was underlined in early March by Admiral Robert Willard, head of the U.S. Pacific Command, who said that the America’s military must be present in the South China Sea.

China was less confrontational in 2011 in asserting its claims in the South China Sea than it was in 2010, Willard told the Senate Armed Services Committee.

But Willard also noted that China continues to challenge vessels conducting oil and gas exploration within space that it claims as its own. In a word, he said, ‘They remain aggressive.’

Just how aggressive they will remain is yet to be determined, perhaps by U.S. plans for war games in April with the Philippine navy near Reed Bank – war games that one analyst suggests will be viewed by China as provocative.

‘This will be a litmus test of where China stands on the South China Sea issue,’ said Ian Storey, a fellow at the Singapore Institute of Southeast Asian Studies.

According to Storey, the Chinese ‘could adopt the same tactics as they did last year and harass the drilling vessels, or they might even take a stronger line against them and send in warships.’