Obama will be in Cushing, Okla., the start point of the pipeline’s southern half on Thursday 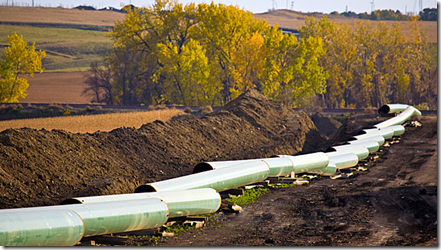 U.S. President Barack Obama is reportedly set to announce in Oklahoma this week that he’s expediting the permit process for the southern half of TransCanada’s controversial Keystone XL pipeline.

Citing a senior administration source, CNN reported on Tuesday that Obama wants to slash several months off a permit approval process that can ordinarily stretch on for as long as a year.

The administration wants to speed things up to deal with a glut of oil in Cushing, Oklahoma, where crude from the Midwest runs into a logjam on its way to refineries on the Gulf of Mexico.

Obama will make the announcement Thursday at a storage yard in Cushing, the starting point of the pipeline’s southern half.

Pipes that will be used to build Keystone XL to the Gulf Coast are being housed at the facility.

The announcement comes as prices at the pump continue to soar. Republicans are blaming Obama’s energy policies for rising gas prices and continue to attack him for rejecting Keystone XL in January.

The U.S. average price for a gallon of gasoline rose for the 11th straight day on Tuesday to $3.85 US, and soared to $4 a gallon in some states. That would amount to a little over a dollar a litre in Canada.

Millions of barrels of unrefined crude are sitting in storage facilities in North Dakota, in particular, but there’s a lack of pipeline capacity to carry it to the Gulf Coast and a limited number of rail cars that can transport the oil south. The state is currently in the throes of a major oil boom thanks to the discovery of the so-called Bakken Shale.

Obama’s recent praise of Calgary-based TransCanada’s decision to proceed with the construction of the southern segment of the pipeline signalled a shift in attitude from the White House after it rejected the pipeline outright in January.

The entire length of the proposed, $7.6 billion pipeline would stretch from Alberta’s oilsands through six U.S. states to the Gulf Coast.

No decision from State Dept.

The U.S. State Department has yet to make a decision on the pipeline, saying it needs more time to conduct a thorough environmental review of a new route around an environmentally sensitive aquifer in Nebraska. State department officials are assessing the project because it crosses an international border.

In November, under mounting pressure from environmentalists, the State Department deferred making a decision on Keystone until after this year’s presidential election, citing concerns about the risks posed to the aquifer.

Pipeline proponents cried foul, accusing Obama of making a cynical political move aimed at pacifying the environmentalists of his base and improving his chances of re-election.

Within a month, facing a mid-February deadline imposed by that measure, Obama nixed TransCanada’s existing permit outright, saying there wasn’t enough time to thoroughly review a new route before giving it the green light.

But Obama also assured Prime Minister Stephen Harper that the decision did not reflect on the pipeline’s merits, but was merely necessitated by Republican pressure tactics. He welcomed TransCanada to propose another route.