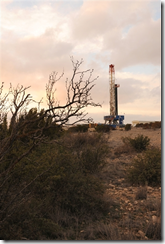 U.S. oil production is enjoying a renaissance, thanks to new technology that has made oil recovery possible in tight shale rock.

The busy Bakken formation in North Dakota and Montana is the largest and best-known oil shale play.

The Eagle Ford in South Texas and the Barnett “combo play” (gas and oil) in North Texas are also fairly famous unconventional plays.

But the Wolfcamp Shale?

“Over the next two or three years, everybody is going to be making a beeline to the Wolfcamp,” said Scott Sheffield, chief executive of Pioneer Natural Resources (PXD).

Its location in the Midland Basin is within the larger Permian Basin.

Sheffield and other oil experts say the Wolfcamp is probably the thickest of any onshore U.S. oil shale play, with up to 1,000 feet of potential payout across hundreds of thousands of acres.

“It will be the biggest, and it is already the thickest,” Sheffield said. “So it’s got the most pay zones of any oil shale play in the U.S. I call it the third or fourth coming of the boom in West Texas.”

If Wolfcamp does turn out to be the next big oil shale play, Pioneer is on the ground floor. With 900,000 acres under lease in the Spraberry, it has the largest land position.

Pioneer believes that more than 400,000 of those acres are ripe for horizontal drilling.

Its game plan: drill 10,000 feet down through the Spraberry to the Wolfcamp and then out 7,000 feet horizontally.

For now, it’s targeting 200,000 acres in the southern portion of the Spraberry field.

Pioneer’s two completed wells in the Wolfcamp have already exceeded expectations, each producing 800 to 1,000 barrels of oil a day, and they’re still early in production.

EOG Resources (EOG) started drilling in the Wolfcamp earlier and is now seeing higher output from its 35 or so wells.

But Sheffield says Pioneer will be a bigger operator in the Wolfcamp in the sense that it has 400,000 prospect-worthy acres to EOG’s 100,000.