← Israel to delay strike on Iran until after US elections?
Cruiseships Move to LNG → 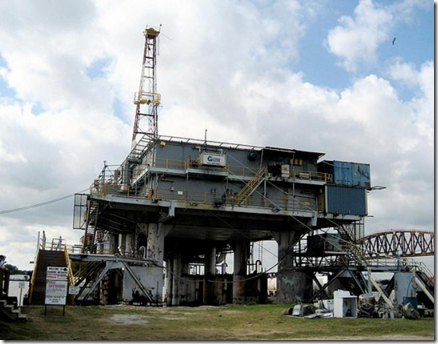 ASME wil name Mr. Charlie a Historic Mechanical Engineering Landmark at a ceremony to be held March 17, 2012, in Morgan City, La., where the rig is moored

Built in 1952-53 and placed into service in the Gulf of Mexico in 1954, Mr. Charlie was the world’s first submersible and fully transportable drilling rig. Its drills and other machinery were installed on a 220-foot floating barge, which allowed a company to tow Mr. Charlie from one location to another in the search for reserves in the oil-rich waters of the Gulf. Once Mr. Charlie was situated over a drill site in depths averaging 40 feet, the giant pontoons were flooded with seawater to enable the vessel to rest on the sand for safe drilling.

Featuring a 500-ton hoist and durable welded construction, Mr. Charlie advanced the practice of coastal oil exploration from the stationary caisson structures used in the early 1950s to a revolutionary moveable rig that allowed an entire field to be drilled.

“Mr. Charlie’s success initiated the modern offshore oil and gas industry,” says ASME in a bronze plaque to be presented to the International Petroleum Museum and Exposition at the March 17 ceremony.

During its lifetime of service from 1954 to 1986, Mr. Charlie drilled hundreds of wells in the Gulf Coast for Shell and other oil companies. The rig, while transformative in its time, became obsolete when the industry began to perform offshore Gulf Coast oil exploration in waters deeper than 40 feet. Mr. Charlie today is a museum exhibit and training facility.

← Israel to delay strike on Iran until after US elections?
Cruiseships Move to LNG →