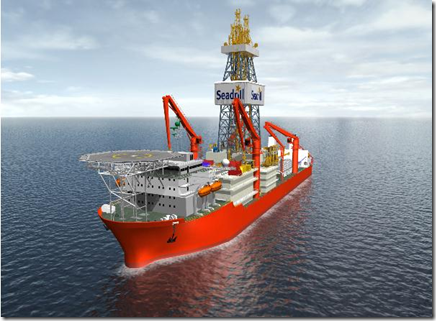 South Korea’s Samsung Heavy Industries on Friday announced that it had received contracts for the construction of two drillships without revealing who the costumer was. Today, Seadrill, a Norwegian/Bermudan offshore drilling contractor confirmed the deal.

The construction of the drillships is scheduled for completion in the second and third quarter 2014. Total project price per drillship is estimated to be under US$600 million, which includes a turnkey contract with the yard, project management, drilling and handling tools, spares, capitalized interest and operations preparations. Seadrill has also a fixed price option to order an additional drillship for delivery in 2014.

The drillships are of the same design as the three previous dual derrick drillships that Seadrill ordered at Samsung late 2010 and early 2011, with increased water depth, technical capabilities and accommodation capacities. These dynamic positioning drillships will have a hook load capability of 1,250 tons and a water depth capacity of up to 12,000 feet targeting operations in areas such as the Gulf of Mexico, Brazil as well as West and East Africa. In addition, these units will be outfitted with seven ram configuration of the Blow out Preventer (BOP) stack and with storing and handling capacity for a second BOP.

Our long relationship with Samsung has given us access to a proven rig design and favourable delivery slots. In combination with attractive global yard prices, this has created an opportunity to continue to organically build Seadrill with very compelling economics. Seadrill will have five new ultra-deepwater rigs scheduled for delivery in the period 2013 – 2014 and four existing units coming off current contracts in the same period. There has already been specific discussions regarding chartering of part of this capacity. We believe the open ultra-deepwater exposure position will serve Seadrill well and create a unique exposure to one of the fastest growing and most profitable energy businesses in the world. We also believe that this open exposure can be used to further strengthen our relationship with fast growing and dynamic oil companies. The recent increase in daily rates for drilling rigs will generate excess cash that can be used for a balanced combination of organic growth and a strong long-term dividend distribution. It is likely that Seadrill’s commitment to tender and ultra-deepwater new buildings will be further increased in the weeks to come.