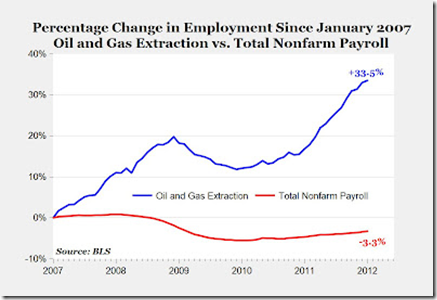 While the overall economy struggles to create jobs during another “jobless recovery,” it’s been a much rosier employment picture in one of America’s most successful “shovel-ready” job-creating industries: Oil and Gas Extraction.
The chart above displays the monthly percentage changes in employment levels since January 2007 for oil and gas extraction jobs compared to total nonfarm payroll jobs.  As of January 2012, payroll employment is 3.3%, and 4.7 million jobs, below the month of January five years ago.  In contrast, the explosion of new oil and gas jobs has increased employment in that industry by about 1/3 since January 2007.  Over the last 12 months, oil and gas companies have added 23,200 new workers, at a rate of almost 100 new hires every business day.