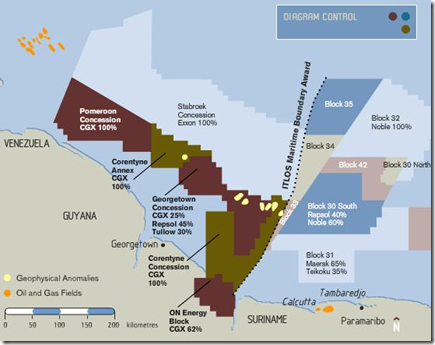 The Eagle-1 well will be drilled to a depth of 4,250 metres to test the Eocene and Maastrichtian geologic zones. The well is being drilled by the Ocean Saratoga semi-submersible drilling rig owned by a subsidiary of Diamond Offshore Drilling, Inc. DO +0.89% , a leading drilling contractor with over 40 years of global drilling experience. Drilling is expected to take approximately 60 days.

Steve Hermeston, President and CEO commented, “Today marks a significant milestone in the history of CGX. We are returning to drill the Eagle prospect that was halted in June 2000 due to overlapping maritime border claims between Guyana and Suriname. Renewed exploration follows over seven years of dedication and co-operation between the Government of Guyana and CGX in resolving the Maritime Boundary between Guyana and Suriname peacefully and finally through the International Tribunal of the Law of the Sea (ITLOS) process. Following the resolution of the maritime border, CGX has shot two-3D seismic surveys, creating a portfolio of prospects on the Corentyne PPL, Eagle-1 being the first well to be drilled to test the original Eocene prospect, plus a deeper Maastrichtian prospect, both of which are stratigraphic tests. The current location will significantly benefit from the 3D acquired in conjunction with advances in better understanding the optimal position to test reservoirs deposited in deep water environments.”