← Tuscaloosa shale promising
Deep-Water Lifting: A Challenge for the Industry → 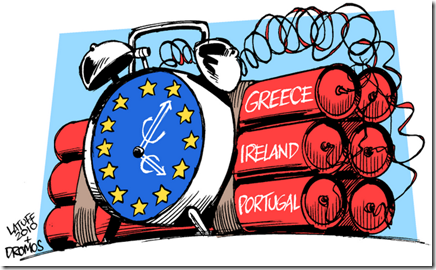 Let’s say you earn $21,000 per year. Would your bank grant you credit and loans that total more than $600,000 to “invest” on long shot bets in Vegas? Sounds ludicrous, right? And it is, until you realize this is how our global financial system is currently structured.

Thanks to some fancy (but rigged) modeling of market instruments, market players have been able to convince some incredibly stupid people (though there are some smart ones in the bunch) that their bets will pay off. What the incredibly stupid people don’t understand is that the entire house of cards can only function if lines of credit are kept open. The problem here, as Hyman Minsky warned, is that it’s one thing to borrow when you have the assets to back things up, but it’s an entirely different thing to borrow when the collateral is full of financial holes.

This is precisely the situation Europe faces today, and why efforts to fix their banking system will fail.

Mirroring what I’ve been writing and talking about for years, Money Morning’s Keith Fitz-Gerald explains why Europe’s banks are going under, in spite of the the seemingly never ending trillion dollar rescue efforts from the U.S. central bank, and others. Specifically, Europe’s financial system is confronted by three big challenges.

UNCERTAINTY: Thanks to the murky system of cross derivative (i.e. Vegas-like) bets European Union (EU) ministers are reluctant to put money into a banking system that has the financial consistency of Swiss Cheese (why Ben Bernanke is doing it is another issue). And they should be reluctant. Because derivative markets are so murky, the ministers don’t know how much is going to be needed, or who’s going to need it.

FINANCIAL STDs: Because of the cross pollinization of derivative bets even healthy banks have been exposed to the financial STDs of the financial world. In what will (no doubt) be described as a pre-emptive effort, all banks will be provided with back up funds just in case (i.e. when) their partners drag them under. It’s kind of like an STD screening. But in this case you get the penicillin shots too (a process that resembles the U.S. banking “self-esteem” efforts too).

GOOD MONEY GOING AFTER BAD: Money from strong banks will be diverted to weaker banks. This is bad news. Why? Because in order to backstop the bad bets, even bigger (worse?) bets will be placed because they offer the promise of higher returns. This will only serve to keep the derivative lunacy going until the stupidity collapses on itself, again.

So why is this all a problem? Because the banks have lent or provided $600 trillion against market (derivative) instruments that are valued at $21 trillion. Total exposure here is 28.4-times. Go into a bank and ask them to provide you with a loan or credit totaling 28 times what you earn/own.

The bank’s rationale for rejecting you is exactly why the financial stupidity in Europe cannot be sustained.- Mark

P.S. If you want to know how derivative bets get started click here.

← Tuscaloosa shale promising
Deep-Water Lifting: A Challenge for the Industry →