I could not help noticing that China’s imports from Japan fell 16.2pc in December. Imports from Taiwan fell 6.2pc.  The strong yen strikes again: Honda decides to build a high-performance hybrid Acura in Ohio – instead of its home nation of Japan. The firm’s continued shift in production to North American capacity signals a wider trend of Japan’s automakers to battle currency-related losses by moving operations.

Japan is on life support. The largest buyers of its debt are now sellers.  Japan Post Holdings holds almost 3 trillion dollars of JGB’s and GPIF, the retirement fund, holds over $1 Trillion of JGB’s. Japan Post is the largest financial institution in the world and has 75% of assets in JGB’s and now wants to diversify. The retirement fund is liquidating $80+ billion per year to pay out benefits. I just read that the banks across Japan have 25% of assets in JGB’s. If rates were to move 1% (double), what would be the impact to the capital of the banks?

One argument is that Japan’s banks are going to step in lieu of the big dwindling pensions. I merely point out that the IMF is go to stress test the banks against a modest move higher in rates. That would discourage the banks from buying debt at current levels.

The insurance companies are big holders and the people are getting old and dying. The savings rate is at 2% and headed negative (also demographics). The trade surplus has turned to deficit. The budget for this year was to have more JGB issuance than government revenue (about 50% of spending to be borrowed), then the earthquake hit. There are projections that the end total may approach two thirds of total spending that will be borrowed for the current fiscal year. There are no new large buyers to replace the ones mentioned above, and to sell bonds outside of Japan would require much higher rates. The Japanese people have trusted their financial institutions to the government and the trust has been violated.  The money is gone and the government is not fiscally responsible. This party is about to end.  John Mauldin called Japan, “A bug looking for a windshield” and Kyle Bass, “A giant ponzi scheme that is running out of time”.

Japan is just one insolvent country; there are others. In tandem, the central banks of these nations hold $15 trillion plus in inflated securities, loans and sovereign securities, in one giant Ponzi pool holding increasingly insolvent debt and “liquidity” loans to banks. As defaults and more credit downgrades gather steam (UK, US, France, Germany and others), the markdowns of these $15 trillion will accelerate. It is important to remember that the capital for central banks is provided by the participating govts. For example, this is who backs the tiny $81 billion ECB capital used to lever 2.75 trillion in “assets.”

When central banks (CBs) expand their balance sheets, they buy securities and accept collateral of securities. As such they take risks, especially when defaults occur. And what is the quality of those securities?

These charts are actually dated. The CBs own these markets, use thin capital bases, and are going to be handed the losses on the fictitious capital they hold. Tattoo this on your forehead, CBs hold well over 15 trillion in securities and loans to banks of various and often dubious quality, an immense gamble. These are all ultimately the responsibility of the sponsoring country, and represents a monster contingent liability. That will be the end game.

Barry Ritholz has each CB chart. 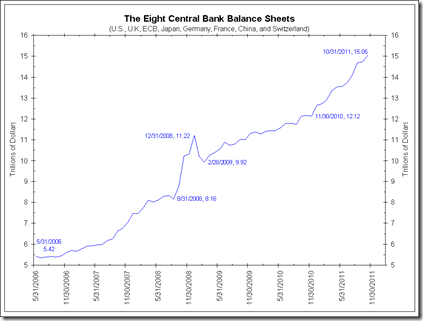