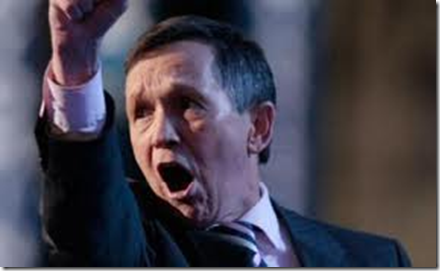 Six House Democrats, led by Rep. Dennis Kucinich (D’OH), have filed a bill aimed at controlling gasoline prices. Styled the “Gas Price Spike Act”, H.R. 3784 would establish a “Reasonable Profits Board” which would have the power to confiscate 100% of oil company profits above a level that they deem to be “reasonable”.

Kucinich is either a naive fool, a craven panderer to his electorate, or a throwback to Soviet-style central planning. That he could find five other elected nitwits (Reps. Woolsey, Langevin, Conyers, Fudge and Filyers) to put their names on such an anti-capitalist, unconstitutional fantasy is an indication that the Far Left Wing of the Democratic Party has left the ranch.

Consider, too, what it says about “Republican” presidential candidate Rep. Ron Paul (R-TX), who recently declared that he would consider Kucinich for a cabinet post in a Paul Administration.

Paul said his libertarian political philosophy helps him connect with some on the far left — including Kucinich, who shares Paul’s general anti-war stance.

Paul joked that if he brought the Ohio congressman aboard in his administration, he might have to create a “Department of Peace.”

“You’ve got to give credit to people who think,” he said.

The Gas Price Spike Act, H.R. 3784, would apply a windfall tax on the sale of oil and [natural] gas that ranges from 50 percent to 100 percent on all surplus earnings exceeding “a reasonable profit.” It would set up a Reasonable Profits Board made up of three presidential nominees that will serve three-year terms. Unlike other bills setting up advisory boards, the Reasonable Profits Board would not be made up of any nominees from Congress.

The bill would also seem to exclude industry representatives from the board, as it says members “shall have no financial interests in any of the businesses for which reasonable profits are determined by the Board.”

Oil companies would only be able to make less than a reasonable profit without penalty. Anything over 105% of reasonable would be taxed at 100%. Proceeds of the confiscation would be dedicated to tax credits for high-milage vehicle purchase and mass transit subsidies for the poor.

Peeling back the layers of stupidity in H.R. 3784 would be akin to peeling an artichoke. In the interest of time, I will cut to my central point.

Implicit in the very suggestion that a Windfall Profit Tax is called for is the notion that somehow the oil companies are able to manipulate the price of oil, and hence, gasoline.

When we refer to the industry as “oil and gas”, we mean “oil and natural gas”, not oil and gasoline. All oil companies make a substantial fraction of their revenue — many more than half — from natural gas.

The price of natural gas has plunged to 10 year lows recently as a result of warm winter temperatures, slack industrial demand and burgeoning supplies.

Natural gas prices have fallen to levels that make it difficult to justify drilling for more. Many of the new supplies of gas that come on will be incidental to the successful search for oil.

I challenge anyone who believes that oil companies control the price of oil and gasoline to explain how they do it, and why they seemingly have no control of natural gas. 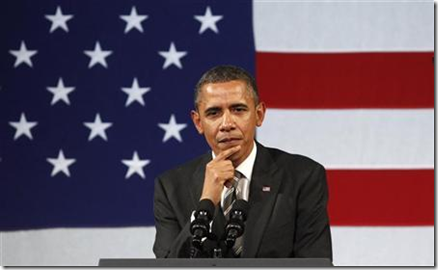 (Reuters) – President Barack Obama, offering a glimpse of next week’s State of the Union address, made clear on Saturday that he will deliver a starkly partisan election-year call for a “return to American values” of economic fairness.

“I’m going to lay out a blueprint for an American economy that’s built to last,” Obama said in a campaign video sent to supporters. “And most importantly, a return to American values of fairness for all, and responsibility from all.”

A reference to values is usually political code for social and religious issues, a rallying cry for conservative Republicans who want to deny the Democratic president a second White House term in November.

But Obama, who delivers his annual State of the Union address to Congress on Tuesday night, is running for re-election on his claim of being a champion for the middle class, while trying to paint Republicans as the party for the rich.

“We can go in two directions. One is towards less opportunity and less fairness. Or we can fight for where I think we need to go: building an economy that works for everyone, not just a wealthy few,” Obama said.

He is expected to use the speech to repeat calls for higher taxes on the wealthy, tax breaks to bring American manufacturing jobs home, steps to aid the housing market, and another nudge to China on currency flexibility to aid U.S. exports.

Republicans, who were holding a closely watched primary election in South Carolina on Saturday to help select their nominee to face Obama, say he is an old-fashioned tax-and-spend liberal whose policies hurt business and jobs.

Obama’s suggestions are therefore unlikely to make much headway in Congress, where Republicans control the House of Representatives.

Attacking congressional Republicans on their own turf, during a prime-time televised joint session of Congress, signals a de-emphasis on appeals for cooperation that have marked Obama’s previous State of the Union addresses.

Obama campaigned in 2008 on a message of reaching across the political aisle to change the way that Washington works, but now complains that Republicans have obstructed his efforts to collaborate and are only interested in seeing him fail.

Republicans say they oppose his policies because they view them as bad for the country, and say they are willing to work with the president on areas of genuine common ground.

Polls show Americans are fed up with gridlock in Washington, but tend to blame congressional Republicans more than the president for the state of affairs.

Obama said he would focus on American manufacturing “with more good jobs and more products stamped with Made in America,” American energy, and skills for American workers as key parts of his plans for the economy.

“They’re big ideas, because we’ve got to meet this moment. And this speech is going to be about how we do it,” he said.

He is expected to emphasize incentives to encourage lenders to refinance underwater mortgages, which would ease a crucial obstacle to a recovery in housing and the broader economy.

He has also said he will put forward tax breaks to reward companies that bring jobs home to the United States, while eliminating tax benefits that outsource jobs overseas, and has repeatedly stressed wealthy Americans should pay more in taxes.

Obama has proposed a so-called Buffett rule, named after the billionaire Warren Buffett, who supports the president and says it is unfair that he pays a lower tax rate than his secretary because most of his income is taxed as capital gains.

Mitt Romney, a top Republican contender to face Obama and one of the richest politicians to vie for the nomination, this week disclosed he paid a tax rate of around 15 percent, because most of his income comes from investments.

Republicans say Obama is playing the politics of envy and what Americans really care about is jobs.

Voters do rate the economy as one of the most important factors in the upcoming election, and while U.S. growth has picked up, it remains fragile and unemployment, at 8.5 percent, is still high by historical standards.

Obama departs on Wednesday for a five-state, three-day tour to promote the framework he will highlight in the address, including visits to Las Vegas and Denver that were hit hard in the housing downturn, and to Detroit, home to the U.S. auto industry that Obama helped rescue through a taxpayer bailout. 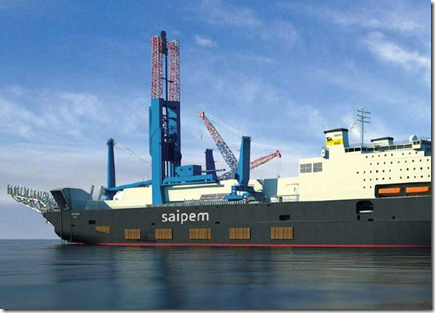 Saipem has signed an EPCI contract with INPEX for the Gas Export Pipeline (GEP) on the Ichthys LNG Project in Australia.

Saipem’s scope of work will include the Engineering, Procurement, Construction and Installation of 889 kilometres of a 42-inch-diameter subsea pipeline, in water depths of up to 275 metres, connecting the offshore central processing facility to the onshore processing facility in Darwin.

Offshore activities will be carried out during 2014 by the newly-built Castorone pipelay vessel. The recently upgraded Semac 1 pipelay barge will be employed for the shallow water section.

The Ichthys LNG Project is a Joint Venture between INPEX (76%, the Operator) and Total (24%). Gas from the Ichthys Field, in the Browse Basin, approximately 200 kilometres offshore of Western Australia, will undergo preliminary processing offshore to remove water and extract condensate. The gas will then be exported to onshore processing facilities in Darwin via an 889 kilometres subsea pipeline. The Ichthys Project is expected to produce 8.4 million tonnes of LNG and 1.6 million tonnes of LPG per annum, along with approximately 100,000 barrels of condensate per day at peak. 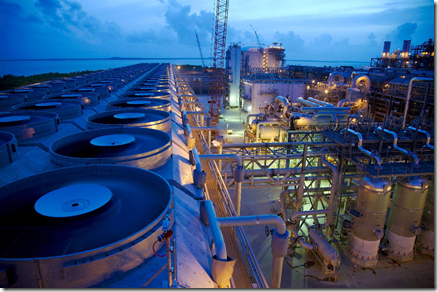 The Center for Liquefied Natural Gas (CLNG),  yesterday said that the Energy Information Administration’s (EIA) report on the effects of increased natural gas exports on domestic gas markets is only part of a larger picture of how LNG exports will impact the U.S. economy and does not account for increased economic activity, decreased U.S. trade deficit and increased job creation that it expects will be revealed in a forthcoming macroeconomic study.

In August 2011, the Department of Energy’s Office of Fossil Energy requested that the EIA prepare the report.

The Office of Fossil Energy has also requested a second study from a third party contractor, which will analyze the macroeconomic effects of increased natural gas exports. The third party study is expected to be released later in the first quarter of 2012.

“The EIA study is just a part of the overall analysis on the economic effects of natural gas exports,” said Bill Cooper, president of the Center for Liquefied Natural Gas. “The third party report will provide a more complete economic picture by focusing on the broader macroeconomic effects, which we believe will be positive.

“The EIA study’s predicted natural gas price increases do not account for increased economic activity, decreased U.S. trade deficit and increased job creation that we expect will be revealed in the forthcoming macroeconomic study on LNG exports. GDP growth, job creation and offsetting the U.S. trade deficit would be beneficial in neutralizing any potential price effects. For example, the LNG industry expects each new export project to create thousands of jobs in the natural gas sector and related industries.

“With a 100 year supply of natural gas and more supplies being discovered in new resource areas, the United States is well positioned to meet both the domestic needs of our country and to provide clean burning natural gas to new markets. As the EIA study noted, the vast percentage of exports would be supplied by additional natural gas production. As history has taught us, the natural gas industry overwhelmingly responds to meet new markets, far beyond current-day predictions.

“Markets should ultimately decide whether or not the U.S. should engage in natural gas exports in the future, which is consistent with the long-standing policy of the Department of Energy. America’s free trade policy allows for economic growth and job creation by encouraging exports for all kinds of products, including for energy,” said Cooper.

EIA’s report examines four possible export scenarios. These scenarios consider variables of either 6 Bcf/day or 12 Bcf/day of increased natural gas exports, increasing by 1 Bcf/day per year or 3 Bcf/day per year.